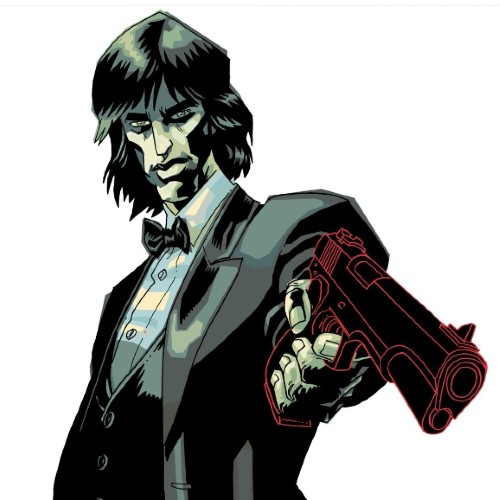 “Casanova” is such a well-constructed piece of comic fiction that, instead of talking about a whole volume of what is now a nearly fourteen-year-old comic, this review will focus on just the first issue. Hopefully, this small taste of the madness that the creative team has created will be enough to entice you into diving into this complex and manic masterpiece. 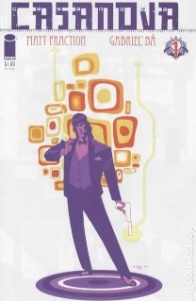 Casanova Quinn is a professional thief. What seems like a routine job stealing a ruby ends up with him being captured by his father’s spy network, E.M.P.I.R.E., and taken straight to his sister’s funeral. He then engages in a psychic battle with Fabula Berserko, an entity that may or may not three monks who mind-melded together, jumps out of a plane, pushes the button on a doohickey, and wakes up in what appears to be France, six days later. Casanova then meets Newman Xeno, the head of a global theft and terror network. Xeno informs Casanova that he has pulled Casanova out of his timeline into another one, with the aim of bringing down Casanova’s father’s spy organization from within. Casanova repeats the ruby heist in this timeline, returns to E.M.P.I.R.E., and…

Yes, all of that happens in the first issue. Yes, that is a brief summary. Yes, that cliffhanger description is necessary. That should give an idea of just how breakneck the pace of Casanova is. The issue begins its life as a breezy spy caper, complete with characters giving humorous asides and mid-battle quips. It then takes a hard turn to science fiction, with Casanova battling Berserko aboard a gambling city in the sky. The two genres then come crashing together as Casanova jumps through timelines in a desperate bid to stay alive. The reader is introduced to more places, organizations, characters, and people-that-are-not-people-but-are-actually-sex-robots than should be possible in one issue of comics, and yet Fraction, Bá, Peter, and Hardin pull it off.

It does this by never taking itself too seriously. The whole issue gives off a slight air of a spy parody film a la Airplane! or Top Secret!, with doses of post-modernism thrown in. There are certainly a couple of heavy emotional beats. With these, Fraction allows each moment to have its space but the issue is never bogged down in them. It’s only a panel or two before Casanova and the rest of the characters are embroiled in the next crisis.

Matt Fraction has stated that his original vision was to have seven arcs of Casanova: one named after each of the seven deadly sins. The first issue is the beginning of the arc named ‘Luxuria’, Latin for lust, and the theme of lust permeates each page. The initial heist Casanova has to pull goes awry in part due to robotic escorts. Casanova beds an E.M.P.I.R.E. employee in order to obtain an item necessary to his mission. This ever-present sexuality fits well within the spy genre, and many characters are rendered with an abundant seductive appeal.

“Casanova” was one of the first comics that brought Gabriel Bá to the attention of the wider comic world, and the first issue of the series makes it easy to see why. His uniquely stylized art and distinctive linework make each panel of “Casanova” #1 ooze with zest and life. For the rest of the series, Bá would alternate art duties with his fellow Wonder Twin, Fábio Moon, with each doing the art for an arc before passing to the other. The differences in style between the two added another layer of depth to the series, but the core visual aspects of “Casanova” are all remarkably well-established in this first issue.

Cris Peter and Dustin Harbin’s work turns what could be a visually cluttered comic into one of surprising clarity. Peter’s color palette starts off muted, to match the stealthy antics of Casanova in the early pages of the issue, only to rise to the level of bombast bursting from every panel as the pages turn. Characters and locales have distinct color schemes that match their tone superbly and help the reader to keep up with the non-stop action. Harbin’s lettering further aids the reader by serving up Fraction’s constant stream of words in a clear and easy-to-follow manner, while maintaining its own visual identity.

The first issue of “Casanova” is an example of a creative team coming together to execute a singular vision, and doing so masterfully. A comic this dense and graphic may not be for every reader, but it is a treat for those who desire a madcap tale that uses the tools that the medium of comics provides to their fullest. Whether you’ve never read “Casanova” before, or eyeing it for your umpteenth re-read, the first issue lays down a marvelous exemplar for this unique series.