With ‘Sour Grapes,’ its 12th collected volume, “Chew” does something impressive: it ends its story on its own terms, in a tone and manner consistent with everything that came before. Even though John Layman and Rob Guillory were obviously working from a plan since they set out (in the afterward, Layman mentions that the ending they turned in was the same one he pitched aeons ago), the book undoubtedly evolved and developed into some other entity. Yet, as this final volume shows, “Chew” never lost any of its manic sensibilities or drive, becoming a singular achievement from the world of the direct market. 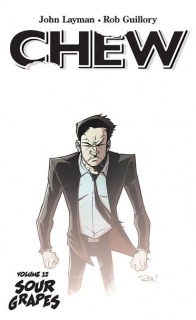 The final story arc of Tony Chu, the cibopathic federal agent with the ability to get psychic impressions from what he eats. Mysteries are solved, secrets are revealed, and lives are lost. Many, many lives. This is the end of the line for the New York Times bestselling, Harvey and multiple Eisner Award-winning series about cops, crooks, cooks, cannibals, and clairvoyants.

“Chew” accomplished so much by going against expectations. Throughout its nearly eight-year run, Layman and Guillory introduced all manner of plots, characters, and devices. They fully embraced some tropes, while others they completely subverted, leaving you constantly guessing how their story was going to play out. For instance, the narrative seemed to heading toward an epic final confrontation between Tony Chu and Mason Savoy, with all the repeated, Potter-esque “Only one will live while the other feasts on their corpse” talk, but the previous volume ends with Savoy killing himself, leaving Tony with a wealth of information about the sky writing and Tony’s final purpose. Most of this volume deals with him coming to terms with his destiny.

Layman and Guillory were mostly able to take their subversions, digressions, and tangents and turn them into something that felt wholly original without ever being alienating. And when they stumbled (I’m still kind of confused/confounded by ‘Major League Chew,’ to be honest, especially its placement within the series), they still managed to bring everything back around.

I bring this up because in many way, “Chew Volume 12: Sour Grapes” is a concentrated version of the whole series. Not just the aforementioned playing with tropes and embrace of seemingly random conventions, but also in its humor, imagination, bizarre attitude, energy, and heartbreak. Layman and Guillory introduce even more food-based powers for Tony to absorb, more weird deaths for them to investigate, and more cryptic messages written across the sky. They also kill off more of your favorite characters.  On top of that, like many concluding chapters of longer series, it revisits and plays homage to its own history. We recognize the cycles. We get one more jaunt through this world.

(We also get another Poyo adventure, this time as he saves Christmas from his new place as ruler of Hell. It features some of Layman’s most unhinged humor and Guillory’s most energetic approach. That freedom to be ridiculous makes it even more memorable.)

Guillory goes all out on his part. He amps up the level of background jokes, sure, but there’s something more focused in his layouts and compositions. He’s constantly balancing warring emotions and tones You never feel like this world isn’t in chaos and pandemonium, even when Tony and Amelia are wandering around, doing their best to ignore the apocalypse. And, after 60 issues, he obviously knows what works and what doesn’t for this world, so his instinct of when to overload the page with detail or how to best present a splash page have become incredibly effective.

Of course, the biggest question is how does this work as an ending? And I would say “Chew Volume 12: Sour Grapes” is the most “Chew” ending you could have ever expected. Most of the questions aren’t answered until the final pages. And, as Layman and Guillory remind us, throughout this investigation, these characters have endured a whole lot, and they’ve changed drastically for it. But they’ve also changed in ways consistent with their personalities. The last page definitely elicits a chuckle, but when you realize a little bit later, that it’s a massive pun, it becomes even more hysterical. The ending gives some closure for Tony and his family, but it makes sure not to shut every door, leaving us with a world that’s going far beyond this story. (I mean, I hope there’s not a sequel, since “Chew” definitely ends conclusively.)

Ultimately, “Chew Volume 12: Sour Grapes” is a fitting end to the series. Filled with wild artwork, ridiculous circumstances, and a set of deeply human characters, it’s everything about the series contained within its covers.

Final Verdict: 8.5 – A nice blend of everything “Chew”, while also offering some strong closure.