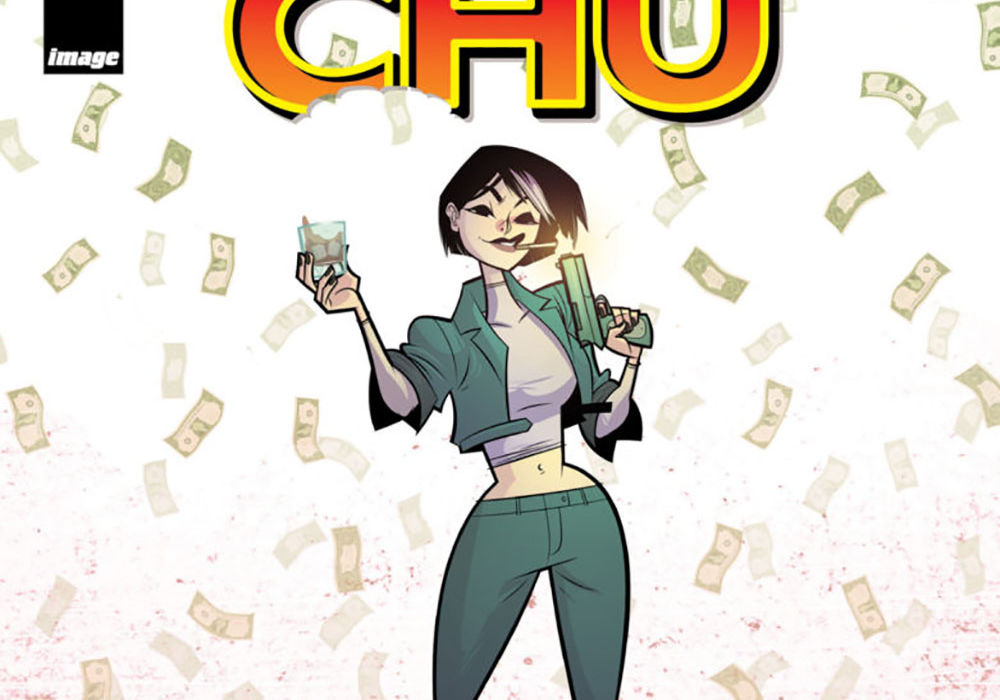 It’s a very unusual game of cooks and robbers as readers have their first bite of a new story in the universe set up by “Chew!” 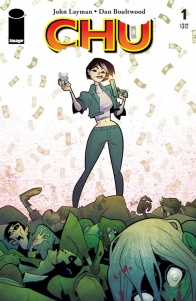 “THE FIRST COURSE,” Part One

TONY CHU is a cibopath, able to get psychic impressions from what he eats. SAFFRON CHU is a cibopars, able to learn secrets from who she eats with. Tony is a cop. Saffron is a criminal. They are brother and sister, and they are on a collision course. Spinning out of the multiple Eisner Award-winning and New York Times bestselling series CHEW comes CHU, a felonious new food noir about cops, crooks, cooks, and clairvoyants.

The universe of “Chew” is an unusual one to be sure. Food is serious business, and business can involve some very serious behaviors revolving around food. As John Layman prepares his appetizer for a new story there in “Chu” #1, he is working against an already-completed tale and the preconceptions that go along with it. Can he cleanse readers’ palettes of the prior tale sufficiently to begin anew in a very different context for the prequel starring the prior protagonist’s sister, described by its author as the Better Call Saul to the Breaking Bad that is “Chew” in terms of the two tales’ connections and accessibility?

In a single word: yes. Essential to any first issue in a new story, “Chu” #1 requires little to no prior reading. Any plot elements important to understanding the basics of the culinarily-focused narrative are explained through single-page exposition that is presented efficiently and humorously. Interestingly enough, the characters with increased focus are not deliberately explained beyond their basic jobs and names, with Layman electing instead to use physical action, rather than verbal exposition, to describe what exactly is going on and give a tantalizing taste of what is going on for newcomers and veteran readers alike.

Perhaps thanks in part to him continuing to write in the world of “Chew” through crossover appearances since its conclusion, Layman has not lost his touch in the slightest, from the plot to his work as letterer allowing him to tell the story precisely the way he personally envisioned in terms of word choice and presentation. While the story does revolve around what is essentially a police drama, taking the side of organized crime through Saffron Chu rather than her older brother Tony’s position as an officer means there is a different tone altogether. At times, Layman’s writing comes across not dissimilar from that in the film Reservoir Dogs, albeit with most of the situational humor coming not from the ridiculously mundane topics of conversation between criminals, but rather from how everyone in the story takes their food very seriously. It is not clear if everyone in the crew has some kind of supernatural power or another, but the writing seems to act as though at least certain members are. Also similar to Quentin Tarantino’s famous film, it doesn’t take long for things to go wildly off the rails, turning the story on its head in a way that merges a look at this multi-family mafia of cooks (et al.) with a deeper mystery of why exactly it went so poorly. Add in a dash of family members on both sides of the law, with only one aware of the other, and you have a recipe for high intrigue along with all of the rest that still hasn’t taken too much time to simmer.

Much like in “Chew,” there is only one person taking up the dual roles of illustrator and colorist for “Chu” #1: Dan Boutlwood. As described by Layman himself, Boutlwood has a style that is unique, but not too dramatic of a departure from prior artist Rob Guillory. That said, compared to his predecessor, Boutlwood’s approach is a bit more cartoonish, a bit more deliberately action-oriented, focused on motion of people over their internal emotions. The use of wider shots and having the main protagonist be decidedly less gruesome in the use of her abilities (such as they are, or are not, shown) means that, even with the concentration being on the “bad guys” in common storytelling of this type, the overall artwork seems comparatively softer. Though there is an on-panel death, the speed of it and how the story does not dwell too heavily on it or give too much detail in close-ups allows the effect to be, while not peaceful, at least relatively lighthearted, owing to taking a far less “gritty” approach overall. As a result, Saffron is shown to be less overtly tied into the grime of the city despite being one of its criminals, in ironic contrast to her older brother having a closer connection to those very same parts in spite of fighting against them.

A large part of why this more stylized approach to the artwork is so effective is Boutlwood’s use of color. Bright colors are brighter, darker hues sharper as well. There is far less use of one-scene color theme changes for immediate shifts in tone, allowing the story to instead flow naturally from one bright piece to the next. The only exceptions come when using powers, from a sepia tone to a flashback with the exception of bright pink on individual food or drinks to the customary orange variations that come with Tony Chu’s cibopathy. In this way, there is a concentration in on the key narrative and world of “Chu” #1 without making things seem too ridiculous, nor quite as intense as the original series.

Most notable is the use of shading, particularly in terms of actual shadows. While there is indeed a focus on where light comes from, there is no gradient from one part of the area out of the light to another. Instead, the entire piece in shadow has the same shade amount, as if a darker portion and a lighter one were glued together. Rather than seem badly handled, this approach makes for a good connection to the relatively “exaggerated” style, and helps to keep the entire thing both together and distinct from its chronological successor series.

Final Verdict: 7.5– Crime drama sits down for a family dinner as this meal gets a definite thumbs up.