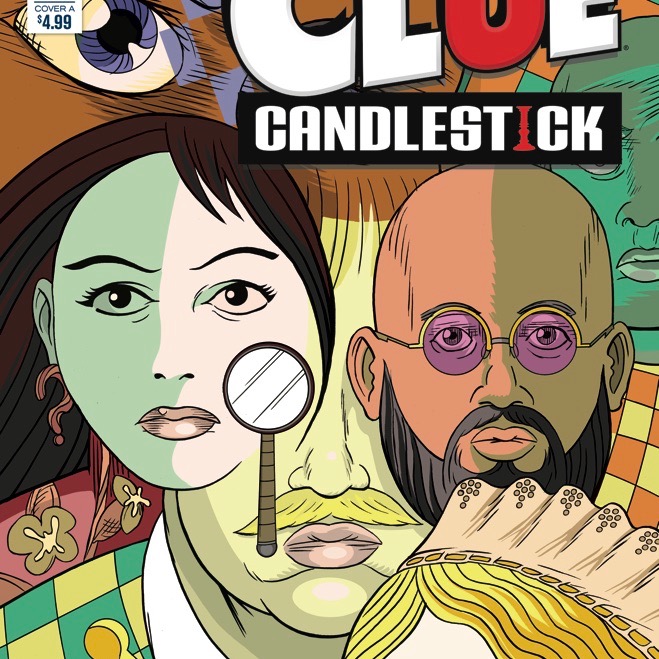 Games, puzzles, puns, witty dialogue and phenomenal art, “Clue: Candlestick” #1 is the uncompromising vision of an auteur who’s not afraid to throw the rulebook out the window. (Warning: may contain minor spoilers.) 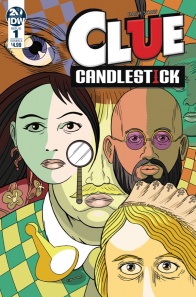 All of your favorite suspicious characters are back in this new brain twister based on the timeless detective game. Ripe with puzzles, secrets, and lies, in CLUE: CANDLESTICK everyone’s a suspect! Cartoonist auteur Dash Shaw unleashes his murderous imagination on the quirky, thrilling and mysterious world of Clue!

A few days ago, I stood at the grocery store transfixed by a huge endcap display of M&Ms candy bars. As I stared a the bright, colorful wrappers that run the gamut from classic yellow (peanut) and brown (milk chocolate, aka “plain”) to the more recently added, less familiar blue (crispy rise), tan (almond) and green (crispy mint), I wrestled with the profound betrayal of the original value proposition: “Melts in your mouth, not in your hand.”

What the hell is going on here?

Since 1949, the marketing whiz bangs have told us the primary advantage of M&Ms is that they are fundamentally different from a sticky, gooey candy bar whose sole objective is to melt in your hand in order to cause such an unholy mess you’ll never live it down. Now, suddenly, seven decades later we’re supposed to chuck that lifestyle out the window and switch sides to Team Candy Bar, as if we don’t already know that path is fraught with certain peril?

Obviously, I’m still a bit bitter, but I say all of this to suggest that when so-called auteurs start messing about with certain iconic brands and foolproof formulas, they’d damn well better have a pretty unique and compelling vision. Trust me, I’m not exactly a traditionalist, but just because you can add things like almonds, pretzels, caramels, crispy rice and Thai coconut peanuts to the mix, doesn’t necessarily mean that you should. Inspired artistic flourishes, clever details and ingenious additions still need to conform to the original creative intent. Somewhere along the line, we’ve all seen “wildly imaginative” reboots that totally suck.

Coincidentally, the board game Cluedo – simply known as Clue in North America – was originally published in the U.K. in 1949, making it the same vintage as plain old M&Ms. Since that time, however, the two brands appear to have diverged pretty sharply. One has continued to be informed by nostalgia, largely adhering to its original configuration while continuing to tinker with pretty inconsequential details. The other brand, by contrast, seems to be driven by the need to keep things fresh, bold and imaginative in order to attract new fans and stay relevant.

“Clue: Candlestick” #1, written, illustrated and lettered by Dash Shaw, is the peanut jalapeño version of a comic book adaptation. You may not entirely love it, but damn, you’re not gonna forget it.

From laugh-out-loud lines of dialogue like, “Tell Ketchup I loved him,” to “We’ll lay Mustard by the ham,” this issue is jam-packed with witty verbal and visual allusions to the classic board game from which it derived. Naturally, some of these references work much better than others. The checkerboard motif and character color palettes, for example, are expected yet not overdone. The incorporation of game pieces as stone, decorative art objects, on the other hand? Meh, I’m not so sure. At this point, oversized game pieces feels arbitrary and a bit forced, but then again, who knows? Like virtually everything else in the book, stick a pin in it. In the end maybe it’s not a random artistic choice, but a vitally important clue. (Certainly, the presence of one character’s key left under her corresponding metaphorical game piece would seem to suggest it’s well worth noting.) Or maybe the game pieces aren’t actually metaphors at all, but something else altogether different….

Right from the very first page, Shaw will no doubt have you second-guessing yourself nearly every step of the way, carefully rereading, reexamining and painstakingly poring over every word and image, scanning them all for clues and overlooked details. Honestly, it can feel pretty intense. But hey, don’t worry about that, because the real attraction here is the artwork.

From the front cover all the way through, Shaw’s intricately composed, carefully realized, occasionally surreal illustrations are phenomenal, fluidly alternating between rather straightforward, strictly narrative sequences and much more figurative pieces, many of which also double as interactive puzzles, visual metaphors or cryptic clues. Or, at least it feels like that’s what they are.

In any case, with strong black lines and a generally earthy palette highly evocative of the tan, brown and gold tones found in several iterations of the game’s box art and board designs, Shaw’s audacious use of bold, saturated colors is well controlled and highly effective. I challenge you to find splotches and pools of blood that are rendered in such an artfully abstract style anywhere else. At least one of them looks calligraphic. Others seem to bend and wrap around the human form.

Incredibly, the script keeps pace, albeit on a completely different level. Unsurprisingly, perhaps, much of the text and dialogue center on fleshing out the game’s well known characters. In Shaw’s universe, however, their back stories and relationships are anything but predictable. It’s almost like an eccentric dungeon master decided to turn the basic board game into an ongoing campaign, complete with fully realized playable characters. Suddenly, these iconic but essentially two-dimensional characters spring to life, driven by rich and entrancing personal histories, goals and objectives. Even more impressive, Shaw completely reimagines the potential murder weapons, imbuing them each with a dark aura of mystery, malevolence and – according to one spicy colonel – motivation.

Until now, Clue was always about the characters first and foremost. After all, the whole point of the game is to figure out who committed this daring, essentially “closed door” murder. The room in which it was done and the weapon that was used always seemed like secondary concerns. The details of where and what always felt less important – and far less intriguing – than theatrically unmasking the mysterious villain.

Suddenly, in a completely unexpected, wildly imaginative move, the proverbial “closed door” has been ripped right off its hinges, opening up a new world of possibilities. In one fell swoop, Shaw unapologetically stands the Clue multiverse on it’s head, deviously recentering the story on a mysterious collection of objects with murderous intent.

Honestly, I haven’t the faintest idea where all of this is going, but with only three issues scheduled, this is a party you don’t want to miss.

Final Verdict: 9.3 This is no tepid reboot. In “Clue” Candlestick” #1, creator Dash Shaw literally rewrites the rules of a classic board game.