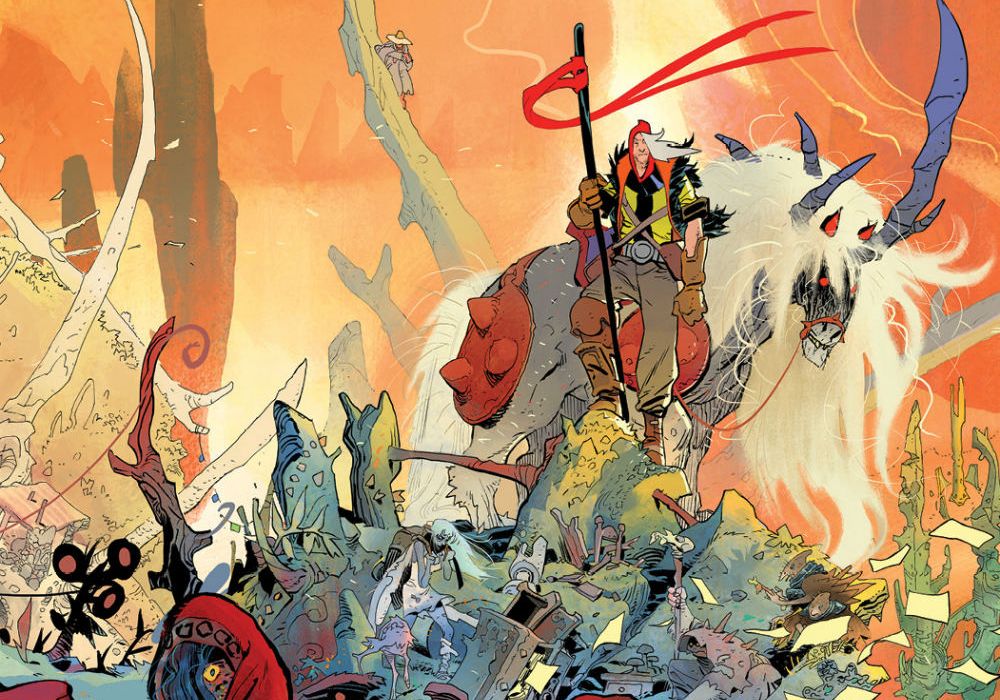 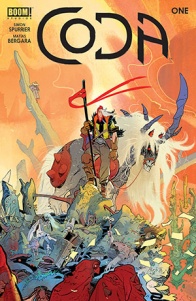 In the aftermath of an apocalypse which wiped out nearly all magic from a once-wondrous fantasy world, a former bard named Hum (a man of few words, so nicknamed because his standard reply is hmh) seeks a way to save the soul of his wife with nothing but a foul-tempered mutant unicorn and his wits to protect him…but is unwillingly drawn into a brutal power struggle which will decide forever who rules the Weird Wasteland.

Exposition be damned, “Coda” #1 gives us a talking dragon skeleton in the first splash page, and the dragon’s hilarious howls of lamentation are juxtaposed with narrative boxes, the transcription of a letter to our hero’s lover. Who is she? Where is she? What is the Quench? What happened to the dragons, and elves, and other magical beings in this world? Simon Spurrier uses the letter throughout the issue to fill in these broad-stroke expository details while the panels focus on the journey of the story’s protagonist, Hum, and his existence in this fantasy version of a post-apocalyptic landscape. Think of Hum as a sword-and-sorcery version of Mad Max. He’s a man who stands apart from the machinations of the powerful. He’s somewhat misanthropic and driven by his own agenda, riding astride a vicious pentacorn (a stand-in for Max’s muscle car). When beset by bandits, he’s a man of resources who is accustomed to violence when called for but would prefer to use his brain. Somewhere along the way, something cost him a leg. The pomp and politics of civilization are of little interest, unless they serve his own purpose, namely to find and rescue his love, Serka, the quest that will likely drive the series’s plot. Just don’t use the Q-word.

Spurrier’s script hurdles through 40+ jam-packed pages, revealing new ideas and twists with each page turn. The narration boxes are dripping with sadness and regret, and Hum’s confessional ruminations serve to add a deeper layer to the narrative. However, the highlight of the story is in the language that is both modern and arcane, creating a vocabulary and vernacular unique to this world. Colin Bell even employs a clever tactic in his lettering to delineate theatrical asides or parenthetical comments, making the character discourse a virtually aural experience. Readers should appreciate Spurrier’s effort, especially as the expertly-crafted and oftentimes acerbically deadpan dialogue allows for organic comic beats that meld perfectly with the whimsical and sometimes gruesome art.

And oh, this artwork! As great as Spurrier’s script is, Bergara’s linework elevates everything. The character designs, the architectural and natural setting details, the body language, the facial expressions, the page and panel designs, and the color choices are jaw-dropping, but the art really sings in the little idiosyncrasies. For example, Hum’s face is not your standard heroic visage. He has saddlebags under his eyes, deep and drowsy eyelids, hair that is punk on one side and metal on the other, a formidable Roman nose (good for detecting tranquilizers in wine, apparently), and thin lips that bear the distinction of opening only to reveal a grimace (he mumbles, after all).

The corpulent mermaid, Murkrone, is perhaps the highlight in a highlight-laden issue. Bathed in greens and oranges, you can almost sense her languid movements, draping her barnacled limbs over the edge her giant tub on wheels, dispassionately toying with Hum and dissecting his unspoken high stakes plot to bring himself closer to reuniting with Serka. It’s a great scene of brinksmanship that leads to Hum earning some cachet with his new employers. It’s a bonus that the panel and page compositions are so wildly inventive, and there is an elasticity in every figure rendering that gives the action more dynamism and the dramatic beats more darkly comic weight.

All in all “Coda” #1 is a more than promising premier issue. It’s colorful and comedic while also providing a pathos-infused journey for the hero that culminates in this issue with a plot complication that will reverberate over the subsequent installments. The balance of a tongue-in-cheek tone with the more dire elements of the book place this in an echelon apart from other entries into the genre. As masterful as Remender and Opeña’s “Seven to Eternity” and Liu and Takeda’s “Monstress” are, they are largely played straight, even as the latter provides some whimsical feline comic relief in its socially relevant narrative. “Coda” #1 succeeds in world-building equal to those recent fantasy paragons while adding a unique language and a quirky European and animation-inspired look that are refreshingly new. If this first issue is an indication of the storytelling prowess to come, I am already sad for the actual coda to this twelve-issue series.

Final verdict: 9.0 – Fantasy enthusiasts looking for a fresh take on an old genre will find “Coda” #1 a dazzling read, but the inventive premise, flawless narrative execution, and eye-popping visuals may even win over the most ardent fantasy-phobes.