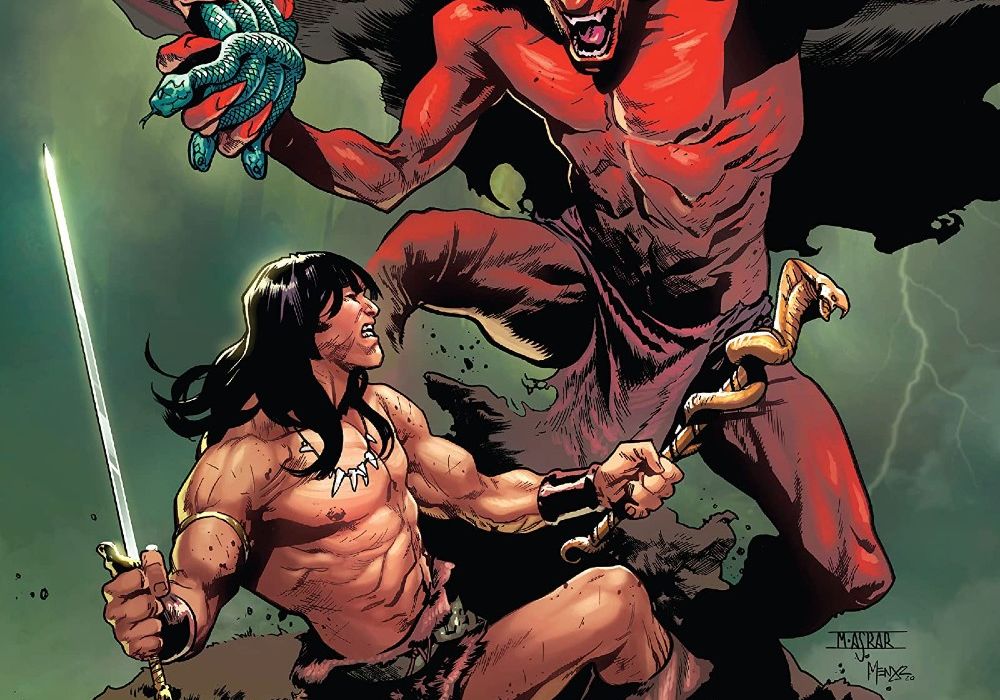 Ever since Conan was brought into the Marvel universe, he’s been making his mark among with the characters we know and love. In addition to “Savage Avengers,” he’s been undertaking a solo adventure in “Battle for the Serpent Crown” that has him cross paths with characters like Mephisto and Namor, so how does it end? Let’s take a look, with a few spoilers. 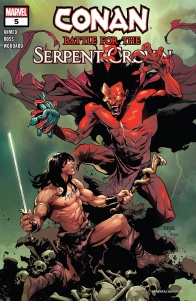 MEPHISTO TRIUMPHANT?! The trail leading to the SERPENT CROWN has brought MEPHISTO’s ultimate goal within reach! As CONAN makes his last-ditch effort to stake his claim on the treasure, NYLA SKIN makes a daring move! But will the Serpent Crown’s newly revealed secret doom Conan to a fate undreamed of?

“Battle for the Serpent Crown” has been a fun run up until this point, showcasing how Conan is a very muscular fish out of water in the modern Marvel universe while connecting him to other aspects of the comics. It comes to a close in issue 5, bringing us into the action with dire straits appropriate for a Conan comic.

Saladin Ahmed carries the story with a nice blend of narration and dialogue that’s consistent with the other “Conan the Barbarian” comics. Conan’s voice remains distinctive and clear, with a vernacular just different enough from the modern characters to make him feel unique and out of place from his world without losing coherence. Everything about him, from his outlook to his outfit, contribute to his place as an outsider in the modern world and creates a good contrast between his classic dark fantasy adventures and the blend of science fiction and mysticism that exist in the Marvel universe.

The use of the Serpent Crown and Scepter exemplify this blend. The Serpent Crown has been around in Marvel comics since the late 60’s, while the Serpent Scepter was recently introduced to create a link that ties them into Conan’s continuity.

“Battle for the Serpent Crown” provides a good blend of action, banter and wit. Imus Champion is a good foe for Conan; he’s his match physically, in addition to having the resources to make him a threat in multiple ways. With the addition of the Serpent Crown and Serpent Scepter, he also has magical powers that make him a proper threat in every way.

As a result, we get to see Conan fight using more than just brute force (although he does use plenty of that). He has to take advantage of Champion’s weakness and outwit him as much as he must best him physically. It shows more layers to the barbarian than the average reader might assign to him, and makes for a more satisfying victory than just another stab.

At the same time, this gives us Conan’s first meeting with Mephisto. Mephisto has made more than a few deals with members of the Marvel universe, so is it Conan’s turn? The scene is well delivered, using nice character placement that brings us around the scene as though Mephisto were circling Conan and drawing closer as he makes his pitch. Mephisto’s temptation is well-delivered, especially with the lettering from VC’s Travis Lanham, which accents it with red coloration and slightly twisted letters to show the power of his words. At the same time, Conan’s response is both in-character and shows the strength of his will.

It’s a good moment that pauses the combat just long enough to give us a breather before pulling us back in, leading up to a satisfying end to the conflict.

Now let’s talk about the art. “Battle for the Crown” has Luke Ross as the artist, accompanied by color work from Nolan Woodard. Ross’s illustrations work excellently for a “Conan” comic, bringing the barbarian to life with a nice amount of detail. His muscles bulge and his body is scarred, with just enough shading lines to accentuate everything.

One moment of note is a noticeable shift in style as Conan wakes from his dream of times past. It’s a subtle change, but the shading, coloration, and detailing change as Conan wakes up. Doing so helps establish the difference between Conan’s era and the one he’s in now in an unspoken but effective manner.

When the action kicks off, Luke Ross keeps everything flowing nicely. The angle of the characters adds to the fluidity of the fight, and the framing of each panel helps draw the eye to the key features of the scene. Each miss feels like a frustrating whiff, and each blow has sufficient impact to show off the characters’ strength.

As previously mentioned, the moment where Mephisto tempts Conan also makes great use of character placement and shading, backed up by Nolan Woodard’s uses of red.

When the comic ends, it ends as most “Conan” stories do. The barbarian might not have gained much, but it’s enough to celebrate with good company and good drink. This creates a nice parallel with the beginning of the issue, where he dreamed of a similar celebration back in Hyboria. This helps establish that Conan is not as out of place as he once felt, and connects him back to his roots in an organic manner, bringing the comic to a satisfying conclusion.

All in all, “Conan: Battle for the Serpent Crown” has been a fun ride that introduced Conan to a few different aspects of the Marvel universe. Issue 5 brings it all to a good close, with enjoyable storytelling, artwork, and character work.

Final Verdict: 8.5 – An action-filled, well-written, and wonderfully drawn story that brings the “Battle for the Serpent Crown” story to a nice end.