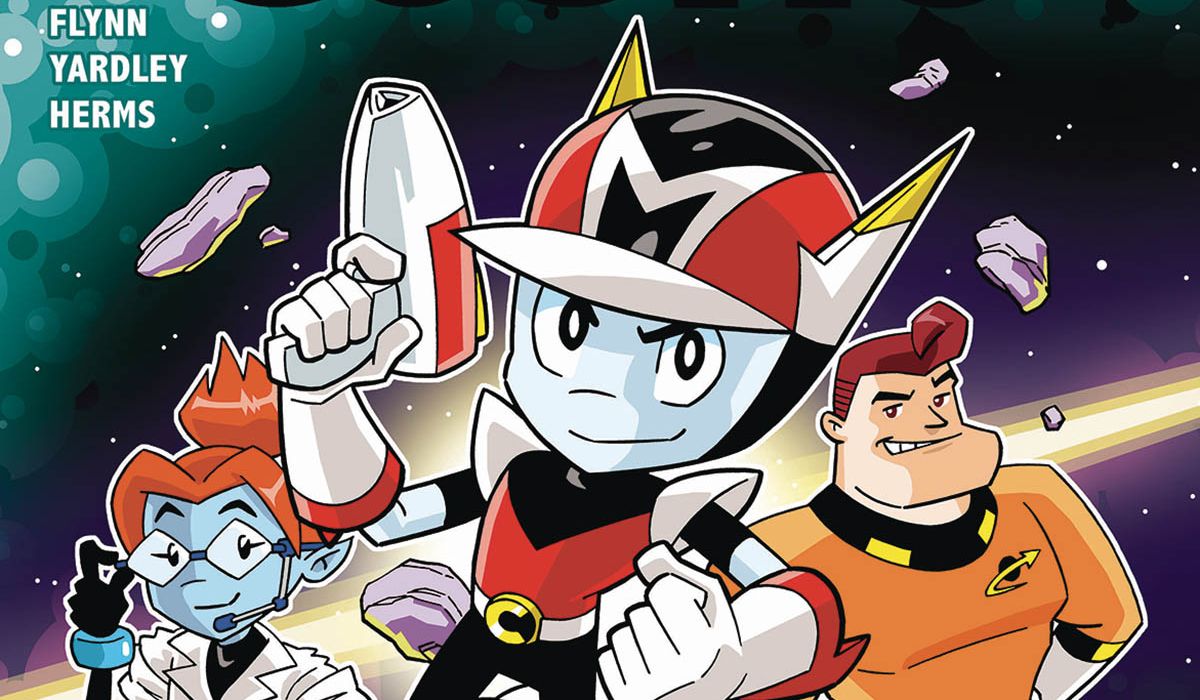 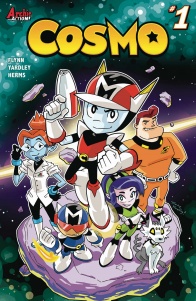 NEW ONGOING SERIES! “Space Aces” – Part One: Cosmo is a Martian with the skills of a warrior and a heart of gold. He’s the leader of his M.A.R.S. unit that explores the solar system. What was meant to be a routine scouting mission turns into a much larger adventure Cosmo and his friends stumble upon a panicked human and encounter some ferocious foes!

While the market for children’s graphic novels has exploded in recent years, serialized monthly floppies primarily continue to cater to teen and adult consumers. Certainly, there are many great monthly titles that crossover and appeal to a huge demographic, including tween and middle grades readers, but true all-ages books tend to remain pretty sparse. In other words, after six long decades of absence, the timing is right for a reboot of the infamous spacefaring saga written exclusively for children, “Cosmo” (originally entitled “Cosmo the Merry Martian”).

Honestly, I’d never heard of Cosmo before, either the character or the series, which comes as no surprise since it originally only ran for a total of six issues from late 1958 to early 1959 to capitalize on the excitement of the infamous U.S.-Soviet Space Race. In any case, sixty years after the inauspicious debut of this obscure Archie Comics franchise, Cosmo and his cohorts are back, confidently reimagined the creative team of writer Ian Flynn, illustrator Tracy Yardley, and colorist Matt Herms (all of whom previously worked on “Sonic the Hedgehog” for Archie).

Unsurprisingly, with his big, round helmeted head, petite body, gloved hands, and massively oversized boots, Cosmo himself bears more than a passing resemblance to the iconic character Sonic. Aesthetically, Cosmo and his crew of interstellar scamps could all be part of the Sonic universe, perpetually ready to power-up and go on an instant speed run. Clearly, illustrator Tracy Yardley is both enamored and comfortable with the contemporary manga/anime visual lexicon, making the illustrations immediately accessible, if somewhat derivative, to anyone familiar with other works in those wildly popular genres.

Narratively, the story also walks a fine line between cleverly referencing other well-known tropes and feeling a tad unoriginal. For example, the story kicks off with a braggadocious interplanetary explorer (Max Strongjaw) recording an entry in his daily mission log, his account overflowing with ego and bombast. Moments later, however, encountering the unexpected, he shrieks and immediately flees, only to regain his bravado once he feels safe again. Naturally, this pattern continues throughout the rest of the issue, to generally amusing effect. Captain Strongjaw bursts with pride and puffery when he feels safe and secure, only to cower and hide the minute he feels threatened in the least. It’s a pretty well worn schtick, from the Cowardly Lion to Buzz Lightyear, but should get some reliable laughs from as yet unjaded kids.

Similarly, the notion that Cosmo and his Martian crew are more technologically advanced than their earthling counterpart isn’t exactly a new idea, but writer Ian Flynn nonetheless mines the subject for plenty of laughs. After the egotistical, anthrocentric Captain Strongjaw marvels that it took “years of ingenuity, bravery and raw grit” for humans to set foot on the moon, the Martian scientist Medulla responds, “It really is quite the achievement…. What with your primitive combustion rockets and lack of artificial gravity, it’s a miracle you made it off the ground.” Then, she goes on to tell the incredulous commander of the Martian-made wonder that the earthlings still haven’t seen, hidden on the moon’s dark side.

Generally, there’s a lot of dialogue and not a ton of action, but as an introductory issue it sets the tone quite nicely for the rest of the series. We get an excellent sense of each of the character types that make up the Martian crew and how they can be seen to contrast with the simultaneously overconfident yet panicky earthling. The titular main character, Cosmo, is fun-loving and likable – and an excellent guide for young readers as he literally and figuratively gives us the full tour, not only helping us to get our bearings, but understand the world of the story, too. The pace is efficient, the paneling simple and intuitive and the character expressions bold and unambiguous.

As the solicitation suggests, this is barely the beginning of a much bigger adventure. Who knows where these characters will ultimately end up and what they will do when they get there. The first issues ends on an interesting cliffhanger, but at the same time, the series already has the feeling of something more episodic than truly serialized. I’m not entirely sure you won’t be able to pick up “Cosmo” anytime and enjoy the ride, especially as a way to share your love of comics with younger readers in your life.