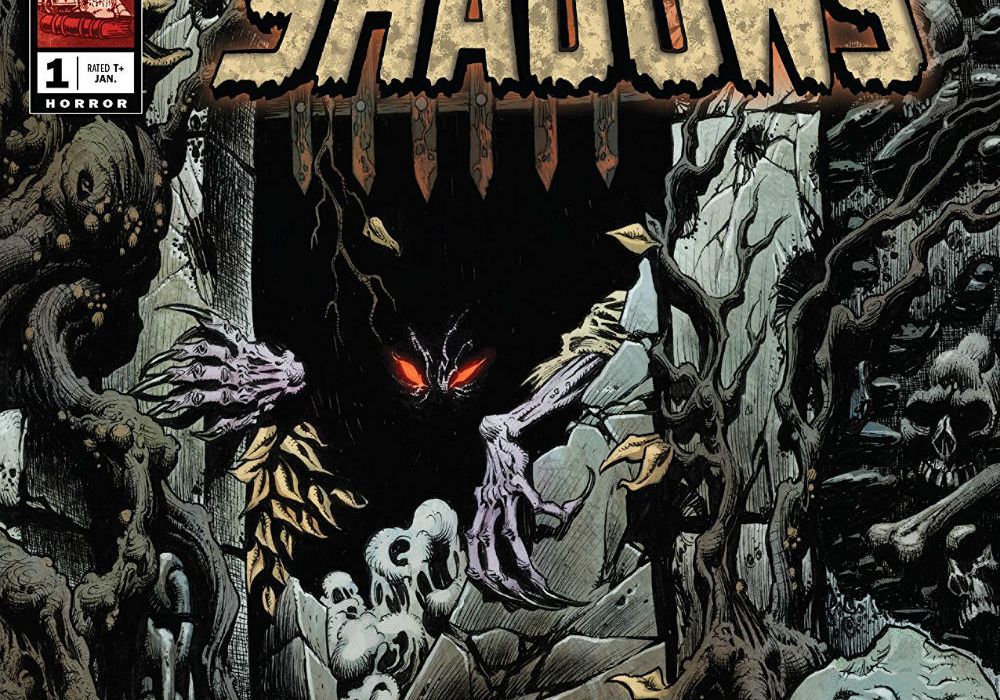 Open your ears, dear reader, what do you hear? The creaking of the gates as you sit alone in the mausoleum. The scraping of metal and stone coming from the corner, the shuffling of feet, the drip, drip, drip of blood coming from the walls. Do you dare approach or are you all too aware of what nameless evil lurks in the “Crypt of Shadows?” 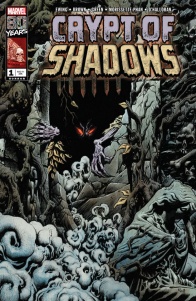 For Marvel’s 80th Anniversary we’ve gone into the vaults to bring back some classic titles from the Marvel of yesteryear…but maybe some vaults should stay closed! Something terrifying has broken free and crawled forth from one of the most terrifying corners of Marvel-dom, the CRYPT OF SHADOWS! Prepare for terror! The shadows are deeper than you think, and horrors lurk within…

Back when Marvel Legacy kicked off, the house of ideas brought us a series of one-shots exploring a few of their cancelled series. Now, that project returns for Marvel’s 80th anniversary, with “Crypt of Shadows” being the first (alongside “War is Hell.”) Traditionally an anthology, the creative team plays with the format, giving the one-shot a modern flair that is the perfect marriage of homage and update.

There are three stories in “Crypt of Shadows” #1: the framing device and the two self-contained narratives told through the frame’s narrator, all of which have one thing in common, that of dogs and the narrator’s fear of them. The choice to have one of the stories be the framing device is nothing new to horror tales but the way they present it, and the way they tie the three together, is what makes this one-shot work so well.

‘Cynophobia’ isn’t just there to be a host, telling unrelated tales meant to spook, it’s there to tell its own narrative and to use the other two insert tales to further develop and support it It’s made clear by the end of the first story that Radley is a very unreliable narrator and, as such, we are primed to be skeptical of the truth contained in his second story, one that is ostensibly about him. We begin to re-frame the frame in our minds, to become skeptical and to wonder what else is going on with Mr. Radley.

It feels like a coherent whole, complete with a stealth commentary on the ways in which the stories in the past were told. Without ever being pretentious or overly judgmental, Ewing points out the ludicrousness of these old EC-style stories via Mr. Radley’s psychiatrist’s questioning of the validity of the tales he’s telling. Just look at the way Mr. Radley changes the way he speaks between the casual scenes and the more purple prose of ‘Grave Errors’ or ‘A Moment of Madness.’

Additionally, Ewing understands that these were cautionary tales, meant to show terrible people getting their comeuppance. He leans into that, allowing for a pure enjoyment of the horror, and comedy, contained within. There isn’t a lot of comedy but there are enough small moments, such as the wedding night panel from ‘A Moment of Madness’ or the way the police approach John Something once his debts have to be paid in ‘Grave Errors.’

As for the horror, Brown, Green, and Morissette-Pham bring out their unique stylings to tailor each story to the right mood. Brown on ‘Cynophobia’ is menacing, his characters grimy and covered in darkness. The dogs in particular are unsettling, with vein-like inking around their pupil-less eyes and permanent snarls on their faces. That first page perfectly sets the mood of the issue, introducing the central theme while providing a striking image to draw the reader in.

Green’s work on ‘Grave Errors’ is shinier than Brown’s, creating the mood for a simpler story, one that’s lit by the moonlight, with a focus on environment more than character. This creates an atmosphere of dread surrounding John Something so that when the inevitable twist of fate occurs, it doesn’t take much for the horror of the situation to sink in.

Morissette-Pham on ‘A Moment of Madness’ is the cleanest of the bunch as it is set in affluent spaces and is used to perfectly highlight and contrast the narration. Characters are kept at a distance, their expressions muted but visible, which in other stories might be a detriment but here, utilizing the narrative trapping of the genre — thought balloon, effusive narration — the distance works to heighten the tension and continues to evoke the way these stories used to be drawn. Additionally, his thick inking and borders gives definition to the characters, the art lending itself well to shadows and the more striking moments.

None of this would work, however, without O’Halloran’s coloring; it really makes the comic pop and the horror land all the harder. Each story has a different style, in tune with the other artists’ linework. ‘Cynophobia’ has a darker, rougher palette, the colors mostly washed out, save for the rusty reds of the dogs & the blood. ‘Grave Errors’ leans heavily on bright blues and greens, lit by the bright moon, again using harsh reds and bright yellows sparingly for contrast. ‘A Moment of Madness’ takes broad swaths of colors, with little blending, to highlight the rich trappings of the story, bringing in, once again, the dark, rusty reds to provide contrast for the ending twists.

I would also be remiss if I didn’t mention Laham’s lettering and balloons. It’s a challenge to fit as much text as there is in this comic and not overwhelm the audience but he pulls it off. The narration boxes are kept slim but unsettling, with jagged edges, while the thought balloons are more free-form, as if they were shakily drawn instead of cleaning circled. The highlight of his lettering has to be the way he draws cries of horror. It’s never overwhelming, restrained enough that the intent is clear through the slanted, distorted letters, but without reveling in what those letters mean.

The only complaint I have is that the wrap up at the end doesn’t cohere as much as it wants to. The nature of “Crypt of Shadows” #1 means that teasing out the pertinent information, what is true and what is not, is difficult on a first pass, so that the ending, which satisfying, can leave you scratching your head at the specifics. But these kinds of stories never were meant to be scrutinized that deeply so, in trying to keep to the format, Ewing sacrificed some clarity. Clarity which can be gleaned from the marvelously crafted whole but a clarity that is missing nonetheless.

“Crypt of Shadows” #1’s success should come as no surprise to those reading Ewing’s “Immortal Hulk.” Were this not explicitly a one-shot, I’d be waiting with bated breath to see what other nameless evils lurk deep within the “Crypt of Shadows.”

Final Score: 9.0 – Homage and update, “Crypt of Shadows” #1 shows how to do anthology horror right and how to properly honor the property for Marvel’s 80th.