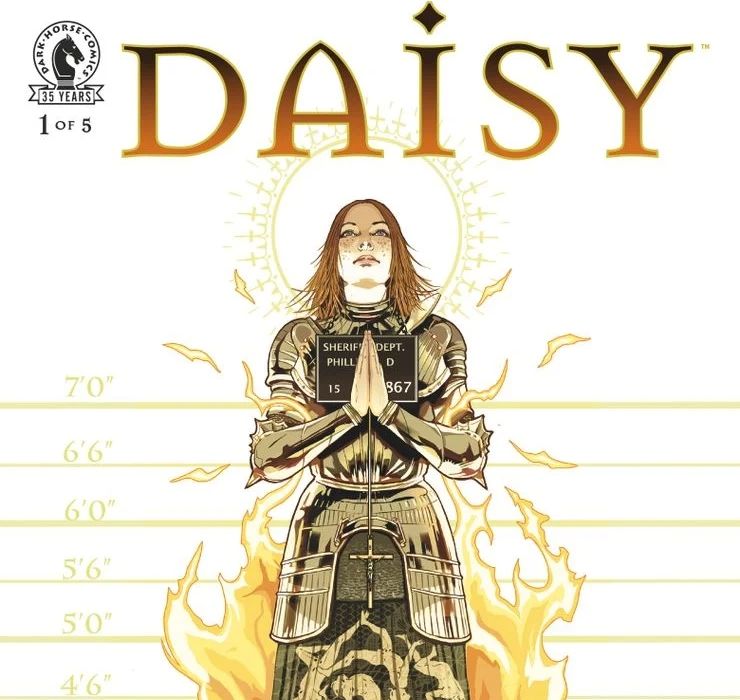 With allusions to the Old Testament and talk of a missing child, a persistent sense of foreboding hangs over “Daisy” #1 leaving us to ponder who’s side we want to be on. (Warning: may contain minor spoilers.) 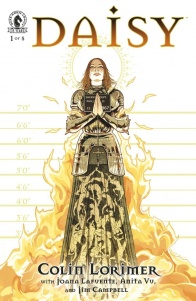 A desperate mother’s five-year search for her missing son leads her to the small town of Brimount and to the mysterious Phillips family. Daisy Phillips, like many teenagers, has a hard time fitting in, but not for the usual reasons. Daisy stands eight-and-a-half feet tall and is still growing, but her troubles with ill health, daily ridicule, and custom-made clothing are only the tip of the iceberg. Daisy may well be descended from a race of cannibalistic giants spawned from the outcasts of Heaven!

It’s not possible to recreate a bona fide jump scare in comics. A startling page-turn comes close, but there’s no lingering camera shot and excruciating silence to set things up. Even the most well executed page turn can’t give us the same cathartic release we feel in film. “Daisy” #1 isn’t structured to rely jump scares. Nevertheless it delivers one of the more surprising – and deeply disturbing – panels you’ll see all year. With perfect timing and outstanding work from the entire creative team, its harrowing message is clear: you shouldn’t have come here.

Having well established this disconcerting dynamic from the outset, writer/illustrator Colin Lorimer begins adding layers of subtext and meaning to the actual story. He builds the core narrative around various passages from an unspecified Judeo-Christian text, possibly the “Book of Enoch.” Either way, it’s more than a bit disconcerting when a boy named Simon dutifully reads from the sacred text to a small group of children.

Visually, the scene has creepy Pied Piper vibe. The titular character, Daisy, is the ringleader, of course. Further fueling the tension, we don’t see any adults interact with the children until a man referred to simply as Father gets home. Here, we can’t help but think of an earlier rhetorical question that still lingers. “We all know Father likes a house swept and kept in order, don’t we?” I have to believe the price for not doing Father’s bidding isn’t a mere timeout followed by milk and cookies. It’s still too early to tell, but Father seems to have the kind of unnervingly calm demeanor that can mask a volcanic anger within.

From the first page to the last, Lorimer’s rock solid script deftly maintains a persistent sense of dread and foreboding that slowly, but continually rises. His eye for visual detail reinforces his carefully crafted script, subtly underscoring the reader’s growing sense of unease. Dead birds and mice on the floor, Daisy’s visually impenetrable eyeglasses, her vaguely Steam Punk leg braces, and an empty tire swing that bears more than a passing resemblance to a noose all further remind us something here isn’t right. Whether it’s a problem of truly Biblical proportions or creepy, fucked-up behavior that stems from some weird, cult-like beliefs is yet to be determined. Either way, it’s not good.

Unfortunately, though Lorimer’s script and illustrations work well together, the coloring isn’t always in sync with everything else. Overall the issue looks great. Lorimer’s compositions, pace and paneling feel spot-on, especially on two key reveals. First, the two-page spread that finally shows us Daisy’s majestic, towering height is appropriately clever and captivating. Later, Lorimer hits us with a gruesome two-page sequence that combines great character design with highly dramatic, blood-and-guts action – a harbinger of things to come.

For the most part, Lorimer’s realistic style is bolstered by Joanna Lafuente and Anita Vu’s somewhat grungy, desaturated colors. Their work on the flashback/scripture scenes, by contrast, feels like a lost opportunity. In a pivotal choice that greatly impacts the whole book, the flashback scenes are colored with an overly deep, monochromatic blue wash. With some truly grotesque details on several of these pages, it would have been great to see a few well chosen splashes of complimentary reds, oranges and yellows. An extreme close-up of grotesque, blood spattered teeth definitely seems to warrant some accent colors. Even more so, with such an extremely limited palette, the image of Brother Azazel’s imprisonment “deep in the belly of the earth” looks muddy and dense. Lorimer’s kinetic lines provide plenty of stylish detail, but they’re lost beneath a heavy wash of homogenizing color.

Slasher films often rely on a structure that keeps the audience guessing which character might survive. Even as the bodies pile up, there’s still a sense that at least one character will live to see the denouement. Whether it’s through luck, perseverance or strategy, someone’s life will go on. It’s that undying optimism that makes us scream at the movie screen, “No! Don’t go in there!” Who knows? By the end of the series this may become exactly that kind of story. To this point, however, it’s not at all clear who that protagonist might be, much less what they need to survive.

Final Verdict: 8.2 “Daisy” #1 is built around a mysterious, rock solid script. Some of the artwork isn’t in sync.