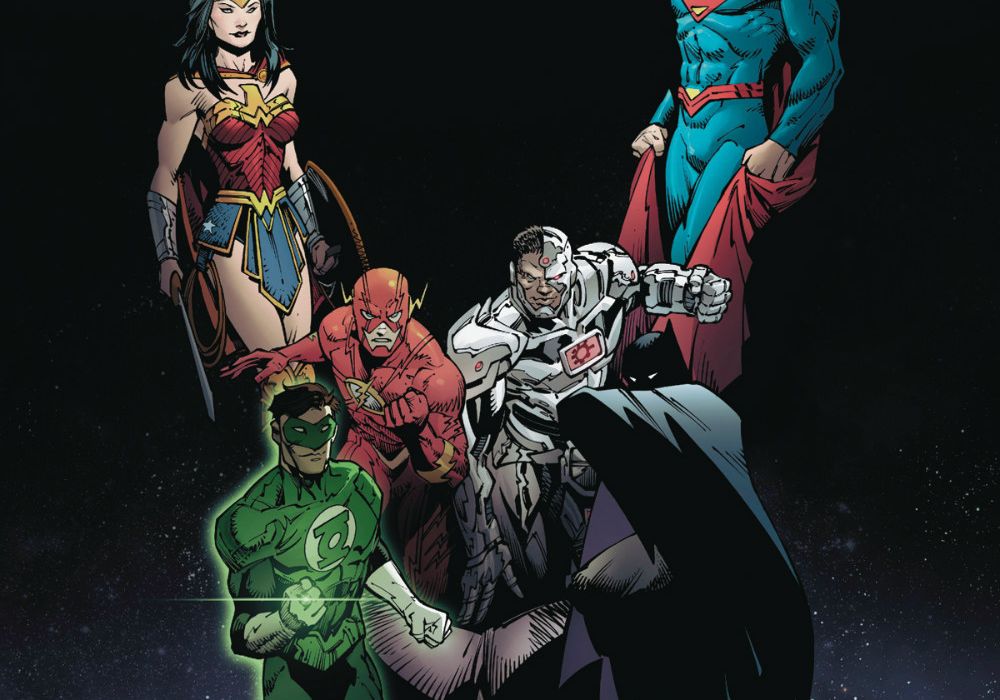 Scott Snyder has an idea. An idea he’s been building up to for a long time. To make it work, he must draw upon the history of Batman, Hawkman and Hawkgirl, the DC multiverse, and more comics that would bring this blurb into spoiler territory. So without further ado, let’s take a look at “Dark Night: Metal,” which may include a spoiler or two. 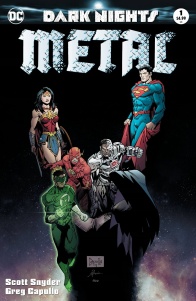 The superstar BATMAN team of writer Scott Snyder and artist Greg Capullo reunite for a massive, universe-spanning event!
DARK DAYS: THE FORGE and THE CASTING hinted at dark corners of reality that have never been seen till now! Now, as DARK NIGHTS: METAL begins, the Dark Multiverse is revealed in all its devastating danger—and the threats it contains are coming for the DC Universe!

DARK NIGHTS: METAL is a DC event unlike any other—one that will push Batman, Superman and heroes of the Justice League beyond their limits to take on threats unlike any our world has ever seen! It will take the combined might of the World’s Greatest Heroes as you’ve never seen them before to face what’s coming their way!

“Dark Nights: Metal” certainly knows how to kick things off. After a quick one-page setup about the mythos behind this story, we’re tossed right into Warworld as the Justice League is forced to fight in a gladiatorial arena for Mongul’s entertainment. Their powers are sealed, and they’re up against giant robots designed specifically to counter them, by a Toyman under duress.

Sure, it may not seem directly related to the plot, but it’s still pretty awesome. It gets even more awesome when the Justice League pilots the robots and they combine into one massive Justice League mecha; think of the DC equivalent of Voltron or the Megazord, and you’ll have the general idea.

Now that is how you start a comic! It has high stakes, the heroes are in a pinch, and the result is both awesome and satisfying. It’s a great way to draw readers in, and is just over-the-top enough to be really fun to read.

The action-packed entry features some excellent artwork, compliments of Greg Capullo, Jonathan Glapion, and FCO Plascencia. The battle is intense, each panel packed with dynamic energy. It builds on the tension, before culminating in a beautiful full page of the Justice League mech, which wonderfully integrates the different aspects of the individual robots – and the heroes they represent – together.

The comic makes an abrupt shift after that, though, as “Dark Night: Metal” returns to the story. (That said, I will be disappointed if we never get to see the giant robot again.) But the plot kicks off pretty immediately, with Gotham suffering from a freak energy storm and the sudden appearance of a mountain that came out of nowhere.

Gotham really just can’t get a break, can it? But even this splash-page is filled with wonderful imagery, with the dark skies crackling with purple energy, and the wreckage beneath it. It’s ominous, and the sense of disaster can be felt through the imagery the art team creates.

Scott Snyder moves the story quickly from point to point, as the League investigates onwards. Each answer he provides leads to more questions, but it moves quickly enough that it doesn’t feel bogged down by them. The story flows well enough, maintaining cohesion even as it jumps ahead through the events. As it builds on the mystery, it draws readers in, tantalizing us with the buildup to the revelation. It’s a properly executed buildup, with a satisfying payoff.

There is a fair amount of exposition provided in this issue of “Dark Night: Metal,” but it’s backed up by more of Greg Capello’s artwork. So much backstory can be provided through just a bit of brief dialogue and a matching image, although some of it may require a more in-depth amount of knowledge about the DC universe than a casual reader may be familiar with. But every panel tells a story, packed with enough recognizable characters and detail that readers can put the pieces together; it’s a fine example of storytelling through a combination of dialogue and artwork, and it works quite well.

It’s clear that much of this is meant as a love letter to the history of DC and many characters that have been under-utilized as of late. Along with the aforementioned Toyman, we get reintroduced to the Blackhawks, Red Tornado, and see glimpses of many more characters from throughout DC’s history. Longtime fans will be happy to see some old favorites brought back in to the events, and how they’re tied into the storyline.

This is, of course, an event comic, and the story begins to dive deep into the Multiverse, all 52 of its universes, and what’s beyond them. With three words, Snyder adds a new layer to the expansive multiverse of the DC line, introducing new and dangerous possibilities.

And somehow, this all connects to Nth Metal and Batman. If the infodump starts to sound ridiculous, Scott Snyder isn’t above calling himself out. As Superman himself points out, the plot involves “a being old as the universe [who] has been targeting Batman for thousands of years from a Dark Multiverse.” It does sound pretty weird when you put it like that, but it’s handled in such a way that it all feels as big an event as Snyder is intending it to be.

Of course, that’s as long as you’re willing to suspend your disbelief to the degree that the comic requires. There’s always a risk of breaking that disbelief when writers try adding supernatural or paranormal elements to Batman’s story; after all, one of Batman’s most important traits is that he is only human, albeit a human at peak physical condition and with a brilliant mind. There’s always some level of backlash when writers try to include some sort of otherworldly force behind his abilities or history, and it seems like “Dark Night: Metal” is attempting to do just that, adding an eldritch connection to the entire Wayne line.

In doing so, it may weaken what Batman is supposed to represent. Can he really represent what a human with no powers can still do and become if there’s an outside, supernatural force guiding him? At only one issue, it may be too soon to judge the comic for what it’s trying to do with the bat-mythos, but these are concerns it brings to mind.

Throughout the comic, we get glimpses of various characters of immense power, and foreshadows of things to come (almost literally, since the images are covered in shadows and darkness). They appropriately add to the overall weight “Dark Night: Metal” carries, and once more the artwork does a fine job adding to the tone and mood.

However, while we’ve seen characters like Doctor Fate before, the biggest twist comes from the appearance of Dream of the Endless, from Neil Gaiman’s “Sandman.” While the series is part of the DC Universe, and characters from it have occasionally played a role (such as Lex Luthor meeting Death herself several years back), it’s always a moment of major importance when these characters are brought in. The moment is given all the gravitas it deserves, striking a powerful note to end the comic on. The art team’s work serves the character well, bringing just enough detail to the patterns of his outfit and the otherworldly feel of the character.

Throughout the comic, everything looks fantastic. There’s great detail put into every character design and image, from the giant robots to the pink velociraptor on Blackhawk Island. (Or perhaps it’s meant to be a pink deinonychus; either way, it has feathers.) The characters all look rather nice, with a proper amount of detailing to each expression and action shot that the scenes are enhanced without getting bogged down.

Outside of the character designs and action, the scenery also looks very nice. From the lush jungle scenes of Blackhawk Island to the dark interior of Wayne Manor, the lighting and designs properly enhance the scene and tone, creating just the right mood for each moment. Each page is filled with detail and a fine use of light or darkness to really set the stage, and it pays off well. When we shift from the bright jungle scenes to the shadows of the Batcave, the shift in location instantly changes the tone and mood, enhancing the ominous effect and the dread at what’s to come. It’s a marvelous example of how art can affect the core emotional power of a comic.

“Dark Nights: Metal” is the start of what promises to be a major event in DC. The checklist at the end includes a long list of tie-ins and related comics, so keeping up with the entire story will not be easy on the wallet. But if the story is as good as this first issue is setting it up to be, it may be worth the investment.

Overall, “Dark Nights: Metal” is an issue that’s heavy on the backstory and exposition, but provides some very awesome moments to go along with it. It’s well-paced, and offers some great artwork, while properly setting up a massive DC event. There’s a lot to keep up with, and you won’t want to miss a thing.

Final Verdict: 7.3 – A solid start, providing us with a strong introduction and plenty of plot to start with. This could be the start of a great event comic.