Journey into Izalith and elsewhere with “Dark Souls: The Age of Fire” #2, courtesy of a great writer and beautiful artwork. 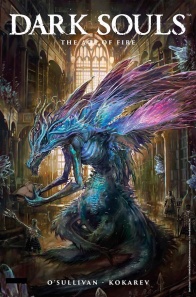 Direct tie-in to Dark Souls One, debuting on Nintendo Switch and being rereleased on PS4, Xbox One and PC in 2018! Written by superstar writer Ryan O’Sullivan! Return to the very beginning of the Dark Souls story with a dramatic retelling of the legends of Gwyn – Lord of Cinder and Knight Artorias!

If there’s one thing Ryan O’Sullivan excels at with video game tie-in comics especially, it is his intense attention to the source lore. “Dark Souls: The Age of Fire” #2 is no exception. Although he does not have as much of the history of the First Flame and the Lord Souls to delve into this time, O’Sullivan nonetheless pays a lot of attention to how the world may have been back in the better times of the reign of Gwyn. As with the previous issue, he includes a dramatis personae section at the start of the issue, giving the most basic information on each of the characters to appear in the issue itself so that readers can be prepared for the identities of those to come, whether or not they are fans of the FromSoftware video game franchise.

Although the game-based characters such as Seathe the Scaleless and Knight Artorias have only the briefest of appearances, O’Sullivan stays true to their most famous characterizations, from the Paledrake’s single-minded obsession with mad, sorcerous experimentation to the Abysswalker’s aloof, wordless mastery of combat that inspires those around him. Famous groups are no less important to get right, and the continued analysis that O’Sullivan gives for the Silver Knights is thoroughly engrossing, telling a tale that players would be familiar with, but in a different context. Although the presentation of a Dragon Knight from Drangleic (the land of the second game rather than the first) is somewhat odd, there is not a wide enough discussion of the Dragon Knights to say that they are identified poorly.

Taking him away from the king, O’Sullivan shows far less of protagonist Silver Knight Arkon’s uncertainty. Instead, without others calling him “Dragonkiller” and accidentally making him very uncomfortable, he reverts to the stoic warrior façade that seems to be common of the Silver Knights. After an important event later into the issue, he even seems to be in favor of using unnecessary violence to take out his rage, showing that there are not many “good” people in Lordran, even amongst the sworn soldiers of the Lord of Sunlight himself.

The sleazy Channeler Liste is shown through a different lens as well, with the personality he demonstrates in front of his liege, Duke Seathe the Scaleless himself. Though Liste is not presented in a positive light, O’Sullivan takes the opportunity to show that as bad as Liste is with his presumed excesses as a “Snatcher,” he is still attempting to keep competent and safe, giving him even the slightest bit of a positive personality. Will this lead to him coming into more direct conflict with the Gwyn-sent party of adventurers? Only time will tell, but he’s more likely to do so than the Duke.

A sizable amount of comedy comes in when O’Sullivan makes use of some of the secondary original characters, namely Dragon Knight Gravis and Executioner Wurdow. They function as the stereotypical “exasperated smarter person with less intelligent reckless person” duo, despite being from two completely different organizations. O’Sullivan writes them out almost as though they were a comedy sketch, with Wurdow not understanding basic comparison points and Gravis being constantly annoyed with the Executioner’s bullheadedness. Their partnership is not without gravitas, considering the state of Izalith, birthplace of demons, but the relative humor does help lighten things somewhat.

Anton Kokarev performs double duty on illustration and coloring, with the overall feeling being akin to a Renaissance era painting, or even a computer generated image based opening video in the Dark Souls games themselves. The linework is photorealistic, down to individual specs of dirt on a skull or a defined gleam to a person’s armor. The glow of a demonic eye is similar to what one would see in a film, wrapped in darkness and surrounded by a blur of fur as the demon runs. Perspective changes work marvelously, from wide angles of entire groups to close-ups of faces; from straight views across a battlefield to an over-the-shoulder viewpoint for a potential killing stroke to a worm’s eye view of a similar situation from the perspective of the victim. Together with the photorealism and general blurred imagery on somewhat out-of-focus faces at times, the entire thing sometimes feels as though it were in a dream.

Kokarev’s colors are nothing to sneeze at either. Depending on the scenery, he uses a selection of palettes. In Izalith, corrupted by the Flame of Chaos, he utilizes deep browns and yellows to give an impression of ashes, making a striking difference against the dark red of blood spurting from wounds. A bright orange-yellow of a flaming torch casts a shocking contrast to the surroundings as well, and the hellfire of the aforementioned Flame of Chaos bathes the entire area in that color scheme before shifting to a general appearance of long-cooled ashes. The Duke’s Archives have an ethereal bright blue and purple coloration to them in contrast to the hellish landscapes of Izalith, demonstrating his detachment from others, and the party going to New Londo have a mixture of a brightly lit outdoor area and a very dark, heavily shadowed darker blue with black and other dark shades to showcase the deepness of the darkness around the area of the Four Kings and, potentially, their connections to the Abyss.

In all, this creative team is doing a wonderful job, and leaves a lot to look forward to in the coming issues, regardless of whether you are originally a fan of the franchise or not.

Final Verdict: 8.0– Less heavy on lore, but well-written with humor and danger both, the artwork again steals the show when it comes to this “Dark Souls” comic series.