While a sad end to an arc, typical of Soule’s Vader, part four of ‘The Dying Light Part’ offers strong character moments and internal conflict. 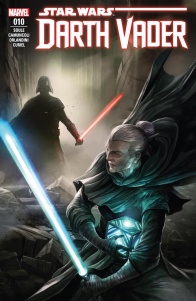 Vader’s showdown with Jocasta Nu comes to a startling conclusion!

What secret information has the Jedi librarian risked her life to protect?

And can she stop Vader from getting it?

With the more or less foregone conclusion of the events at the Jedi Temple, especially in the wake of Order 66, the challenge of “Darth Vader” #10 comes from how to deal with the established canon in such a way that none of the characters feel cheapened, while also giving some actual meaning to their struggles. Charles Soule rises to the occasion, with very high level characterization for each of the major factions in the plot.

While Darth Vader himself has only very limited dialogue, his actions say what his face obviously cannot. During his  encounter with Master Nu, he follows Darth Sidious’s orders to bring her in unharmed, only ever acting in defense. The reluctance to kill her even goes further, toward respect. Despite everything, Soule draws attention to the small piece of Anakin Skywalker in how he continues to call the chief librarian “Master Nu,” in contrast to how he did not acknowledge the previous Jedi Master he faced by name, let alone any use of an honorific. However, just because he has more respect for Master Nu does not mean he is shown as any less brutal, as demonstrated by his treatment of his confused, misguided clone troopers. Most telling is how Soule shows Vader taking the news by Master Nu about Sidious’s likely plan: rather than dismiss her opinion as the lies of the Jedi Order outright, as he would have in the beginnings of his time as Darth Vader before the armor, our villainous protagonist instead actually seems to value her comments even above his “friend” and master, newly proclaimed Emperor Palpatine.

As there is a lot of wiggle room to work with, Soule continues to show why Jocasta Nu is both a Jedi Master and the chief librarian of the Order. Despite being greatly outnumbered, she is able to at least moderately fight off her pursuers, though the reality of how outmatched she is takes hold regardless. Her real skill, rather than her martial prowess, seems to be her keen intellect and ability to get her own point across. Aside from the aforementioned discussion with Darth Vader, Soule also demonstrates her capability to turn the clones against their leader without any use of the Force whatsoever.

The clone troopers themselves are treated rather sympathetically, despite being the agents of the rising Galactic Empire. Soule draws attention to the fact that the common trooper has no idea about Darth Vader, or his past as a Jedi Knight, and that many troopers do not even know anything about his appearance, in armor or out. The way in which Vader is seen treating the clones, by restraining himself from using lethal force on those who do not know better or doing so on those who could become a threat quickly, helps humanize them in a way that having the masses simply die to Jocasta Nu’s lightsaber and powers from the Force would have relegated to even more insignificant cannon fodder. In particular, Soule allows readers to feel for one trooper, the commander CC-1010, a.k.a. “Fox” from the Star Wars: The Clone Wars series, despite his part in such a villainous scheme due to the circumstances surrounding his role in the endgame of the hunt for Master Nu.

Though Soule’s writing seems to be the highlight of the issue, Giuseppe Camuncoli’s artistry cannot go unappreciated. The very few organic faces in the issue all are given intense detail, with age lines being prominent to showcase their elderly status (or in the case of Palpatine, corrupted body). Master Nu in particular is given a lot of attention through facial dialogue, to contrast with Vader’s motionless helmet and palpable silences. Much like those organic bodies, the scenery is given a lot of detail, especially to the damage dealt in the duel between Vader and Nu. To contrast, while even Vader is given a sheen on his armor in spite of the combat, the clones of the Coruscant Guard are shown with very generic, barely emphasized lighting and shading, to draw attention to their lack of importance overall in comparison to the others in the story.

David Curiel’s coloring is very variable. There is an extreme emphasis on contrast when dealing with combat, especially the blue of a lightsider’s attack against the red of a darksider. Lightsaber motion is given a blur, tinting scenes where one passes accordingly to give a similar feel to the films. In scenes of more focused calm, there is nothing but the red lighting of the interior of a ship, without any contrast from representative of the forces of the light side. However, the most important use of color is during an attempted suicide, wherein almost all color is drained from the scene, giving the impression of giving up on the world and trying to be at peace with the universe. This desaturation causes the attempted suicide to be one of the highlights of the issue itself.

Although the story’s conclusion was practically preordained, the mixture of Soule, Camuncoli, and Curiel’s work on the plotting and representation of “Darth Vader” #10 definitely sends it off in interesting directions.

Final Verdict: 8.0– A good Star Wars story conclusion that, while predictable on some level, remains well-written and artistically assembled on the page.