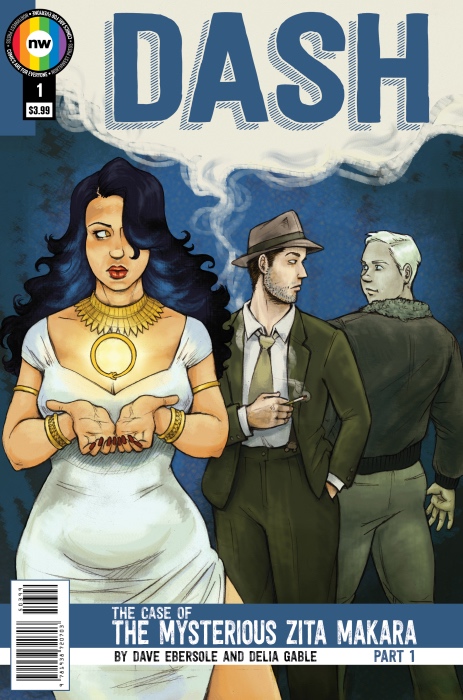 Taking a page from the hardboiled detective genre, “Dash” includes an out detective, Egyptian lore, lovers’ quarrels, mysterious artifacts, and a spree of homicides. Dave Ebersole and Delia Grace work together to bring out a fun and thrilling romp through an old-school Los Angeles. 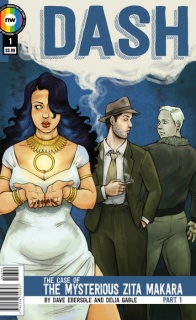 The facts are these:

1.) “Dash” is a hardboiled supernatural murder mystery series set in Los Angeles in the 1940s.

2.) It’s written by Dave Ebersole, illustrated by Delia Garble, and released by Northwest Press, an independent publisher based out of San Francisco and specializing in comics targeted toward queer audiences.

3.) Our story finds Dash, a private detective, investigating a series of violent death around the city, the victims burned, suffocated, and with their very life force sucked out of them.

4.) Once a hero cop, Dash was unceremoniously kicked off the force when his sexual orientation came out (though it was more because he denied the advances of his commanding officer); instead of going into hiding, Dash opens a PI business; while he never denies who he is, the homophobia of the period is definitely holding him back from better business.

5.) Dash is also dealing with this mysterious woman, this femme fatale (because even a gay-themed detective story needs a femme fatale) who wants him to make a drop on some mysterious object.

7.) He’s much more concerned with the return of his lover, previously off on some adventure and now, of course, involved in some shady operation that apparently will make them both ridiculously rich.

9.) Although a hardboiled detective mystery, Ebersole and Gable keep the tone balanced.

10.) Yes, there’s murder and death and nefarious characters and possessed ancient artifacts, but there’s some real heart to the characters, in the way they talk to each other, interact, and respond; the supporting cast adds some fantastic flavor to the city, from the supportive cop to the two caddy secretaries.

11.) Ebersole is not interested in moving quickly through his story.

12.) He takes his time developing the world and the characters, so while neither of these issues make crazy headway into the overall plot, you still feel like there’s much the book offers in terms of character, setting, and mood.

13.) He embraces the genre tropes, not subverting them so much as using them to the narrative’s benefit; it’s a confident tone, an assured approach.

14.) The slower pace also makes issue-ending events — the twists, the revelations — more effective: Ebersole builds toward them, allowing us to casually observe rather than bombarding us with plot details.

15.) Delia Gable also maintains a low-key approach in her presentation.

16.) Her style has this sort of Archie Comics/”Love & Rockets” cleanliness to it, with confident strokes, effective staging, and an emphasis on expression over action.

18.) Her clean style and neutral layouts (no crazy panels ontop of panels here, no characters bursting out of the frame, just clear, concise storytelling) help balance the plot elements Ebersole does throw in: none of it feels out of place or like the book is too much of one thing, and you buy into the world all the more because of that.

19.) “Dash” is a bi-monthly series, so the time waiting between issues can be excruciating, especially as ‘The Cast of the Mysterious Zita Makara’ develops more and more.

20.) It’s still a great read, and Ebersole and Gable create strong tension through humor, empathy, and mystery, keeping it engaging and a blast to go through.