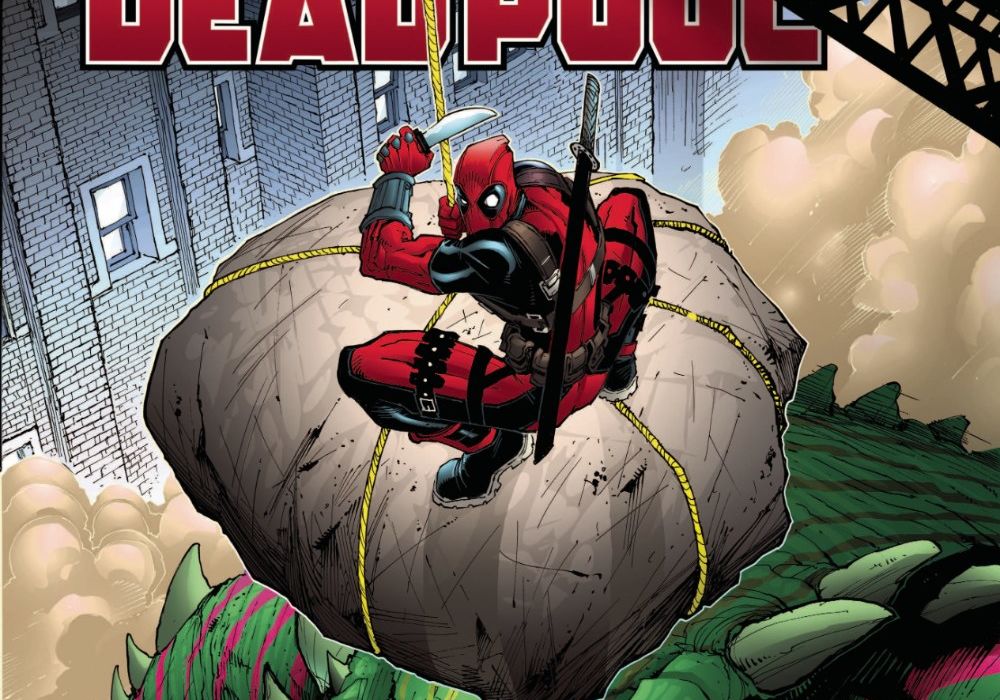 Slowly but steadily, comics are starting to return to speed. One eagerly-awaited series return is “Deadpool,” where Kelly Thompson has made him the king of the monsters, teamed him up with Elsa Bloodstone, and perhaps most importantly, put Jeff the Land Shark in his care. How does this issue play out? Let’s find out. 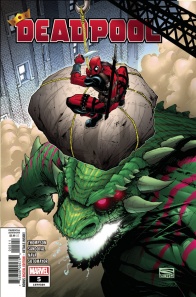 When last we saw Deadpool, he’d just finished fighting Kraven the hunter. This chapter stands as more of a standalone issue, where we see how heavy the crown weighs on Deadpool’s head.

Being the king of monsters means more than just boogeymen and werewolves; there are kaiju as well, including the monster in focus of this issue. (As Mystery Science Theater 3000 pointed out, “every country has a monster they’re afraid of in their nation.”) So what starts as an outing with Jeff and a juvenile kaiju turns into a dilemma for the new king as he has to deal with an unruly subject.

In most Deadpool comics, things would quickly turn violent while still having time for plenty of witty remarks. But this isn’t any Deadpool comic – it’s a Deadpool comic driven by character growth and tough choices. What we get is Deadpool trying his best to act like a proper ruler, even when every sign points towards violence being the only answer.

And I have to say: it works remarkably well. Including Elsa Bloodstone in the “Deadpool” comics is a brilliant move, and I’m not just saying that because “Nextwave,” which introduced me to the character, is a longtime favorite. The comic provides some solid dialogue between the characters where they debate whether or not there’s an alternative to killing, and Deadpool is trying as hard as he can to do the right thing. I can’t call her the voice of reason or the voice of violence, but she falls somewhere in-between; a voice of reasonable violence, one might say.

In the end, the comic leaves us sympathetic for Deadpool and with a better understanding of his mindscape. At the same time, it provides great character chemistry between him and Elsa – two characters with violent histories but very different goals and outlooks.

That’s not to say we don’t get some good old fashioned Deadpool humor and violence in-between, of course. Kelly Thompson works in humor seamlessly, like a well-framed pair of panels where Deadpool gets blasted by lightning breath and has an almost Looney Tunes-esque pose as he stands there smoldering. The humorous moments don’t clash with the more dramatic debates, but they keep the levity up even when the conflict grows darker.

Of course, I can’t talk about this comic without mentioning Jeff the Land Shark.

Jeff is amazing. Just his occasional “mrr” makes the character so adorable, a sentiment shared by most other characters. Yes, if you want to get Deadpool mad, just threaten Jeff. Artist Gerardo Sandoval gives Jeff a little more of a shark-like look, with fins replacing his front legs, but that doesn’t make the little guy any less adorable.

This brings us to the artwork itself. Gerardo Sandoval’s artwork is well-suited for the series, using thick lines to outline the characters cleanly while filling them in with plenty of details. The designs are packed with style, especially when it comes to the monsters.

When action breaks out, it’s intense and fast paced. There’s some rather cinematic shots of Deadpool and Elsa fighting on a kaiju’s head, not to mention how enormous the monster appears when we see Deadpool talking to him. At least a few shots show Deadpool leaping into action, swords swinging, and it looks great every time.

But one of the most important parts of a Deadpool comic’s art is how the artwork can convey Deadpool’s expressions, even when he’s wearing a mask. Fortunately, the comic manages that nicely as well. Adjustments in the size of his eyes, the shading around the face, and Deadpool’s body language convey his emotions nicely. It’s easier to get a read on Elsa, who doesn’t wear a mask, but she’s given some nicely expressive moments as well.

Chris Sotomayor’s color work adds plenty of shading, but also a nice range of colors that pop against each other to provide a clear character contrast. The use of lighting in this issue of “Deadpool” is worth noting, as the team makes good use of the bright lights from the lightning breath and adds depth to the character with how they’re illuminated.

Overall, “Deadpool” #5 is a great jumping on point for readers, a solid standalone issue, and an important piece of the overall story Kelly Thompson is telling. If you were on the fence about the series until now, this might be the issue to make a difference.

Final Verdict: 8.5 – An excellent Deadpool story, bringing in humor, heart, violence, and baby Land Sharks. What more could you ask for?