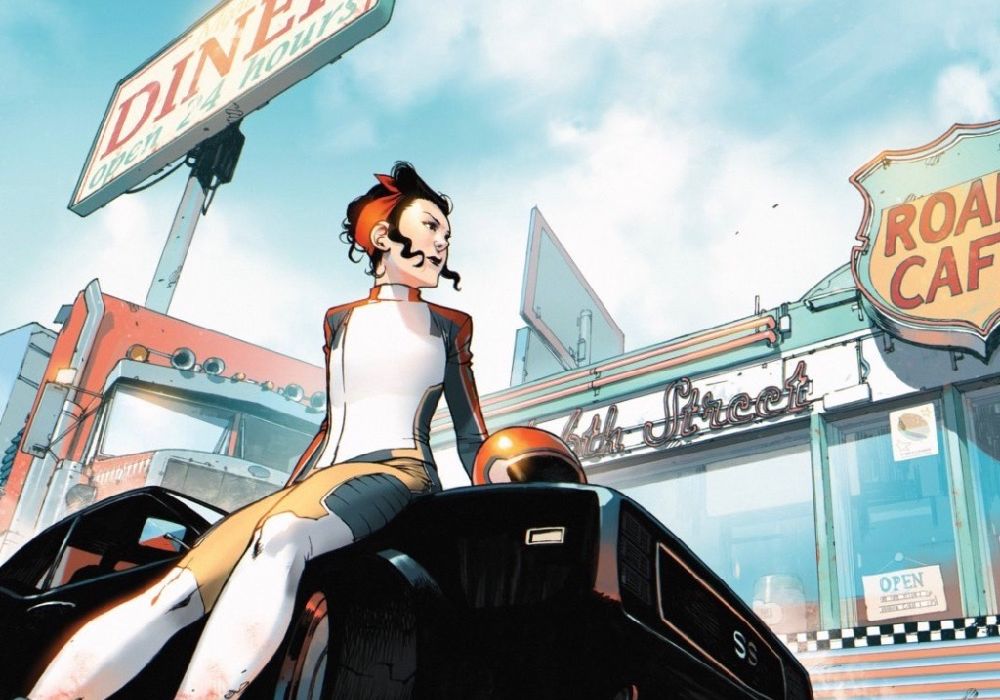 Rick Remender’s story is built from familiar pieces that many pop culture fans will easily recognize. Still, there’s an intriguing undercurrent here, as well as some fantastic art. 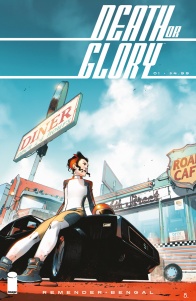 Meet Glory, raised off the grid in a convoy amid truckers—the last men and women fighting for true freedom on the American open road. Now, in order to pay for her beloved dying Father’s surgery, Glory has three days to pull off four dangerous cross-country heists with mob killers, crooked cops, and a psycho ex-husband all out to bring her in or die trying. The new ongoing series by New York Times bestselling author RICK REMENDER and legendary French superstar BENGAL brings you a high-speed chase across the American West that examines our dwindling freedoms and the price paid by those who fight for an untethered life, in this special double-sized first issue with 40 pages of story!

Coming in at 40 pages for a price tag of $4.99 “Death or Glory” #1 is almost a straight-up double issue. Structurally, however, it doesn’t quite read that way. After a brilliant opening scene and intriguing introduction to the main character, things bog down in the middle before the inevitable car chase ensues, eventually culminating in a completely unexpected cliffhanger that hints at potential greatness. In short, I’m not entirely sure we wouldn’t have been better off with two separate installments that feature a more traditional narrative structure and pacing. As nicely as the story begins and ends, the middle feels too much like filler, lessening the impact and ingenuity of the comic.

Things begin with an offbeat, “Pulp Fiction” kind of vibe as two local yokels engage in a very indiscreet conversation in a burger joint. Suddenly, a white haired stranger with very pale eyes shows up and orders an oddly specific but completely unrealistic number of cheeseburgers less than 5 minutes before closing time. Needless to say, the two employees respond less than enthusiastically and another customer intercedes, asking the stranger to give them a break. The stranger coolly responds, obliquely yet menacingly, “I’m requesting they fulfill their meager responsibilities. It isn’t much, but this is one end of the social contract entrusted to them.” From there, things aren’t resolved with mere words and the scene that ensues is both outstanding comic book fare and great storytelling.

For the next several pages we meet Glory Owen, the female protagonist whose name writer Rick Remender (presumably) couldn’t help but allude to in the pun-filled title of the book, a harbinger that things are about to get more predictable and formulaic. Suddenly we’re in the midst of a pretty standard “good people who’ve made bad choices” story where the only solution, it seems, is to double down and even more extreme choices.

Thankfully, this is also where the impeccably composed, wonderfully detailed, beautifully colored art of French illustrator Bengal fully asserts itself and takes over. Remender offers up boilerplate lines of dialogue such as, “If you don’t hear from me in a couple of days . . . listen to this,” while Glory hands her friend Sandy a microcassette recorder, but Bengal keeps it fresh. A perfectly paced wordless scene in Glory’s bathroom starkly reveals her inner turmoil and nagging misgivings, two pages later a cinematic splash page underscores her determination and decisiveness. Amazingly, Bengal loads lots of his panels with tons of original details that ground each of the scenes in a very specific place, but he never loses focus. The characters are crisp, expressive and easy to follow. The rhythm of his colors is equally impressive, balancing cool and warm tones that echo Glory’s emotions.

As for the inevitable car chase that even a brief glance at the cover implies, the pacing is outstanding while the panels, framing, page layout and shot selection efficiently and effectively tell the story. The colors, are the other hand, are unexpectedly vivid, almost garish, as though trying a bit too hard to underscore the danger. It’s engaging and looks quite unique, but doesn’t really break any new ground.

Ultimately, Remender builds the story from many familiar pieces with a couple of key plot twists thrown in. Glory’s interior monologue feels authentic, if not particularly unique or revelatory. Similarly, for the most part, the secondary characters feel pretty familiar to anyone who’s read a comic book, gone to the movies or watched TV in the past three decades. Indeed, they are “types” or tropes more than fully fleshed-out human beings. Still, there’s an intriguing undercurrent here that will keep you turning pages to the end. Once there, you’ll be richly rewarded with an unexpected reveal that promises to change the tenor of the whole story. I’m not at all sure where it will go, but I’m going to bet that things are not what they seem.

Final Verdict: 7.3 The book begins with a jolt and ends with a lot of promise, but tends to sag in the middle. Thankfully, where the script is lacking, Bengal’s art carries the load.