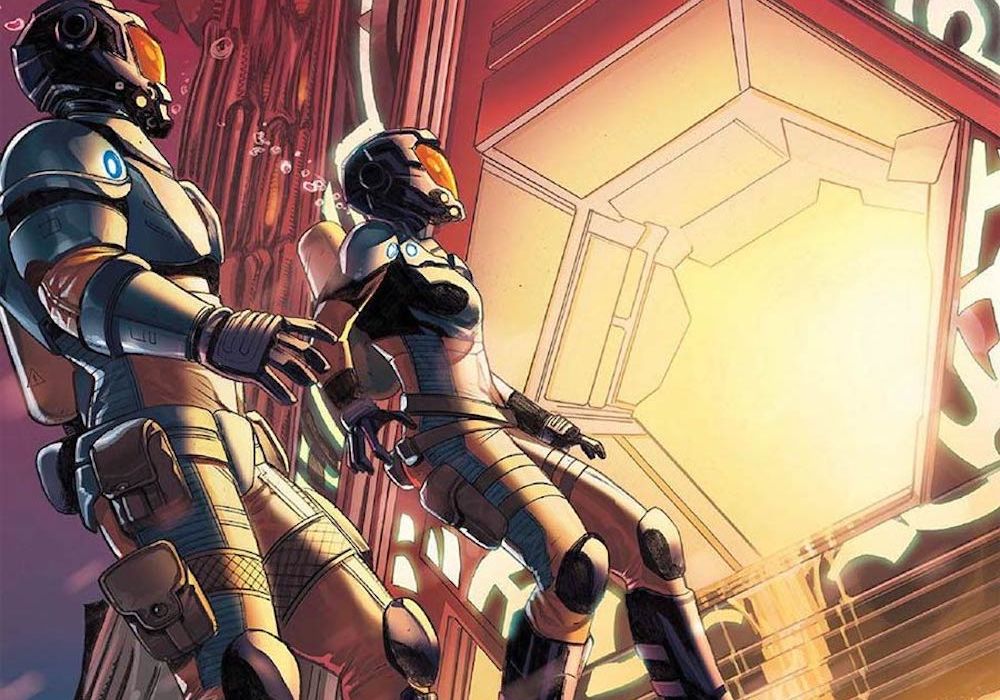 With the dawn of a new arc, science fiction adventures lead their way toward anthropology and quite a lot of intrigue, delving deeper into the society and backstory of the series that stretches back farther than anyone thought. 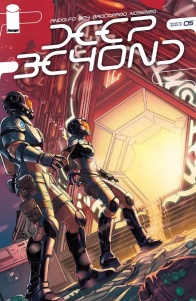 The crew is exploring the secret underwater facility they arrived at, but it seems there is still no trace of Pam… What’s the mystery behind this place? How will they be able to find Pam?

But there is more! What is that strange “structure” they came across? So many questions, one certainty: they cannot afford to let their guard down…

With “Deep Beyond” #5, Mirka Andolfo and David Goy begin a new plot arc of their science fiction adventure. This story, with multiple different factions and seemingly interstellar locations, seems like it could be difficult to include new readers without copious amounts of exposition and otherwise explanation of the various individuals at work. Given the status quo, how do Andolfo and Goy rise to the challenge?

Unfortunately, the writing team does not do a particularly good job at providing room for newcomers. Even as it is a new arc, incoming readers would be hard pressed to truly understand what is going on, or to grasp the identities or goals of these various factions. Exposition does exist, but there is not enough to understand the situation or why we should care about any people therein, and it largely relies upon the previous issues’ information rather than drawing in anybody new. Individual characters, while entertaining to some degree and somewhat relatable in their fears, are largely forgettable without much to latch on to in terms of names or characterization, and the apparent villains barely even get that much to have readers actually care about what they may or may not intend.

Yes, a momentary conflict with the apparent primary female character was exciting, as was the revelation that led her to stop running, but after that, Andolfo and Goy’s plot descends into nigh-incomprehensible technobabble (barring some time oddness) and spoken-of wonder in-world that does not do much to justify itself. In some particularly jarring dissonance, the most shocking element in the story is merely glossed over, while the rest is seen as the surprising part.

It is not complete failure on the script side of things, as Andolfo and Goy do put forth some interesting ideas. For example, the idea of a cage that does not have bars, but rather acts as a perpetual looping environment where walking through one end causes you to exit the other and end up remaining within confinement, is an interesting and unusual method of containment that often is overlooked or not used in science fiction, giving rise to the idea of a culture that has mastered some elements of space-time that humanity has yet to discover. The implications of what else they influenced in human technological advancement is much harder to swallow and rather cliched, but it is interesting enough at times to pass by the one or two ridiculous comments.

Perhaps newcomers are just not the intended audience. The script lain out by Andolfo and Goy may indeed bear its own weight and be rather entertaining. These characters may be complex and gripping, their location truly extraordinary. Unfortunately, none of that complexity really gets across to someone just picking up “Deep Beyond” #5 as the first look into this strange universe.

Andrea Broccardo helps to make up for what is lacking in the script with his excellent illustrations. The facial expressions of various characters help to showcase their personalities very well when the script supports it, especially in cases of high stress or shock. The designs around the extraterrestrial entities and environments are both otherworldly and a little relatable at the same time, allowing for them to fall deep into the uncanny valley of design, likely deliberately. At the same time, the facial expressions shown help to keep things relatable, as while the humans already seem easy enough to understand, the otherworldly entities also are given enough expression to both seem alien and have just enough shock, curiosity, and surprise to keep them from being completely incomprehensible to the point of readers not caring.

Perspective is especially prominent in Broccardo’s illustrations on “Deep Beyond” #5. The distances traveled are enormous indeed, and at times, tricks of point of view, such as a very close focus that disguises a grievous injury, helps to enhance shock when the truth of what is happening is revealed. At other times, a wider point of view helps to give a surprise in a different way. To wit, a viewpoint from far, far away with a smaller inset panel demonstrates where a person is in the total perspective of the entire area, as well as how far away they are from any place to escape their current predicament.

At times, Barbara Nosenzo’s colors, especially in terms of backgrounds, are dependent upon the tone of the scene and the mental state of the characters more than the true lighting and color of their surroundings. Splashes of color indicate their feelings or stress, or at times their wonder. Only when the characters calm down do colors seem more indicative of what they actually see, such as warm hues during a scientific discussion or cooler ones in quieter scenarios, helping to excite or calm readers. In general, the color choice seems to indicate what the apparent protagonists of a given scene are thinking, particularly in those high-emotion situations.

Final Verdict: 6.5– “Deep Beyond” proves somewhat interesting, but not really enough to entice a new reader to continue forward.