For the better part of his run on “Detective Comics,” James Tynion IV has been exploring the nature of villainy and heroism for Clayface. And as his story is coming to a head over at the main series, this annual covers, with great ability, what were the missteps, tragedies and decisions that led Basil down this path. 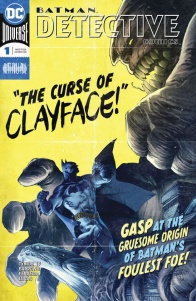 ‘Clay’! Here it is: the shocking, heartbreaking origin of Clayface, including his first conflict with Batman! Actor Basil Karlo was on the cusp of fame and fortune…the kind he had dreamed of through his painful childhood…until a accident robbed him of the good looks that took him to the top. But scars don’t make you a monster-only the darkness in your heart can do that-and in the wake of the accident, Karlo’s darkness is revealed!

Annual issues have a negative reputation for being inconsequential to the plot and characters of their respective series. “Detective Comics Annual” #1 is anything but, an origin story laid out here is so compelling and touching, one cannot help but to understand, and sympathize, with the tortured mind of Basil Karlo, a.k.a. Clayface. This issues reads like a secret glance behind the curtain that is his life in two distinct, overlapping moments: his youth, focused on the interaction with his father and his young adult life, on the days leading up to his monstrous transformation and the consequences thereafter.

It is not undue that this book is labeled as a “James Tynion and Eddy Barrows feature:” the double entendre addresses both the Hollywood backstory for Basil and his dad but also reflects how the issue truly is a combination of art and plot. Having said that, it should also have included the colors of Adriano Lucas as the main feature. And not just because it is great, but also given the critical role it injects into the narrative.

As the issue opens in Basil’s younger years, there is a definitive choice to use sepia tones, not only as those fragments are told in the past, but also to reflect the clay tonality Clayface will assume in the future. As an opposition, the present day colors are shiny and bright, reflecting Basil’s ascending movie start career and how nothing bad could happen to him. However, what is truly ingenious about Adriano’s impact is that the sepia tonality seeps into the present sequences gradually, on the same pace as Basil takes the steps leading to his transformation and as tragedy seems to surround him. The issue transforms into clay as Basil transforms into Clayface.

Another interesting framing device occurs when Barrows lays out the past pages in panels formed by movie celluloid shots. It not only provides a very clear distinction between past and present, but it also acts as further reinforcement that Basil’s life just prior to Clayface is become something surreal, movie-like. The exact moment when these celluloid panels are first used in the present are icing on the cake, narrowing down when the final steps into madness are taken. Barrows also delivers on two critical areas for the book: on how deformed Basil can look after certain events happen to him and how the final birth of Clayface is enormous, dwarfing anything close to him, Batman included.

Plot-wise, there is nothing groundbreaking about it, but it is executed very aptly by Tynion. That is no surprise, as he has shown on “Detective Comics” how well he understands these characters and how invested he was in Clayface in particular. There is also a secondary plot (weaved into the main one) that also addresses a lingering story point from the main series, linked to one of the members of the ‘First Victim’ group. It adds further color to a complex relationship that “Detective Comics” readers will be pleased to see.

If the plot itself is not unique, character moments are, especially in two instances. The first one is handed by Batman, when he reinforces his belief that one can turn traumas into positive actions, rather than to negatively lash out at society. The second one is even more special and it takes place when past and present converge at the end. At a great reveal moment, Tynion pulls the final curtain on why Basil made the choice he did, or better still, why it seems he had little choice on the matter, given how he was brought up, his inner fears and traumas. There is nothing explicit about it and it needs to be read between the lines, but the question it asks are what were the lessons from his youth that carried all the way to those final decisive moments. Are we monsters because we choose to be, or is our inherent monstrosity forced upon us? This books stays with you after you finish those last pages.

Final Verdict: 7.7. – “Detective Comics Annual” #1 breaks away with the annual tradition of having lower value than its main series by delivering a well-crafted, layered and compelling analysis into the mind of a monster . . . and a victim.