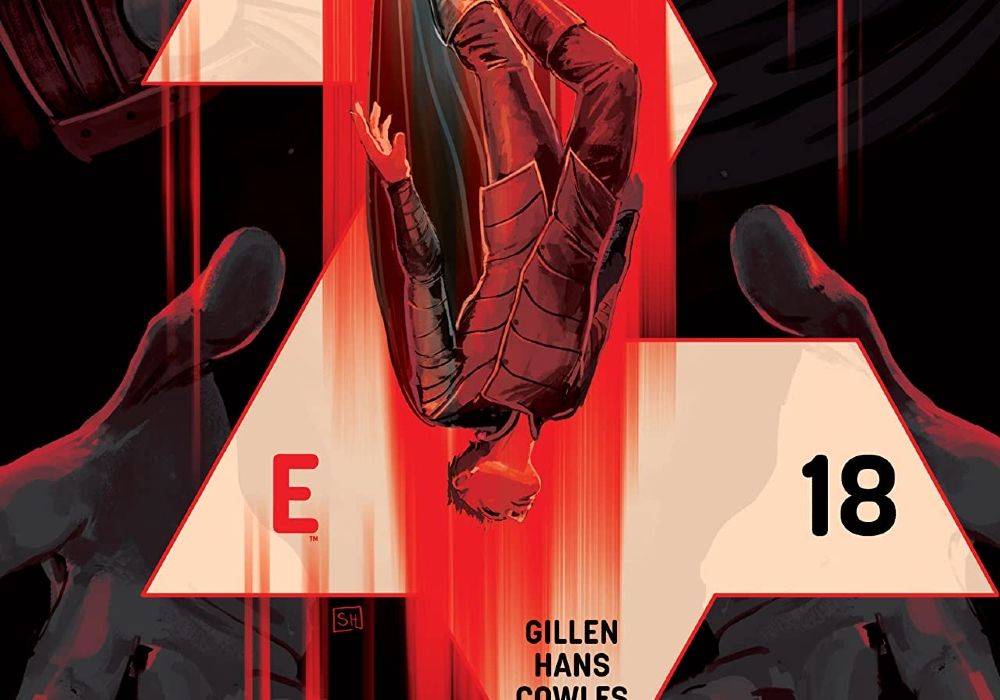 As “Die” starts making its way towards its grand finale, issue #18 takes a minute to focus on the characters. Not only does it show us a little more of what happened to them after they first returned to the real world, it delves into what happened to Sol when he was left behind, and Ash’s own doubts.

Suffice to say, there’s a lot. So let’s take a look and see what happens. 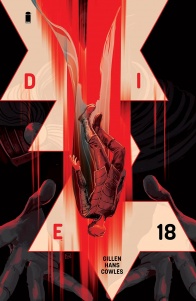 “Bleed,” Part Three
Once upon a time, there was a golden child. He’s been gone a long time now. What happened to him? Let’s find out.

For all that we’ve learned about the events and world in “Die,” there’s still so much that we as readers have yet to fully see. Often times we have to go off of comments the characters make during their conversations, or take them at their word. Other times we’re given flashback scenes that reveal mysteries and delve into the characters more.

We get the latter in “Die” #18, split between Ash and Sol. Ash’s character moments are delivered through flashbacks and internal monologues, whereas Sol’s flashbacks are accompanied by him reading from a journal he left behind. In short, it gives us a lot of new character insights.

Through Ash, we see how everyone started coping and falling apart after they returned to the human world all those years ago (including the previously alluded to relationship and subsequent breakup between Angela and Chuck). It explores the trauma they experienced, as well as the guilt Ash feels as she blames herself for Sol’s fate.

Through Sol, we see exactly what happened to him when the rest of the party left Die. While it throws a twist at us that changes how we view past events, it also provides character-focused information to make him more sympathetic to the readers and provide more information about the world of Die and the overarching threat.

Suffice to say, this is a story-heavy chapter, but then, what issue of “Die” hasn’t been?

Naturally, it also wouldn’t be “Die” without working in fantasy and literary references into the very fabric of the world, and Kieron Gillen chose a great one this time around. Without going into spoilers, it’s an instantly recognizable scene, which both the readers and characters can understand in an instant. This is made all the more clear thanks to Stephanie Hans’ artwork, which captures all the details and even lighting effects needed to really make the moment stand out.

(On a lesser but related note, I also liked a brief in-character reference to Red Dwarf, if just because it’s a great show that more people need to watch.)

Kieron Gillen is a master writer, and his strengths are on full display here. The storytelling is well-paced, intense, and dramatic as it propels the plot forward and reveals new information. The character voices remain strong, and we’re given important character-focused questions and dilemmas. Ash’s narration, which carries most of the issue, brings us into each moment and pulls us along to the next.

Of course, the dialogue is equally vital. The way the characters talk compared to the denizens of Die has always been clear, but the importance of their dramatic dialogue plays a role in Sol’s flashbacks as well.

I have nothing but praise for Kieron’s writing. The same can also be said for the art, of course, as Stephanie Hans turns every image into a piece of fine art.

Where do we even begin with the artwork? There’s the lovingly detailed characters and scenery, like a massive spiraling dungeon that descends deeper and deeper down with varying architectural designs. Yet the details can also become more abstract when needed, emphasizing the otherworldly nature of the setting.

There’s the way Stephanie uses light and darkness to full effect in every panel, casting characters in shadows and illuminating the scenes as necessary for both dramatic and symbolic effect.

And the colors. My god, the colors. Stephanie tends to use certain shades for each scene (usually red or blue) in a way that washes over everything in its select hue. Yet the way she works the shades in each scene makes the images all the more striking, with the colors contrasting or blending to brilliant effect. Her use of complimentary colors strikes a great balance, like the orange light of magic illuminating the blue darkness of an empty dungeon.

The limited color pallet is intentional (as she demonstrates in volume 3, for those collecting the trade paperbacks), and it works oh so well.

The gentle and smooth linework (to the point where the only visible lines at times are created by the different colors), blended with the poignant colors, make every page feel like a painting.

If it sounds like I’m really heaping on the praise, it’s because I am. “Die” is a masterpiece of a comic, with excellent storytelling and equally amazing artwork. It’s unlike any other fantasy or tabletop game adjacent comic (in this case, for instance, the comic came before the game), and is a must-read for fans of the genre.

Final Verdict: 9.0 – An incredibly solid comic that builds on the characters and conflict, accompanied by always stunning artwork.