Our adventurers go to the traditional tavern and world building ensues in “Die” #4. 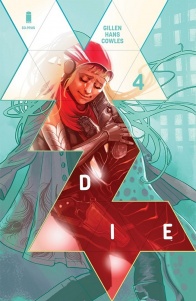 “FANTASY HEARTBREAKER,” Part Four Our heroes reach the civilization of Glass Town and do what heroes have always done upon reaching civilization. As in, go to the pub. As it’s DIE, you can guess people don’t exactly get happy drunk.

Key to any role-playing game, much like many a story in general, is world building, a facet that is true within the eponymous setting of “Die” #4. Using Dictator Ash as a reference point as usual, Kieron Gillen utilizes the arrival at Glass Town to give a wider look at the world in general, from the history of its England vs. Prussia dark fantasy war to the makeup of such a town in and of itself.

With the dark world of “Die,” Gillen seems to revel in the dangerous, despair-driven world he has created, not unlike his work on “Uber.” However, unlike the “war is hell” atmosphere of “Uber,” the eponymous role-playing setting of “Die” allows for some more levity, some time to calm down and experience even the slightest bit of joy for which readers can cling on to like a drowning man to a raft in a storm.

Speaking of drowning, there is the setting in which this kind of a breather is even given room: a pub in the nearest town, the most traditional of adventurer meeting areas around to the point that it has become a narrative trope in and of itself. Still, much like many parts of “Die,” the classic trope is turned in an interesting way to make it the series own, demonstrating how gathering around for a drink might not be entirely happy. By introducing the apparent bit parts of two dwarves, a bit of a lighter mood is able to sneak in while the band of heroes downs spirits to lift their spirits. Of course, this all quickly turns dark and dour due to the very nature of “Die,” but the fact that there is any levity at all helps a great deal to cleanse the palate. Furthermore, the appearance of someone Angela missed dearly is sure to bring a smile to readers’ eyes, in spite of everything else Gillen puts around the heroes.

Key to “Die” #4’s narrative is the idea that courage can come from many different sources. It can be in battle against a fearsome foe, but for those who face death time and again, that kind of element may not be considered inherently brave anymore. Conversely, those who have far more experience in other settings and are thrust into a combat-based one may see those other settings as the epitome of bravery. Bravery comes from facing one’s fears, not from doing what has always been done. One would be a story, the other a routine. In the case of Matt the Grief Knight, bravery comes from making sure not to let his daughter see his fear about a surgical operation after he had lost a loved one to a similar one in the past. For Isabelle the Godbinder, bravery shows itself in speaking the words of her diaries to a very large audience on behalf of one of her patron deities.

Meanwhile, Grandmaster Sol is present in his very absence, as the story continues to characterize him without him needing to be shown at all. Whatever his reasons for tormenting his former friends, Gillen is able to show how it affects the others, using basic “your princess is in another castle” gaming logic to cause instantaneous despair. Being a killer game master for a role-playing game in real life is one thing, but by having real people trapped within said game, Gillen shows how horrible such behavior comes across to those actual people who suffer from its effects. The closest comparison readily available is that Sol seems to be what would happen if Kevin Flynn decided to turn completely evil in Tron Legacy, applied to a fantasy setting.

Stephanie Hans’s artwork is a large part of what makes “Die” so amazing. Hans is excellent in the use of different perspective shots for different effects, ranging from wide establishing shots to close-ups to anything in between. The wide views of Glass Town itself help to instill a sense of awe over the entire thing, almost (but not quite) letting the readers forget the sheer horror around it all. On the other hand, close-ups help to demonstrate the emotional torque facing each and every character in the party, ranging from calm scenes to hectic ones. The entire composition is shown with very good depth through expert uses of shading, with the darkest moments seeming just a bit darker or lighter depending upon the context, and the brightest ones similarly different in tone depending upon how they are presented. All of these elements are thrown into sharp relief against the tale told by Dour the dwarf, which has a much flatter art style. Far from distracting, the flatter style helps to show how such a tale is in the far past and delves into the realms of high fantasy and fables more than the darker elements present in other parts of the series, at least until its conclusion, which itself is noticeably not actually drawn.

Also key to the art style is Hans’s use of color. The color palette is rather limited, focusing on reds, blacks, and other “warm” colors primarily in the present day, and cooler ones like purple in the past, with some exceptions each. The use of red and brown in particular helps to give a violent feel to the whole thing, with the watercolor style of the coloring giving it’s a unique, smooth, realistic feel in spite of the fantastical world itself while distinguishing it from the more (but not exclusively) “in the lines” coloring style used for Dour’s tale. On the other hand, the use of a purple wash on a flashback helps to calm readers down and also ease them into a more reality-focused story, keeping it inherently separated from the rest around it.

Final Verdict: 8.5– By way of highly emotional storytelling merged with intriguing world building of the eponymous role-playing world itself, “Die” #4 shows continued depth of despair and heights of the possibilities brought about by its world.