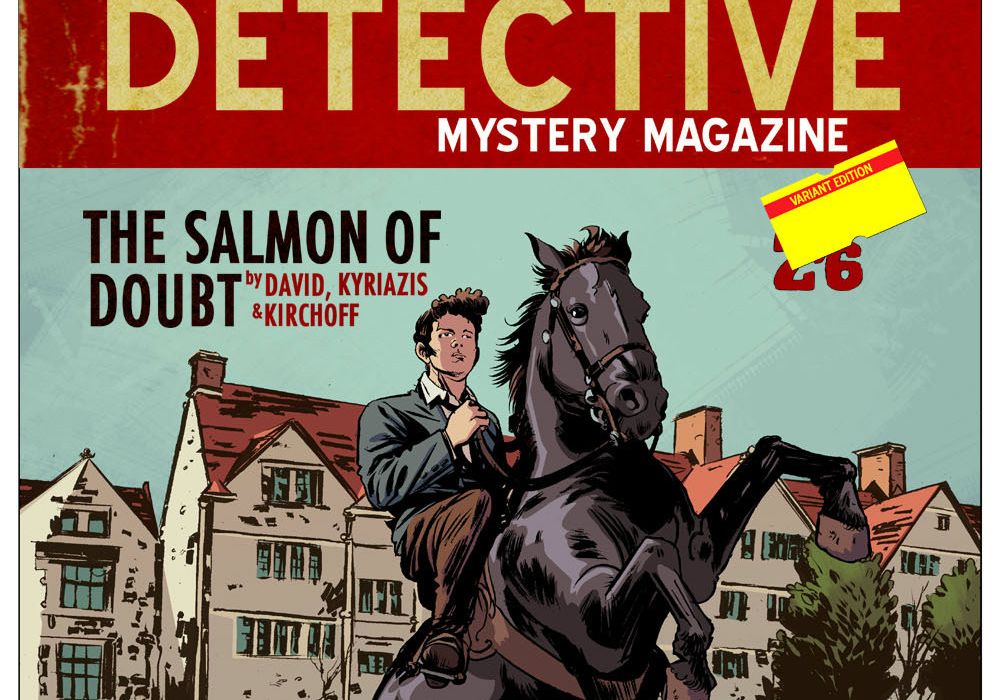 Douglas Adams is, bar none, my favorite author, so it’s good to see the characters and worlds he’s created live on after his passing. Whether it’s through his unpublished works, adaptations of the Doctor Who episodes he penned, or through new adaptations of old works, his unique and brilliant sense of humor lives on.

And so, with a new “Dirk Gently” TV series on the way, now’s the perfect time to check out “The Salmon of Doubt.” 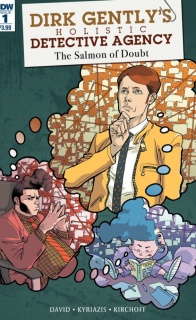 Written by Arving Ethan David
Illustrated by Ilias Kyriazis
Dirk Gently, created by Douglas Adams and shortly to be the star of his own television series from BBC America, returns to comics in “The Salmon of Doubt,” brought to you by executive producers of the show Arvind Ethan David and Max Landis. Plagued by nightmares about a childhood he never had, Dirk returns to Cambridge University to seek the advice of his former tutor, the time-traveling Professor Reg Chronotis. There he discovers that a holistic detective can have more than one past, and his adventures have only just begun… Featuring favorite characters from the original books as well as the cast from the TV series, including Elijah Wood.

While this may be an issue #1, it’s still the continuation of “Dirk Gently” comics from before it, which are in turn continuations of the “Dirk Gently” books (“Dirk Gently’s Holistic Detective Agency” and “The Long Dark Teatime of the Soul”). As such, new readers may have a bit of catching up to do, but a brief narrated recap at the beginning helps new readers understand who Dirk is and what his previous misadventures have included.

Cleverly, the recap is worked effortlessly into the main story, as the very act of recapping involves remembering, and Dirk’s memories are changing. He’s remembering childhood traumas, and yet he knows those traumatic events never actually happened; a unique play on the unreliability of memory.

Dirk himself is an interesting character. He believes in the interconnectedness of all things – and that means literally all things. He acts as though he’s above all things, because he has a perspective others don’t, which can come across as callous or haughty, to the dismay of his assistant, Sally (who doesn’t appreciate being called an assistant).

Of course, there’s much to be said for his supporting cast as well. Sally appears to be the more “normal” person, the audience surrogate who asks Dirk the questions the readers are wondering. But she does have some depth, being a strong character in her own right, while still dealing with some burgeoning emotions for Dirk.

And then we have his cat, Bernice, who is far more intelligent than one would expect a cat to be. However, Bernice spends most of the issue starting up a rather different subplot, involving a sudden random troll attack in the dark alleys of Cambridge. It’s out of nowhere and completely separate from Dirk and Sally, but given the idea of interconnectedness that runs central to the series, it’ll certainly tie in before the end.

Most interesting to me, however, is Professor Chronotis. If the name sounds familiar to Doctor Who fans, it’s because he was an important character in “Shada,” the lost episode written by Douglas Adams (which was released as a novel a few years ago). He was also a character in the “Dirk Gently” novels, since the character did belong to Douglas Adams.

So yes, there is a Time Lord in “Dirk Gently.” And considering IDW is publishing comics of both, it’s not impossible to hope for a crossover.

This isn’t just a minor easter egg, though – Professor Chronotis’s nature as a time traveler is key to the story, as is his room being his time machine (or rather, his TARDIS, but it’s unlikely the comic will describe it as such). There’s a clever setup about an abacus that “burnt out,” requiring him to rewire the system, which sounds like the humorous ramblings of a crazy old man until it becomes clear the abacus was once part of the time machine.

Which brings us to the comedy of the issue. It doesn’t quite capture the wit of Douglas Adams, but it does have its moments. Dirk’s rambling dialogue does manage to match Adams’s style pretty well, and there are some clever moments of randomness.

The humor and character are assisted nicely by the artwork, which remains colorful and clear. The character designs are all very solid, and a good amount of the humor comes from the artwork accompanying the script. Falling off a building into can be an amusing pratfall, but drawing the entire fall in a long panel, with the characters silhouetted, and Dirk flapping his arms around helplessly before landing in the bushes, now that adds to the hilarity of the situation.

The exaggerated expressions the characters can get works nicely to deliver both the emotion and comedy, like how Sally’s face scrunches in frustration when she’s described as Dirk’s “assistant.” Even Dirk’s awkward confusion shows through the artwork, with small side glances and just enough shading around his cheeks to show embarrassment.

During the flashbacks to Dirk’s childhood, the art style shifts to a more comical look, full of exaggerated features and circular cartoon eyes. Given the comic version of Dirk Gently’s massive head of hair, the way it doubles his height in the memory sequences makes it easy to spot him and makes the flashbacks just a tad more bizarre; which may very well be connected to his changing and unreliable memories.

Most interestingly, it looks as though the comic may itself connect to the upcoming TV show, given a brief look at his television counterpart.

Remember, everything is connected in “Dirk Gently,” one way or another.

Final Verdict: 7.5 – A decent start, with strong characters and nice connections to the works of Douglas Adams.