How to portray the adventures of one of Marvel’s main villains, a genius leader of a foreign nation, with a reputation and history of grandstanding and incredible achievements (and failures)? With this debut issue, Cantwell, Larroca, and team fare surprisingly well, despite some shortcomings on dialogue. 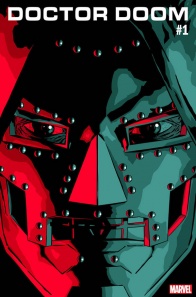 THE CRACK OF DOOM! From Christopher Cantwell (HALT AND CATCH FIRE, SHE COULD FLY) comes a new monthly ongoing series…Victor Von Doom – scientist, sorcerer, disfigured face, twisted soul – has been spending much of his time warning against a trilliondollar global effort to create the first “artificial” black hole. Wrestling with visions of an entirely different life…a better future…DOCTOR DOOM finds himself at a crossroads. (what is he questioning?) A catastrophic act of terrorism kills thousands, and the prime suspect is… DOOM? Victor will have to push his unexplained thoughts aside and focus on remaining alive as the title of “Most Wanted Man” is thrust upon him….Left with no homeland, no armies, no allies, indeed, nothing at all, will the reign of Doctor Doom come to an abrupt halt?

Doctor Doom has been synonymous with adversarial roles since his debut in the sixties. Not only reserved to the family members of the Fantastic Four, Victor Von Doom has proven to be an incredibly challenging villain for the Marvel universe as a whole, given his nuanced personality, resources, and, most often than not, reserved charm. While he is not a stranger to holding his own series – the latest “Infamous Iron Man” being recent evidence of that – it is not common to have him on a regular publication focused on his antagonist side. To that degree, Cantwell and Larroca manage to instill something truly unique with this debut issue, and the few kinks on the armor (pun intended) can certainly be ironed out in forthcoming entries.

First of all, Larroca manage to portray Doctor Doom as this looming, dominant, larger than life presence on every page of this issue. This is done in essentially two ways: by clever page and panel layout, and by the pure illustration and design of Doom himself. On page and panel, Larroca will usually follow a series of smaller frames (like the opening pages, filled with monitor screens), with a wider canvas, as Doom takes up and entire page. Even on a subconscious level, this tells readers that the villain is what truly matters on the story, so he visually takes center stage, literally on some pages.

On the design itself, Larroca opts to go down a very classic route for Doctor Doom, with his full royal regalia in display, from flapping cloak, to huge throne rooms and the always-appreciated concealment of his scarred face when he does take his mask off. Those choices also reinforce the notion to the readers that this is a figure to be feared, revered even, and that being on his presence, even as a passive audience, is not something to be trivial with.

Additionally to Doom himself, Larroca offers two pages that were a joy to behold. The first, a lesson on the visual of vanishing points, as Doom walks towards the frame on a long corridor sprawling behind him. The edges of the page seem to bend into ovals as they become further removed from the central vanishing point, creating the illusion of depth. The second, a page set in the late hours of the evening on Doom’s study, as the lonely moon and lamp lights fill only parts of the room: shadows are cast from behind the titular lead and into the foreboding ground, further adding to that sense that Doom is alone… and that everything is Doom.

Plot wise, Cantwell juggles the story in three main beats, apparently disconnected at this point, but with just enough connective tissue to indicate where the story is going. On the more mundane angle, readers are reintroduced to how petty and vengeful Doctor Doom can really be, as he disposes his vitriol to a reporter offering less-than-kind words about the Latverian dictator. On the more outlandish aspects, readers are also introduced to another villainous companion (who shall remain unspoiled on this review), but portrayed in such an unusual role and feel that it almost – almost – connect as a buddy cop movie gone completely awry. And, finally, the third component of the narrative cleverly explores one of comics most used tropes (that of the “life that could have been”), but delivered in a soft, inspiring way. Cantwell really balances those elements well, creating a sense of anticipation on how they can be combined going forward.

One point of negative criticism centers around the dialogue choices the writer chooses to be uttered by Doom. As he stands, Victor von Doom is one of the most self-assured characters in the Marvel universe, so sure of himself that he often just assumed problems and crisis are challenges for him to conquer. This is not a man who fears the abyss, as he is more than certain that his triumph over it will only make him stronger and make the world perceive him as an absolute conqueror. Because of that, when this same characters seems to lose his temper with curse words or comments that are borderline out of control, it diminishes the polish that goes into building him into a force to be in constant awe of. While one can see the effort to humanize your protagonist to some degree, it actually takes away from the core pillars of the character: a more balanced work on this regard can be found on the pages of “Invaders” and how Namor is portrayed, for instance.

All in all, this is a smaller qualm about a debut issue that is very promising for a series. The stakes and challenges seem to be high and unique. The lead character is compelling, larger-than-life, and the art certainly follows suit on that aspect. And the balanced pacing, alternating among the several aspects of the book, is really remarkable. “Doctor Doom” might just be what the doctor order on a villain-led book.

Final Verdict: 7.9 – Larger than life. Egocentric. Arrogant. Extremely compelling. “Doctor Doom” as a book, just as his namesake lead, might have just made a very strong case for how good this series can be.