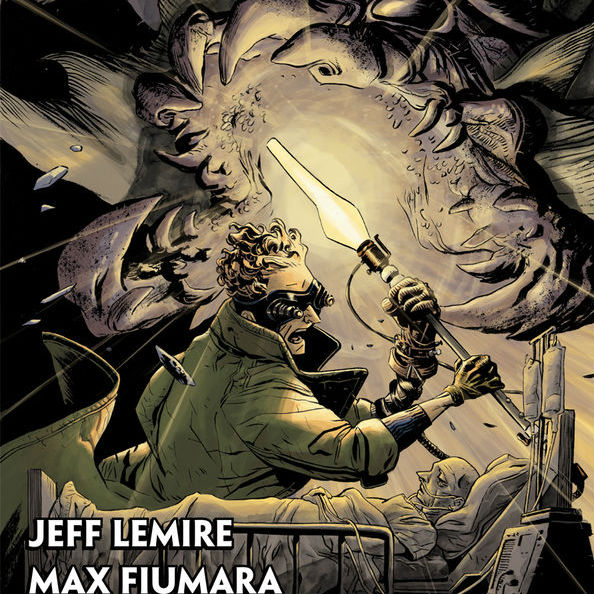 “Doctor Star and the Kingdom of Lost Tomorrows” can be described as an homage to the Golden Age of comics, a re-exploration of aging heroes, a deconstruction of the super-powered genre as regular inhabitants of regular cities. But all of that would miss its true core, that of the consequences of obsessions and of parenthood gone awry. Lemire, Fiumara, Stewart, and Piekos once again present a touching, relatable tale on issue #2. 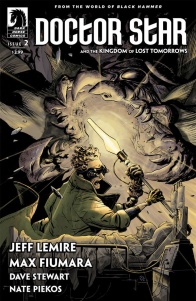 From its first page, if not from the cover itself, it is obvious that artists Fiumara and Stewart are bringing their top game to this issue. As shown throughout the full story, the pair shift from James’s failures to his successes (and vice-versa) by managing there main components: panel layout, body language and colors. Scenes in hospitals, decrepit homes and hell-hole bars rely on tight, claustrophobic panel montages that feel confined: they are small and narrow, only opening up to reinforce the notion of desolation the lead character is going through.

Characters’ body language and facial expressions are embedded into all of that, with some brilliant juxtaposition work done on some pages: in one such sequence, readers see on the same page Doctor Star filled with joy (looking up as he observes a discovery in the past) and frustration (looking down to a loved one in the present). His eyes, shoulder placement and even conveyed age are powerful: how far can a man fall in not so many years.

In the same vein, this issue manages two color palletes in parallel: the first one decidedly muted, sober, gray. They follow the saddened present day that Doctor Star has to face, the result of his poor choices in the past: this is the life and environment of a man filled with regret and every beat seems to reinforce that. The other is filled to the brim with colors, impossible lightning and movement: the apparent achievements of the past, going to the rescue of alien beings in need of help. Even Piekos’s lettering plays a key role: the diary and letters that Doctor Star writes to his son are the only thread that crosses over the time periods, with the same caption style being used both in the sad present moments (when such letters were actually written), but also in the happy past. The latter almost works like a warning, a foreshadowing, telling that not all can be as pleasant and promising as it looks.

It is also entertaining, if less consequential, to see Fiumara and Lemire having fun on including character analogues that are designed similarly just enough to their main counterparts so that readers can recognize them. It makes the issue feel familiar, even if it is telling a story in a setting unknown to most. One of those characters in particular, towards the end of the issue, will bring memories of sagas like ‘Kingdom Come,’ where aging superheroes are pushed into different, far less prestigious positions in society.

And what to say of Lemire’s script? Those who follow the writer on his multiple publishing houses and books know how versatile he can be. But here, on a grounded, domestic even, drama is where he shines the brightest. The exploration of parenthood in the middle of superheroic habits have been used many times in comics before, but rarely with such a firm footing on the consequences of choices. Being a super-hero is not so dissimilar (in the eyes of a child and on the time invested towards them) than having a super-focused professional career. More often than not, it is not about saving people (as heroeing does) or earning money for college tuitions (as a professional career does): it is about feeling valued and rewarded. Rather than being about doing what is good to others, it can turn into getting the accolades from doing good. And on this angle, on this aspect of choices and priorities is where Lemire uses Doctor Star as a tragic hero. A failure, despite his many successes.

What will come next over the remaining two issues of the mini-series should be something very interesting and emotional to follow. Will the path to redemption lead to success… or only to the realization that, even redeemed, heroes can fail?

Final Verdict : 9.0 – An honest, beautiful story of choices and losses, using the incredible and otherwordly to make readers reflect on where life’s focus should be. Combined with a brilliant team effort on the art department, from drawings, colors and letters, this is a must-read.