The newest Gallifreyian visage finally graces our comic pages.  Titan wisely chose to use Jodie Whitaker’s debut as the Thirteenth Doctor as an opportunity to reboot their entire Doctor Who comic line.  Her television debut saw some of the highest ratings in the revived series’s history. Can her comic incarnation do the same? 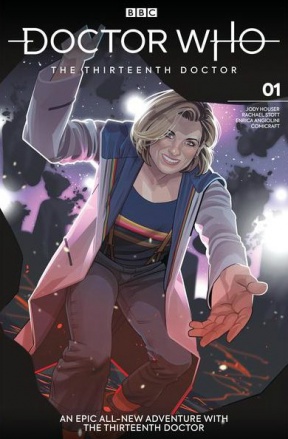 Join the Doctor’s most thrilling regeneration yet on mind-blowing adventures through time and space!

Chris Chibnall’s intentions as showrunner for the Jodie Whitaker era of Doctor Who – – a true clean slate for the series, eschewing classic villains as the Daleks and Cybermen, not carrying over storylines from previous Doctors – – may have left some longtime fans scratching their heads. What is Doctor Who without a Dalek or two?  The impetus for this intention was to take this opportunity with a change in talent, writing, and leadership to give the show a true clean slate for new fans to come on board without a great deal of necessary backstory.

My devotion to my beloved Doctors hasn’t translated to the comics. I just never seemed to enter the comic series at the right time, and when I did, I ended up with events that required a convoluted reading order.  The different sets of companions in comics and TV shows also proved confusing.  What was canon, and what wasn’t?  Titan Comics embraced this idea of “new dawn, new day, new Doctor” by also rebooting the entire Doctor Who comic line, winding down their classic Doctor comics series, mirroring companions from  TV in the comics, and declaring that the comics are in fact canon to the TV series.  This arc is titled ‘A New Beginning’ and it’s about damn time.

Though this may be a fresh start for the line, this issue throws you right into the thick of the action.  We open with a futuristic art heist (in 1999?) but then switch to around 1,900 years in the future with the Doctor and her companions (Yasmin, Graham, and Ryan) watching sentient nebulae.  It’s a peaceful scene, but not for long as Graham discovers a strange vortex of light.  It’s a signal that someone needs some help. Is it our alien version of The Thomas Crown Affair? Perhaps, as one of them falls through that same vortex.  But there’s not much time to figure that out as everyone – – Doctor, companions, unnamed art thief – – have an unexpected meeting with the Grand Army of the Just.  Never say traveling with the Doctor is boring.

A challenge for any good first issue is finding the balance between world-building and plot-building. Jody Houser manages to find that balance decently here, even while direction on where this first arc is to go is nonexistent.  She does not waste time on setting up who these characters are (you either know them from several weeks of watching the show, or the introductory page in this comic) but gives you hints of personality, mostly on the Doctor. She’s translated well what Jodie Whitaker gives us on the small screen; what you have seen on TV in the past month is exactly what you get in print: altruistic with a hunger for adventure. I’m hoping that future issues do the same for our companions as well; details on our companions that provide necessary dynamic for the series are missing.

Rachael Stott’s art is glorious. You can tell she’s having a grand old time drawing the scenes of the TARDIS interior, the planet of Blecplam and its sentient nebulae, and the landscape of the planet where they meet the Grand Army. Just has Houser has done in her script, the art finds that balance of advancing plot and building up the universe, all while being a visual feast. She handles detail with care to set the right tone. The Doctor and companions look just like their TV counterparts but not overly so.  Shading on faces does give them an overly angular look; here is where I would have preferred a softer pen. Erica Eren Angiolini’s coloring has that same sense of joy. She doesn’t shy away from it, and knows how to complement color to scene. And of course, her coloring on the Doctor’s costume is spot on.

If anything is out of sorts in this debut, it’s the spread on pages 14 and 15 courtesy of guest artists Giorgia Sposito and Adele Matera.  The artwork is lovely to look at and well-executed; Sposito and Matera would do well as guest artists on this series if needed. However, it doesn’t serve anything towards the plot and is just different enough to appear out of step with the rest of the book. It’s a waste of space in a book that needs all the space it can get to launch this new universe.

Jodie Whitaker’s television debut as the new Doctor has been nothing short of extraordinary.  Can the same be said about her comic debut? “Extraordinary” may be too lofty of a word, but it’s certainly well-executed and may just make this TV Whovian a comic Whovian.

Final Verdict: 7.7 – – Things may be just a touch thin on where this plot is going, but as our Doctor says: isn’t that uncertainly what keeps life interesting?