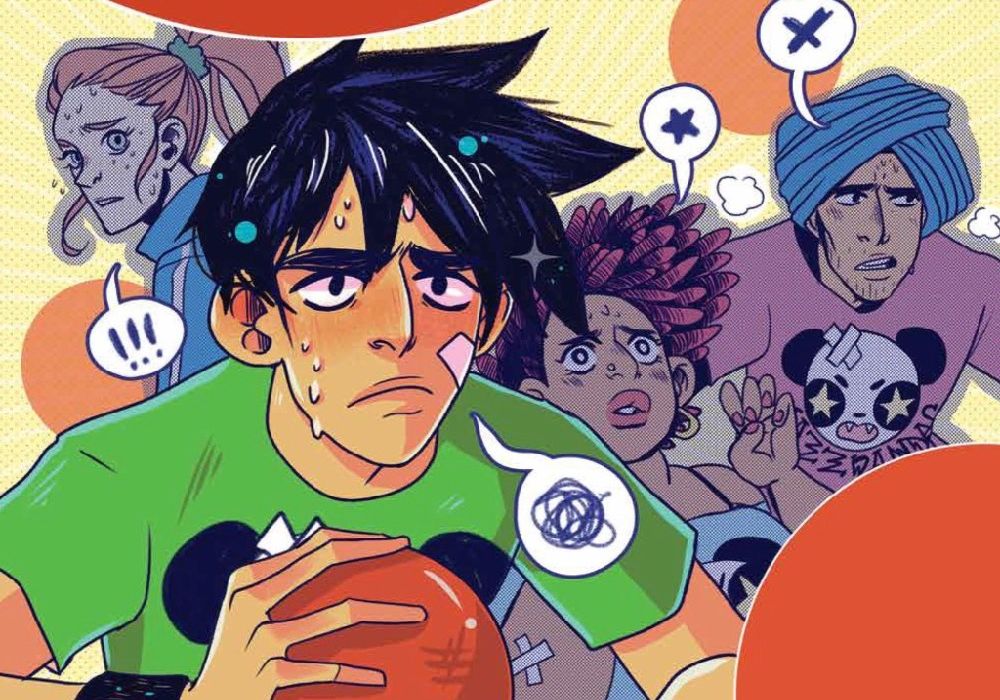 Like the debut installment, “Dodge City” #2 is a colorful, action packed issue that nonetheless makes space to explore its diverse cast of characters and the relationships between them. (Warning: contains minor spoilers). 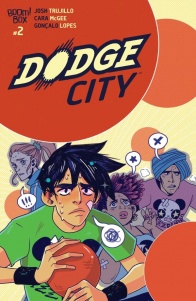 Tomás is no longer the newest player on the Jazz Pandas, and with another teammate they stand a better chance of making it through the season, if they can manage not kill to each other first!

First, let’s get this out of the way. With the addition of “Dodge City” to a lineup that already includes “Slam” and Fence,” the Boom! Box imprint from BOOM! Is quickly becoming the go to source for some of the very best Manga-inspired sports comics anywhere on the planet. It’s a niches they clearly love, understand very well and execute at a high level. All the more incredible, perhaps, when you stop to consider how utterly dependent sports comics tend to be on well worn tropes such as “the new kid in town who seizes the opportunity to carve out a new identity” and “the team of hapless misfits who band together for a common cause,” two of the cornerstones on which the foundation of “Dodge City” is built. As with any story, however, it’s not necessarily the various components that make the work fail or succeed, it’s what the creators do with those basic elements that makes all the difference.

In this case, the creative team behind “Dodge City” takes a familiar set of premises that nearly border on the cliché and deftly, almost invisibly turns them into the perfect vehicle for exploration of the book’s ensemble cast. I mean, that’s not exactly a revolutionary concept, either. Especially within the context of stories that center on sports, it’s never really about the competition. The real action has little to do with whatever happens on the rink, field, pitch or court. Victory doesn’t always go to the individual or team who wins and sometimes the pain of loss is most acute on the championship podium.

Happily, it’s way too early in the series to know whether or not the Jazz Pandas—the dodge ball team at the heart of the action, led by the newcomer Tomás—will win the proverbial championship or not, but that’s exactly the point. With the stakes getting higher and higher and the competition heating up, the characters are forced to grapple with their own inner demons and complex interpersonal relationships in an increasingly pressure packed situation where the outcome is still wildly uncertain. It’s not quite the fog of war, but there’s a palpable red rubber haze that hangs thick over all of the action, occasionally punctuated by a sudden shoom, thunk or whump.

On that note, if there’s one element of the story that seems consistently outstanding, aside from the book’s characterizations, it’s how the talents of writer Josh Trujillo, illustrator Cara McGee, colorist Gonçalo Lopes and letterer Jim Campbell combine to make the book such an immersive sensory experience. McGee’s exceptional use of motion lines, starbursts and other visual effects give the art a fluid quality that almost makes it feel like you’re watching a series of gifs. The illustrations practically vibrate with intensity. Similarly, Campbell’s extraordinary letters not only provide the steady, visceral soundtrack referenced above, they also help you feel the percussive force of every ball as it strikes its target or whizzes by someone’s head, throwing you into the action. Meanwhile, McGee’s expert paneling reinforces the narrative’s furious pace. On page after page, her off-kilter panel borders barely contain the action as balls fly this way and that, intermittently interrupted by the occasional inset panel that zooms in to a certain character’s facial reaction, unequivocally showing their heat-of-the-moment emotions.

Ultimately, “Dodge City” #2 continues the momentum established in the premiere issue, driving the narrative forward at a pace befitting the subject matter. It’s not a leisurely read, but that’s a good thing. This is dodge ball, after all, not croquet or chess. Trujillo’s script is both tight and efficient, and McGee’s illustrations are right there with him, a figurative and literal blur of rubber balls and bodies. At the same time, in the rare quiet moments—or even in the thick of the action—Trujillo adeptly allows his characters to fully be themselves. And damn, they’re some likeable misfits.

Who know where this story will go, but with this intriguing cast of characters and the interesting lives that they lead on and off the court, the possibilities seem endless.

Final Verdict: 8.2 The quirky ensemble cast is the main attraction in this sports Manga inspired story, bolstered by energetic artwork and a well paced script that uses familiar tropes as a basis for further exploration.