In the past two years, a recurring creative team has followed a story through the world of Thedas, that of BioWare’s Dragon Age, by way of miniseries. Follow them as, for 2020, they come back for the return of a face not seen since 2011’s Dragon Age II! 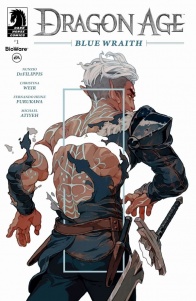 Fenris–the beloved character from Dragon Age II–makes his comics debut in this canonical continuation of BioWare’s dark fantasy epic! With the fanatical Qunari seeking to topple the Tevinter mageocracy, one powerful young mage’s desperate search for her father brings her face-to-face with a notorious mage hunter–Fenris, the Blue Wraith.

* Find out what Fenris has been up to since the incident in Kirkwall.

* Brought to you by the team behind both Dragon Age: Knight Errant and Dragon Age: Deception.

More than four years after the release of the latest video game installment to the Dragon Age multimedia franchise, BioWare has continued to release content regarding the world of Thedas through, among other avenues, comic book miniseries, including many from Dark Horse Comics. With “Dragon Age: Blue Wraith” #1, the creative team behind 2017’s “Dragon Age: Knight Errant” and 2018’s “Dragon Age: Deception” try their hand at another element from earlier in the canon. With a wide world of possibility before them and a far more central focus on pieces that are returning to the fore after a long absence from the games’ narrative, how does their latest foray into swords and sorcery fare?

Given the fact that Nunzio DeFilippis and Christina Weir work in tandem on this series, it is very difficult to see where one’s involvement begins and the other’s ends. As such, much like with “Knight Errant” and “Deception,” it seems prudent to simply address them together. Sadly, “Dragon Age: Blue Wraith” #1 seems to fall into the primary mistake of many a tie-in story: making it difficult to work the tale together as a standalone without simply designating it as a sequel to begin with. DeFilippis and Weir write in such a way that the interconnected trials and tribulations of Francesca and Fenris become a bit difficult for newcomers to actually understand a lot about the story, with the plot crafted so as to treat earlier miniseries as borderline required reading for comprehension of what exactly is going on.

The story of “Dragon Age: Blue Wraith” #1 does not entirely follow that of the eponymous Blue Wraith, Fenris, but has far more focus on the magocratic (magic-based government) noble Francesca Invidus, an amoral figure returning from “Deception” as she continues descending slowly toward immorality in her attempts to show her worth to her family. Much like earlier miniseries, rather than center in on elements that could potentially invalidate BioWare’s famous choice-based narrative, this one instead allows readers to witness the horrible world of Thedas from the perspective of other figures.

In which cases is power equitable to influence, and why? Where is a slave liberator seen as less benevolent in a harsh, unforgiving world of mage slayers in the aftermath of warfare? How can the traditional appeal of such things as beauty, power, friendship, and companionship be twisted until none of them seem to be anything more than mere words without a will to a specific action of one sort or another? All of these questions are asked through DeFilippis and Weir’s narration for Francesca, showcasing in depth how the dark fantasy perspectives of the Tevinter Imperium permeate many elements of Dragon Age itself. On their own, these statements would just seem to be rote “overly dark” commentary, but the inclusion of another perspective to bounce hers off against helps a great deal, demonstrating how such a point of view does not exist in a vacuum while also refraining from ignoring its potential for perversion into outright villainy.

Fernando Heinz Furukawa’s artwork is best suited to quiet, calmer scenarios, with his work on close-ups of facial expressions being particularly intriguing. He can show stoicism, irritation, or amusement quite easily by way of imagery with minimal background. Unfortunately, this excellence seems to move in an inverse relationship to the amount of events going on in any one scene. The more action is going on, from a battle to extreme speed of a run to a simple case of a heavily detailed background, the less readers can really focus in on individual people, with the art in some ways suffering from the sheer diversity of the panels themselves. At points with more minimal backgrounds, even with intense motion going on such as a tackle or a sequence of violent strikes, there is far better detail and ability for readers to appreciate the illustrations themselves, rather than Furukawa spreading himself too thin.

Where Furukawa may at times fail to keep detail, Michael Atiyeh shows his expertise with colors is more than prepared to make up the difference. Atiyeh’s palette, much like in his other work, is extremely diverse, bringing out the best in every curve of a pencil or thick line. His use of color helps to emphasize the different natures of the two interrelated storylines through “Dragon Age: Blue Wraith” #1. Blood flows out fresh and red from wounds in disgusting quantities in various instances of combat, making a veiny through-line from one side of the tale to the other. Dull and muted colors are shown in the perspective of Fenris, with exception of his famously glowing blue facial markings, to emphasize the simple nature of his crusade against Tevinter’s slaving practices. On the other hand, the veritable rainbow of hues and shades work their way through the events around Francesca Invidus’s troupe emphasize the greater moral complexities involved in her party and quest. Regardless of whether one follows one side or another, Atiyeh is more than capable of projecting the perfect tone for the story at hand.

Final Verdict: 6.5– “Dragon Age: Blue Wraith” #1 may be intriguing for longtime fans of Dragon Age, but aside from the excellent colors, the narrative is better for returning fans than it is inviting for anyone coming into the world of BioWare’s dark fantasy franchise fresh.