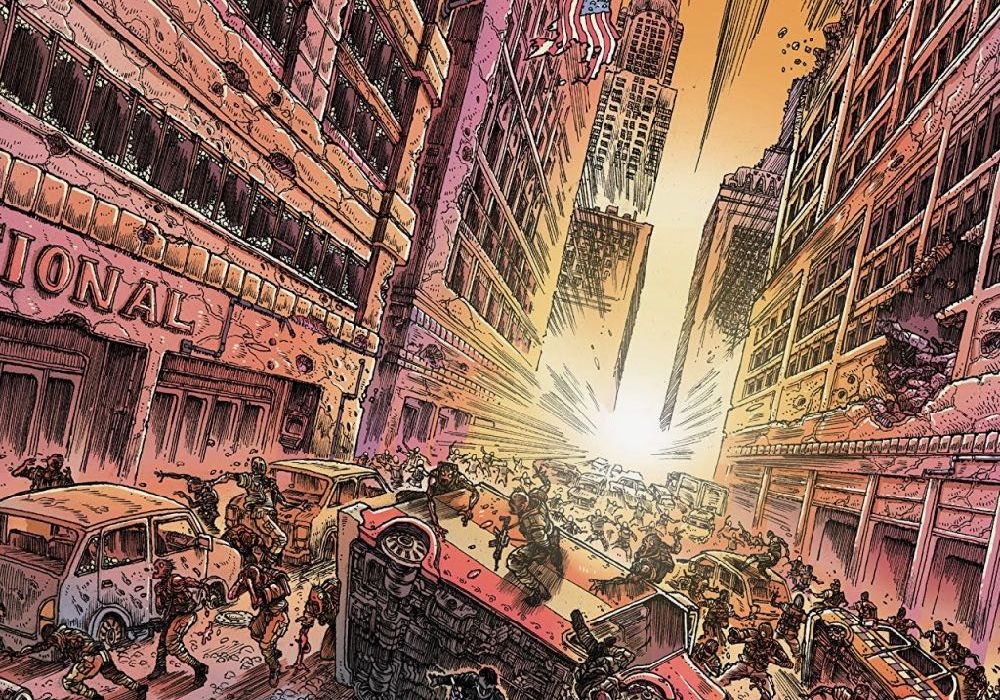 After a year long hiatus, “Eclipse” is back with a brand new arc. Was it worth the wait? Read on and judge for yourself, but beware of minor spoilers. 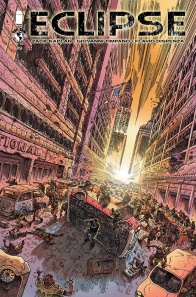 In a world where sunlight is deadly, former solar engineer David Baxter rushes to escape back into New York City before sunrise, while Cielo Brandt, daughter of a corrupt solar tycoon, searches for the mysterious Scientist responsible for an immunity to dangerous sunlight—a Scientist with his own plans in mind.

First off, if you’re not already familiar with the fundamental conceit of “Eclipse” (or somehow managed to forget it over the course of the preceding 12 months), it can be summarized succinctly like this: since a catastrophic solar flare a decade ago, anyone exposed to sunlight without the special protection of a refrigerated Iceman suit meets an instant, face-melting death. It’s a simple but harrowing premise. Sunlight is a killer; darkness and shadow are safety. In other words, it’s pretty much the exact opposite of what we’ve come to expect from life here on earth. Thus far, that alone has made the book pretty intriguing.

Add to this clever premise some familiar but serviceable tropes – a quasi-governmental cartel with a nefarious but vested interest in maintaining the status quo; a shadowy conspiracy amongst the moneyed elite that helps keep these bad actors in power; and a ragtag collection of rebels who seek to expose the system’s dark underbelly and bring all it crashing down – and you’ve got a solid blueprint for the kind of contemporary post-apocalyptic sci-fi series that manages to be equally entertaining and thought provoking. And like the very best of these series, “Eclipse” doesn’t begin and end with a mere high concept hook. Indeed, with consistently outstanding art, phenomenal colors, authentic dialogue and well rounded characters, “Eclipse” issues 1-8 succeeded on virtually every level.

So, the obvious question looms, is “Eclipse” #9 a mere continuation of what we’ve already seen or does it try to take things in a new direction?

The potentially unsatisfying answer appears to be, a little bit of both.

As in previous issues, Flavio Dispenza’s colors are stellar. Right on the very first page he unequivocally (re)establishes the notion that warm colors like yellow and orange portend death and destruction, while the blacks and deep grays of the shadows mean temporary respite from the sun’s deadly rays. Later, as iceman David Baxter and Dr. Valerie McHome stand awash in pre-dawn hues of blue, aquamarine and purple, a calmness infuses the scene. Until the deadly sun begins to break the horizon and the two of them must run for cover. The tension Dispenza creates with the color palette alone is simply astonishing. Nowhere is this more effective than in the book’s final scene when The Scientist reveals himself (silhouetted in a garage door) and proceeds to wreak total havoc with a pair of nail guns. It’s an utterly brilliant page.

Of course, Dispenza’s colors largely succeed because illustrator Giovanni Timpano’s inks, page layouts and paneling are so good to begin with. The paneling, in particular, is exceptional. Obviously, Timpano didn’t invent the technique of drawing characters that overlap panel borders to span multiple beats and moments, but he certainly uses it to wondrous effect. Aside from giving scenes a tangible 3-D quality, it adds fluidity as well, quickening the visual pace while adding a subtle layer of tension to key moments. Writer Zack Kaplan’s narrative structure is tight, but Timpano’s visual pacing takes it to a whole new level.

Speaking of Zack Kaplan’s story, in the first half of this issue there’s a definite shift away from series protagonist David Baxter’s point of view. Instead, we hear the interior monologue of The Scientist, the sole surviving albino immune to the sun’s deadly effects. As the last remaining hope for a cure, naturally he is sought by both the corrupt forces of those in power and those who seek to overthrow them. Morally, The Scientist himself is still on the fence. “I still have hope for this cure inside me,” he muses, “but I’ve lost all hope for this dark city.” Later in the book, this narrative viewpoint tends to fall away as Kaplan concentrates on “Bax” and the book’s other major character Cielo, rebel daughter of the corrupt “solar tycoon” Nick Brandt.

Similarly, for the most part Kaplan’s dialogue is brisk, understated and efficient, mirroring the visual pace and moving things forward swiftly. No doubt, the book is well written, allowing for the inclusion of new information without lessening the tension or bogging down in backstory. Ironically, despite the high concept premise and solid story structure, the visual elements here consistently outshine the script. Perhaps that’s the real testament to the power of Kaplan’s story. He gave his visual partners an array of great tools to work with and they’re definitely not holding back.

Final Verdict: 8.6 – With contrasting warm and cool colors that tell much of the story, paneling that’s damn near seamless and an understated but well structured script, “Eclipse” #9 is a great new chapter in an intriguing series.