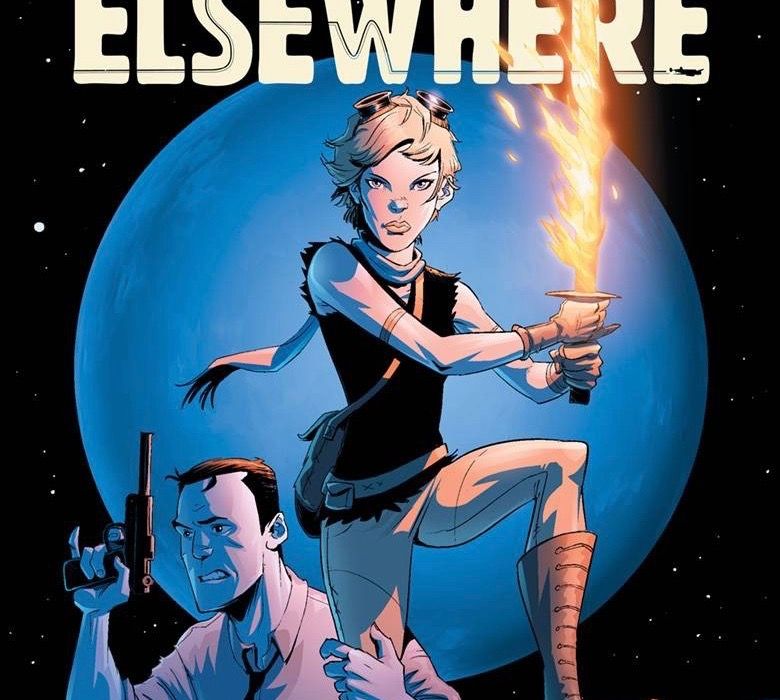 “Elsewhere” #7 ends with a compelling cliffhanger that seems to signal a whole new array of narrative possibilities. Potential plot twists aside, however, Sumeyye Kasgin’s art and Ron Riley’s colors continue to be the big draw in this consistently solid all ages adventure. (Warning: minor spoilers ahead.) 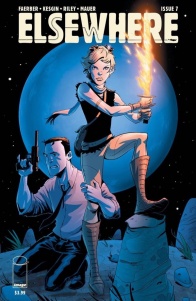 After suffering a massive setback, Amelia Earhart and D.B. Cooper push forward in their quest to reach the portal that will take them back to Earth.

Throughout its first six issues “Elsewhere” has maintained a fairly episodic vibe. You can pick up any issue and pretty much dive right in without having to know a whole lot about what’s happened so far or where things might be headed. Ironically, “Elsewhere” #7 begins in media res with Cort actually diving into the foamy sea to rescue Amelia, who is currently ensnared by the tentacles of a massive purple sea monster. And just like that, we’re off, thrown right back into the fray of this consistently captivating fantasy/sci-fi adventure.

That said, I should note right away that “Elsewhere” is clearly geared toward an all-ages/tween audience. If you’re a jaded comic book fan who burns through 20 floppies per month, you won’t see a whole here that’s particularly innovative or groundbreaking. In fact, you’ll probably bristle at the narrative’s reliance on some pretty well-worn tropes and stock character types. Namely, the unlikely alliance between the spunky, bright-eyed protagonist who just wants to get back home and her unlikely sidekick, a greedy mercenary with a heart of gold. Get past all of that, however, and it’s a very solid book.

The artwork, in particular, is consistently top notch. Sumeyye Kasgin’s style is breezy and highly efficient. With minimal shading and details, she distills scenes down to their essence, concentrating heavily on facial expressions. Scan any sequence of panels and the characters’ emotions are clear, allowing writer Jay Faerber to keep dialogue to a minimum. Consequently, the story just flows, moving swiftly from beat to beat without getting bogged down in the least.

Similarly, colorist Ron Riley’s palette’s a beautifully suited to Kasgin’s inks. This is a fantastical alien world and Kasgin keeps that fact center stage. Overall, this issue is heavy on blue and violet with accents of pink and rose, giving much of the book an otherworldly, twilit cast. The underwater scenes are a bit more monochromatic, but never muddy or dull, pierced by rays of white light and highlighted by bubbles. Later, near the end of the book, things shift toward warmer tones of yellow, light orange and brown, both signifying the passage of time and a definite change of environment as the characters find themselves in a barren, rocky valley littered with animal bones.

Narratively, as noted above, the pictures tell the story. Faerber’s dialogue is fine, but doesn’t offer any real subtext. Indeed, what you see is what you get. The dialogue supports the pictures and underscores their content. The characters say what they mean and mean what they say, without a whole lot of nuance or any subterfuge. Everything important unfolds right there on the page. No need for inferences or connecting the dots.

To be honest, the book’s simple, straightforward plot is a definite double-edged sword. If you’re looking for a quick, efficient, engaging read without any deeper meaning or social commentary, it can be a ton of fun. On the other hand, if you’re the kind of reader who’s well versed pop culture tropes and knows plot mechanics inside and out, it must feel predictable and a little bit lackluster. Ultimately, it’s a quick and compelling read from the opening scene to the last, but it’s not the kind of book that stays with you once you put it down. To me, all of this points back to who the book is for. Younger and middle grade readers will likely find this book and the series highly entertaining. Cynical, older teens, probably not so much.

In any case, the book’s foundation and execution remain rock solid. Take a notorious protagonist – who also happens to be the very embodiment of speculation and intrigue – and place her on an alien from which she must escape. Next, pair her up with a notorious criminal who is equal parts selfish and self-less, constantly torn between these two different ways of being. Then, wrap the whole package in some wonderfully realized art that is equally accessible and absorbing and you’ve got a winning combination for a sizable chunk of readers.

Now, seven issues in, an intriguing cliffhanger suggests that the characters are about to enter a whole new world, full of new possibilities and unforeseen adventures – exactly the kind of curveball that very well may take this series to a whole new level.

Final Verdict: 7.4 – “Elsewhere” #7 follows closely in the footsteps of the book’s preceding issues. Visually, it continues to shine. Narratively, it just chugs along. For the right audience, however, it’s sure to be a great deal of fun.