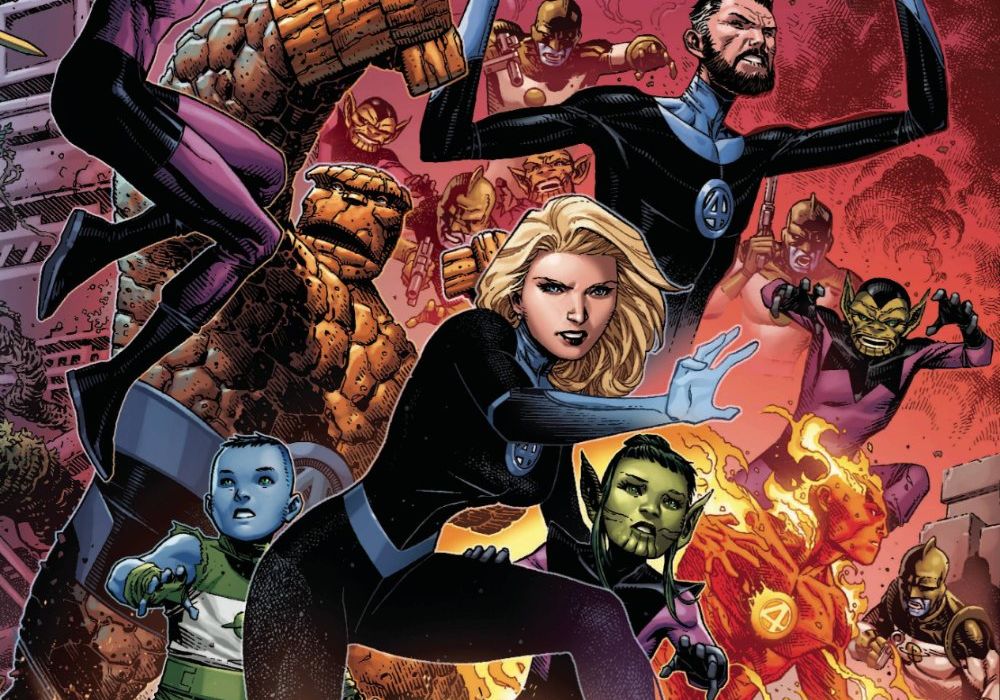 “Empyre” is at hand, but the heroes of the Marvel universe are only starting to learn of this. How does the Fantastic Four get involved, and what role will they play? We get to see their introduction to the new event in this tie-in issue, so let’s take a look and see how it goes with a few spoilers here and there. 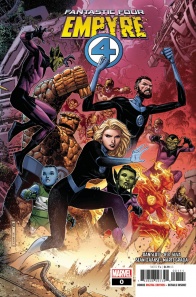 “The Last of the Kree/Skrull Warriors” – a pivotal issue, not just for EMPYRE, but for the future of the FF!

In the most unlikely of places, the Fantastic Four witness the final conflict of the Kree/Skrull War… and the fate of these final warriors will mark a stunning change in the lives of Marvel’s First Family for years to come.

All this, and the introduction of a long hidden Elder of the Universe… the Profiteer! Witness the first appearance of this new, major player in the cosmos!

One of the most important elements of a Fantastic Four comic is how the characters work together and off each other. Fortunately, Dan Slott has that down, giving each member of the team a chance to let their personalities shine through and bounce off one another.

As a good portion of “Empyre: Fantastic Four” takes place in a space casino, which presents great opportunities to get up to shenanigans. Extra credit must be given to Franklin and Valeria; while Valeria instantly sells the family’s spaceship to gamble using her omega-level intellect, it’s Franklin that bluffs their way into the casino, all with a Baby Yoda reference. It was a very amusing scene.

Since the Fantastic Four are our viewpoint characters, we learn about cosmic events as they do. This raises several questions for them, and us by extension. Sudden revelations like credits losing their value (not to mention the associated economic collapse) and the end of the Kree/Skrull War come as surprises to the team, so we’re brought along with them for the ride as they learn exactly what’s going on.

“Empyre: Fantastic Four” also calls back to the team’s history with the Kree/Skrull War, particularly their role in putting it on pause. The comic kindly refreshes readers’ memories on it early on, so its callback later on makes sense to even new readers. The way it’s worked into the resolution of the comic’s conflict works nicely, if a bit predictably once the action starts.

The solicit boasts of the introduction of the Profiteer, a new Universal Elder. While her role may have been one the Grandmaster could have taken before (in fact, she’s quick to point out that the Grandmaster is the previous owner of the casino), she’s given enough personality to make her distinct from her brother and serves as a nice antagonistic force, one motivated by greed.

Perhaps more important are the other characters introduced in this comic: Kree and Skrull warriors whose very selves are encoded with the history of their war. Seeing them fight to near death seems cool at first, since they have plenty of banter and well-illustrated combat, but it gets darker when we see how they’re constantly revived and repaired just to go into another clash. When we see how young they actually are, the atrocities of their gladiatorial arena really begin to sink in and we can root for the Fantastic Four to take action.

Once we get to know them a bit more, the new characters become more endearing. They’re warriors, yes, but also children, and their threats begin to sound more like children bickering. It’s a nicely done bit of character introduction. Given what we learn about them in this issue, it will be interesting to see what kind of role they play in “Empyre” overall.

While the main plot with the Fantastic Four finding the child soldiers of the Kree/Skrull War in the Profiteer’s casino is a decent story that drives the overall arc, the side plot with Franklin and Valeria in the casino is more entertaining overall. It’s fun seeing Valeria try to put her intellect to use against a casino, but seeing Sue’s reaction when she discovers it (and subsequent use of her powers to assist them) is even more amusing. The two plots are brought together nicely in the end, helping propel and resolve the issue’s story.

Visually, R.B. Silva and Sean Izaakse add a lot of visual style to the comic, especially with the color work by Marte Gracia and Marcio Menyz. The artists’ styles blend together well, so with a few small exceptions it remains consistent throughout the issue.

The real strong points come from the use of lighting, enhanced by the color work. The visual effects from seeing the two fighters shadowed by a field of red and orange flame is a great touch, but it also serves to mask their true ages from the Fantastic Four and readers. Similarly, the use of purple lighting in the casino adds a distinct style to the scenes with the children gambling.

Praise must also be given to an earlier scene, where the Fantastic Four are stranded in space. The space scenery looks gorgeous when we see the skies; there’s something fascinating about the subtle blend of colors in the cosmos.

Overall, “Empyre: Fantastic Four” #0 may not be anything that will blow us all away and reshape the Marvel universe, but it brings Marvel’s first family into the events of “Empyre” nicely and sets up some characters that may play a large role. If you’re the type who can’t miss a single part of an event, or just a longtime fan of the four, it’ll be worth your while.