“Fairlady” #4 is a good reminder that what a book is about and its central plot can often be two very different things. (Warning: may contain minor spoilers.) 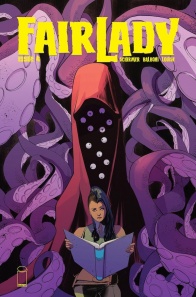 A client in an oversized cat mask hires Jenner for a very personal case… An avid reader, he’s frustrated that the mystery book he’s been reading is missing its final page. Initially, Jenner balks at the rather petty assignment—but then she sees how much he’s willing to pay. A Fairlady’s gotta eat.

Honestly, I wish more comics were episodic in nature, not strictly serialized. I mean, how many ongoing storylines can one reader keep track of in a given month? When I first saw the cover for “Fairlady” #1 way back in March, it immediately caught my eye. Muscular, bipedal, anthropomorphic cat, check. Strong female protagonist who looks like she doesn’t take any crap and could kick your ass in a heartbeat, check. Three-eyed roly-poly bear creatures, check. But all of that aside, the one thing that really caught my eye was the conspicuous graphic call-out: contains a complete Fairlady mystery! This could be the series I’ve been waiting for, a book that I can pick up from time to time, enjoy and set aside without having to fully commit.

Unfortunately for me, “Fairlady” #4 – the first book I read in the series – also happens to be the first issue not to include the character Oanu, the bad-ass cat creature known as a Jessu who was featured so prominently on the debut cover. Even without knowing a single thing about him, his absence nagged at me throughout the book. It felt like there was a void in the narrative structure. Without a sidekick or partner to chop it up with and crack wise, Jenner Faulds (the titular fairlady) becomes a solo act and that dynamic feels less complete than what it should be.

To be fair, Jenner Faulds is a great character who is easily capable of carrying an issue – or series – entirely on her own. She’s smart, funny, strong, self-deprecating and incredibly likable. In fact, her characterization and writer Brian Schirmer’s accompanying dialogue, are a definite highpoint. Jenner’s interior monologue that spans the first two pages, for example, efficiently and effectively sets the tone for the story while giving us great insight into Jenner’s personality. Offered a hefty payment by a mysterious client, Jenner responds drily, “Money is only half the reason I get out of bed in the morning.” Here, that quip isn’t merely a standard, throwaway line, it’s authentic and true, layered with an understated level of complexity that definitely hooks you in.

Ultimately, the plot is kind of silly, with appropriate twists and turns, false leads, dead-ends and intrigue. In the end, however, it’s a quintessential shaggy-dog story. So, if you came to the book looking for a tidy, self-contained mystery with a clear and fulfilling resolution, you may be disappointed.

As the solicit suggests, the plot centers on a quest for the missing final page of “a longform yarn called The Ogre Groaned at Sunrise by Abigail Nil Port,” a hilarious and intriguing title that immediately sparks follow-up questions. Regrettably, we don’t really get any further insight into the book beyond the fact that “there are hundreds of characters, and everyone has a motive.” I’m certainly not suggesting that “Fairlady” #4 should be nothing more than a story-within-a-story that retells the book in question, but at the same time it feels like a creative opportunity squandered. We simply have to accept the book is so compelling readers literally can’t put it down and so well constructed no one can figure it out. Some vague hints and glimpses into whether or not the book lives up to the hype would have done wonders to engage readers more fully in the unknown patron’s quirky fixation on knowing exactly what happened on the final page.

Visually, Claudia Balboni’s style works well with the story, even if some of her layouts, panel sequences and compositions feel pretty boilerplate. Nonetheless, her character designs feel fresh, with a mixture of looks that create a well-rounded ensemble. Similarly, colorist Marissa Louise does an excellent job of incorporating various skin tones to create a look that feels contemporary, dynamic and inclusive. Her sparing use of blue, or an occasional red or green, makes those colors really pop against the creamy gold patina that infuses most of the book.

Ironically, after finishing the fourth issue, I went back and read the previous three. Frankly, “Fairlady” #4 reads much better that way. Yes, each issue can be read as a self-contained, standalone story, but it won’t be the same “complete” experience without the additional context. In fact, in many ways the subtler, secondary narrative in this issue that centers on the relationship between Jenner and Nejla is more compelling and fulfilling that what the book is ostensibly about. And without additional context all of that would remain a complete mystery.

Final Verdict: 7.1 Like the three issues before it, “Fairlady” #4 is sold as a complete, standalone story. Reading previous issues, however, will make this book a richer, more satisfying read.