What happens when you throw Mad Max into “4001AD?” You get “Fallen World.” So, why isn’t this working as much as it should? Minor spoilers ahead. 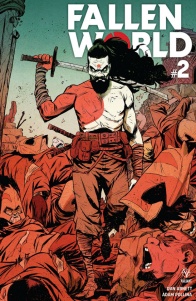 Get ready for the second thrilling chapter in Valiant’s explosive event series!

Rai’s creator and most dangerous foe has returned!

The cyborg samurai faces an impossible challenge. Can he stop his greatest enemy from gaining even more power? How many more positronic dinosaurs will have to die for Rai to save the future?

“Fallen World” #2 has, plain and simple, failed to keep my attention. There’s nothing inherently poor about any of the components within but, as I read, I found myself drifting, thinking about other stories, and putting the book down; for a regular sized comic book, that’s not good. Why this is, is hard to pin down, though. There is plenty of action, which drives the plot forwards and keeps everything moving at a brisk but not unmanageable pace. The politics are standard but kept to a minimum, focusing more on the Cult of Father aka The Fallen and Rai, Gilad, and the Geomancer of 4001AD, developing their motivations and taking the onus off of the new Bloodshot “My Only Goal is World Domination” Father.

Actually, that may be one of the reasons why “Fallen World” #2 fails to connect: the antagonists do not present a meaningful threat and, thus, there is a disconnect between the stakes as interpreted by the reader and the stakes as felt by the characters. Rai and company are devastated by the return of Father, now in Bloodshot’s body, but the focus is placed on Father’s upcoming desire to go on a fetch quest rather than on the emotional effect this revelation is having on Rai.

Moreover, the strain of leadership we saw in the previous issue, doesn’t seem to be coming through the narrative. It’s not dwelled on in any meaningful way nor is the story taking the time to slow down and let the characters drive the events rather than the other way around. Moving from set-piece to set-piece only works for so long and requires ever more elaborate and intricate set-ups, something “Fallen World” #2 just doesn’t have.

This doesn’t mean Pollina & Arreloa’s visuals don’t carry the necessary weight of the story, they absolutely do, but they aren’t going above and beyond in the ways necessary to compensate for the more standard narrative turns. Panels are mostly kept in close to the characters and when they’re not, it’s on pages that don’t let us get a sense of scale, flattening the viewpoint. This hinders attempts at conveying great mismatched odds, such as when Blood-Father starts spawning Blood Clones. It should be a moment of great anxiety for us on behalf of the characters. Instead, it feels like every other panel, albeit a bit larger.

Perhaps this is because the panels are quite busy. The readability and flow of panel aren’t affected by this but the added lines and bits and bobs that make it appear more “realistic” end up detracting from the greater whole. The restrained color palette, while varied and reflective of a specific vision of future fashion that livens up the world, does not help, as it must conform to the “realistic” nature of the story with shading to contour the art and the inability to push for more garish color choices.

The lettering fairs better as the mechanical nature of many of the captions is reflective of Rai’s own mechanical nature while the balloons are kept tight and spartan. I particularly like the design of Blood-Father’s blue balloons and the italicized font choice. It makes it seem like Father is forcing his voice through water, attacking the ears of the characters with its pointed nature.

But then there are moments that manage to break through and grab my attention. The conversation between Circadian and Raijin isn’t particularly interesting, filled with technical jargon and Circadian expositing about his evil plans, but the final panel of it is. It’s menacing, showing the threat that Raijin poses, despite having not done much so far. Pollina has us looking down at a close-up of him, allowing us to see every wrinkle of his shirt and every crack and joint in his face. His red eyes stare up at us, the outline of a pupil visible. The image seems stretched, too, making the shot feel bigger and wider.

The unfortunate thing about this panel is that the dialog does not support the image. It is too sterile and while both the visuals and the dialog are meant to complement and inform each other, I can’t see any reading of the panel, when combined with what comes before and after, that supports the more menacing and conniving reading. Perhaps the Raijin is being set up as the true villain to come but as it stands, this was just another moment of missed opportunity.

And it all begs the question, why did this story need to be told? What about the “4001AD” world needed a return of Father storyline? Does it add anything to the characters it explores? At the moment, no so until these questions are answered in a satisfactory way, “Fallen World” is going to continue to feel like an extraneous tale that didn’t need to be told.

Final Score: 5.1 – “Fallen World” #2 continues the standard narrative without much flair and, while it feels entirely extraneous, has enough moments of interest to make me reach the end.