Delve into a tale about fiction with a well-written, yet unlikable “hero” in the eponymous Fearscape. 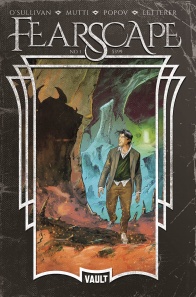 The Fearscape is a world beyond our own, populated by manifestations of our worst fears. Once per generation, The Muse travels to Earth, discovers our greatest Storyteller, and takes them with her to the Fearscape to battles these fear-creatures on our behalf. All has been well for eons, until The Muse encounters Henry Henry, a plagiarist with delusions of literary grandeur. Mistaking him for our greatest Storyteller, she ushers him into the Fearscape. Doom follows.

Under Ryan O’Sullivan’s pen, a vast majority of “Fearscape” #1 is an exercise in atypical storytelling. Our protagonist, Henry Henry (hereafter just called Henry), is an aspiring author, albeit one without a book to his name. As such, with the protagonist simultaneously being the narrator, O’Sullivan writes and rewrites, edits and excises, in real time during the course of the issue, with the unreliability of Henry’s narration being one of the key features, causing readers to think poorly of Henry himself instead of O’Sullivan due to the very nature of the narration.

The unreliability of the narrator works its way into nearly every aspect of O’Sullivan’s writing. With one breath, Henry might extol the virtues of someone he is introducing, while another he will instead deride how bad they are at their job if they make a comment against him. If he ever performs an act that is less than moral, from plagiarism to theft, he uses his internal monologue to explain away how it is someone’s fault, while the situation itself makes absolutely clear that that is nothing but a self-serving lie. Word choice drifts back and forth across time, from modern verbiage to archaic choices and back again depending on his focus. Acts of violence are entirely glossed over, skipped over intentionally with blank panels, as a way to indicate a lack of desire to delve into the violent aspects of literature, and the final pages are intentionally against expectation for the sake of being against expectation, rather than to actually prove a point.

One way to describe Henry is “artistically pretentious” to the point of being virtually completely unsympathetic, likely on purpose. Everything about his narration screams “notice how amazing I am at writing and how bad everyone else is at their own work,” from an internal monologue about how bad a writer his prolific genre author friend is to snide comments about how said friend’s daughter’s artist profession is one he considers to be oxymoronic, despite evidently not being very good at his own job of strict translation (in spite of his commentary to the contrary). Although he does have trouble with writing, his decision to “improve” upon translations rather than write them as desired (thus not strictly translating anymore) show that he thinks of his own work as definitively better than those he translates. The overblown narration, which encompasses far more of “Fearscape” #1 than dialogue, at times interrupts the story that readers may have wanted to see into, with O’Sullivan using meta fiction to irritate readers with the egotistical protagonist. His pretentions do also serve another purpose: they enable O’Sullivan to look in on classical literature for analogies, such as those to the works of Homer, Virgil, and Ovid, both showing the laughably overblown ego at work in the protagonist and educating readers at the same time.

Aside from Henry himself, O’Sullivan examines some of the fundamental aspects of the series and its eponymous realm. The idea of fears as physical objects, as things to be vanquished in story (such as the Muse’s story of Francesco Petrarch’s actions that caused the dawn of the Renaissance), is an intriguing one, and one that could potentially lead to rather interesting antagonists depending upon more modern fears than that of the medieval bubonic plague. Interestingly, this concept of looking in on fears and psychological trauma is not a stranger to O’Sullivan, in particular after his work on “The Evil Within: The Interlude,” so the phobia-centric dimension is right up his alley.

Andrea Mutti provides excellent artwork for “Fearscape” #1, with a smooth, almost impressionistic pencil that works its way across the scenery. The clean smoothness allows the darker lines of individuals to stand out all the more, helping to showcase how they inject their presence into the world around them, in contrast to the blurred ghosts of previous storytellers are blurred, literally and figuratively faded into the background. On the other hand, the smooth lines also are accompanied by deep shadows in the dark of night, showcasing how dreary the real world can really end up becoming for the characters, especially Henry himself.

Faces are key to “Fearscape” #1’s artwork, and Mutti definitely delivers. The smooth artistry allows for firm, realistic facial expressions, down to age lines and lack thereof depending on the person. While there is relatively little in the way of dialogue compared to narration, the facial expressions help sell what characters are thinking in ways that the monologues overlook.

Vladimir Popov provides two different styles of coloring depending upon whether the action is outside of the Fearscape or within it. For the land outside of the Fearscape, everything is in normal tones, from the yellow of a lamp, to a dark grey suit or navy jacket, to a green shirt, to the orange of the Tyger gang’s masks, and more. On the other hand, the Fearscape itself is more fanciful in Popov’s color choices, with hues ranging from a ash of purple, to brilliant, unnatural yellows of the Muse, to bright blues of passing spirits, to the disturbing reds and browns of the medieval fear of the plague.

In all, from the unlikable protagonist to the interesting storytelling style to beautiful artwork and colors, “Fearscape” is shaping up to be a very well done series going forward.