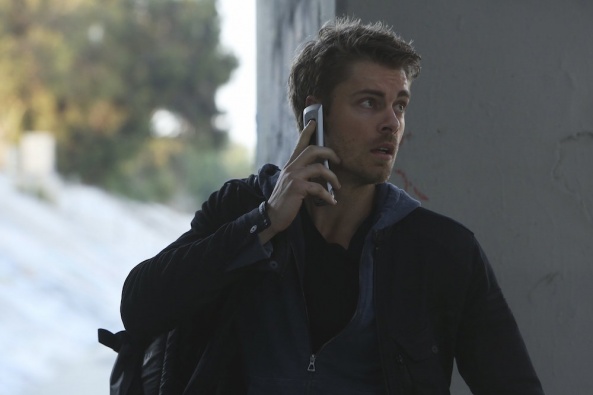 Back on track after missing the mark on the second episode of the third season, Agents of SHIELD gets back to the Inhumans story that we’re all mildly pretending to care about. Did you hear that Jessica Jones had its pilot shown at NYCC and was apparently amazing though? Almost makes you wish we could be reviewing something else.

1. Lincoln on the Run

Tonight’s episode was mainly about Lincoln, our leftover Inhuman from last season, on the run from the ATCU. This allowed for some interesting visuals as Lincoln used his powers (the opening sequence in particular), followed mostly by some last second drama as Lincoln failed the only person on the planet who still trusted him. I’m not entirely sure how I feel about Lincoln, to be honest; he was a good enough addition to the cast last season, but he was better as a side-player rather than a lead. Now that Lincoln is in the forefront of the Inhuman storyline, it will honestly probably depend on what happens with Lash to see if his continued inclusion is justified, as right now the character surviving past last season’s finale feels slightly forced. Not awful or intrusive, but, you know, if he never showed up again I’d probably be okay with it.

The more interesting portion of the episode last night was Hunter trying to infiltrate Hydra by joining a fight club. One thing I enjoyed last season was that SHIELD really stepped up the choreographed fight sequences; this makes sense for a Whedon show (even if that one Whedon’s not involved), as past shows with the Whedon name/brand have been quite entertaining from an action perspective. This one was pretty decent as well; May’s fight scene left a bit to be desired, but the intensity of Hunter’s was rather brutal. That, and I was actually surprised how dark it got — this show hasn’t shied away from being particularly bleak, but by the end of the episode things were pretty grim, at least with the amount of make-up being applied to Nick Blood (heh).

After spending (wasting) Jemma’s return storyline last week, this week spends a bit more time investigating the ramifications of her return. And when I say a “bit” more time, that’s all I mean; there’s really not a lot of time spent on it at all, and just enough to get the point across — including the stinger, which again feels like it was rushed. I’m all for Jemma to be back on the show, but after the surprising and shocking nature of Jemma’s abduction last finale it’s a shame they’re wasting the storyline so quickly. Perhaps there’s a reason to rush this storyline, but for a show that has been mired with pacing issues it really is a shame that the show hasn’t found a nice balance for all its moving pieces yet.

The show has dealt a lot with the aspect of the team being fractured and not trusting each other anymore, but one thing that I found interesting about last night’s episode is how quickly Daisy seemed to forgive Coulson. I suppose “seemed” is the operative word there; while Daisy is clearly pissed off at him, it doesn’t seem like she’s really all too bothered about what happened with Lincoln in the long run. And sure, she obviously has feelings for him, and as a character she’s never been very good at balancing feelings with what she’s doing for her job, but all things considered the moment where she realized Coulson had let her down seemed to come and go. Granted, this is pretty much something they’ve tackled in the past so it probably doesn’t need to be retreaded, but with everyone being on bad terms anyway I’d be curious to see how Daisy interacts with Roz when their relationship becomes more prominent.

As the episode ends, SHIELD teams up with the ATCU — and I have to admit, I’m relieved. Don’t get me wrong, I’m all for Coulson and Roz battling it out, and I’m sure we’re still going to see more of this come up through the season. But, for a show that doesn’t seem to be aware of its faults very often, they put it all out on the line in last night’s episode: they’ve done this storyline to death at this point, at least three times. Calling that out and then figuring out a new angle to do the same damn story again? It’s easy to see what they’re trying to do, but hey, points for at least trying to put a new rim on an old hat. I’m interested to see more of Roz, and I’m interested to see how Coulson deals with a clearly unhappy SHIELD team coming under orders of the government again.

If nothing else, it makes the existence of the Secret Warriors pretty necessary.

Season six comes to a close with a double episode! Like last season, there’s too much to cover in just five thoughts, so you get a full eight. Who will live? What will change? And how will all these plot points come to a close? Read on and find out.1. What is Real?At the end […]

Five Thoughts on Agents of S.H.I.E.L.D.’s “From the Ashes”

Well, we’re certainly starting to get some answers now. Sarge is unlocking his true self, Izel is about to open a gateway to her home plane, and… actually, that about sums it up. So let’s take a look at the latest episode and see where this is heading.1. Remember Me…As we saw last episode, some […]

The two-parter “Collision Course” seemingly ended with both Izel and Sarge dead, one having exploded in her ship, the other shot dead by May. But come on, did anyone believe for a second that their deaths would take not even a dozen episodes in? Fortunately, all is more or less explained in episode 10: “Leap.”1. […]