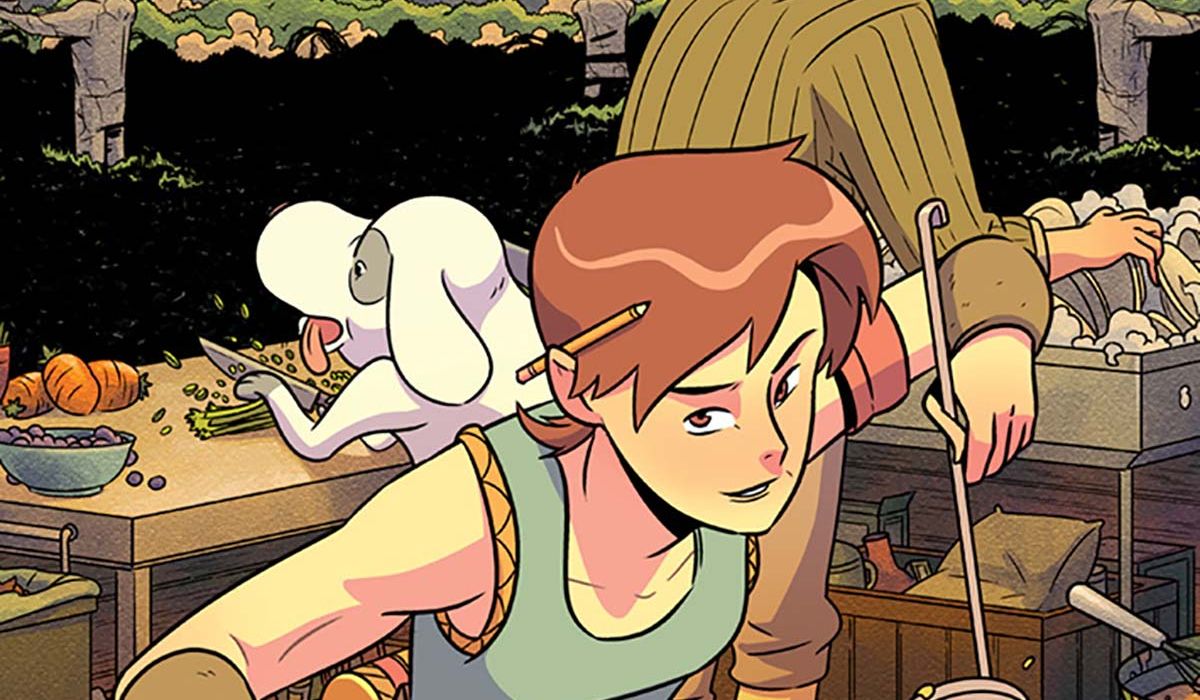 A young chef struggles to provide for her family’s restaurant as a mysterious threat lurks outside the city’s walls. If you’re craving a new food comic that aims to rival the likes of a Studio Ghibli feature, then “Flavor” will deliver. Our review will contain minor spoilers. 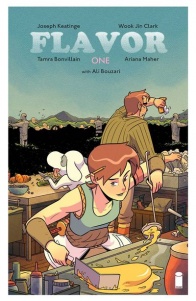 Within a strange walled city, an unlicensed chef discovers a mystery that threatens to end it all. Join JOSEPH KEATINGE (GLORY, SHUTTER) and WOOK JIN CLARK (Adventure Time: The Flip Side) on this culinary epic adventure—FLAVOR—where chefs are the ultimate celebrity and food is the most valued commodity. The high-stakes competition of Hunger Games collides with the lush, MIYAZAKI-esque worldbuilding in this delectable new ongoing series featuring culinary consulting and bonus content by ALI BOUZARI, renowned food scientist and author of the IACP Award-winning cookbook Ingredient: Unveiling the Essential Elements of Food.

“Miyazaki-inspired fantasy” is a term that gets thrown around a lot in comics. However, that comparison to the great master of animated storytelling is especially adept with “Flavor.” The magical world brought about by Joseph Keatinge and Wook Jin Clark truly captures the sense of wonder and limitless possibilities presented in Miyazaki’s films. The exacting attention to detail, a young protagonist, a fantastical setting, and an anthropomorphic animal — all the elements are there. It also doesn’t hurt that Clark’s illustrations are a dead ringer for Stuido Ghibli’s house style.

The comic opens on a bustling bazaar as Xoo races to catch a supply train loaded with rare Garuda truffles. Her quasi-anthropomorphic dog, Buster, joins her on this culinary quest, pitting them against the rest of the city’s chefs. The opening sequence is great fun, introducing readers to a world where food reigns supreme. Food penetrates every aspect of society within this walled city. In addition to its obvious culinary use, chili peppers are used for combat or as a fire accelerant for trains. Knights hint at a complex set of laws and statutes governing the proper use of food for combat purposes. We’re only given a taste—pardon the pun—of the culinary creativity “Flavor” is sure to bring as the series progresses.

The tone and general feel of “Flavor” is due to Tamra Bonvillain’s exquisite color work. Dusty umber and ochre overlays the town, generating the color equivalent of comfort food: warm and inviting. Xoo’s home interior also feels cozy with warmth, radiating the feeling of resting upon a fireplace’s outer hearth. The summery color palette emanates a general feeling of positivity and cheer. Once night falls, however, a purple darkness hints at the sinister elements on the story’s periphery. Color is also used cinematically during the ending credits. Once “Image Comics Presents…” appears, each credit is contained within its own panel with a single color overlaying it. This is juxtaposed with a rather sinister event, making the final pages a stylistic way to properly introduce the comic.

Wook Jin Clark clearly takes inspiration from Miyazaki and Studio Ghibli films. His characters are expressive and animated with a manga-influenced sheen. Clark brings the city to life from the first splash page, peppering the streets with citizens going about their daily lives. Backgrounds are lush with detail: vendors sling bowls of noodles and potential customers rifle through sacks of produce. The walled city itself is an architectural marvel, containing various tiers, an arcing garden, and a train station. The paneling is fairly conventional with occasional, subtle changes that break the mold. A diagonal panel border accompanies the slice of a sword and panels fracture in the chaos of a chef stampede. Two full bleed splash pages open and close the issue, giving it a satisfying symmetry. Overall, “Flavor” achieves the feel of an animated film so closely, you can practically hear the melodic instrumental soundtrack in the background.

“Flavor” is the latest in a long line of food comics (“Hungry Ghosts,” “Get Jiro,” “Space Battle Lunchtime,” “Umami”), a rapidly growing sub-genre with many recent installments in American comic stands. However, “Flavor” may be the first to feature a culinary consultant, a seemingly ludicrous title to be found in the credits of a comic book. Ali Bouzari’s role as a culinary consultant is further explained in the comic’s bonus material, an enlightening interview between him and Keatinge. They discuss creating a world based on “interesting food physics” and how food conveys character. However, many of the insights gleaned from the interview don’t make it into the first issue itself, though it’s promised future issues will delve into more food-focused storytelling. As of now, “Flavor” provides lighthearted fare with a darker final course to come.

Final Verdict: 8.3 – A fantastic appetizer from a new culinary comic, “Flavor” #1 delivers gorgeous visuals and a lighthearted story that mirror the best of Miyazaki’s animated films.