A few years ago, my pal Chad Bowers recommended I read “Freddie and Me” by Mike Dawson, knowing my love of music and, specifically, Queen. Now, Queen is not my favorite band, but for a few years in grade school, I thought they were the greatest band to ever live. Mike Dawson felt that way, too, and possibly still does. His book is more than just a fan letter, however; it is a look back on the things that matter to you when you’re young, how your relationship to those things change, and what, ultimately, matters in the end. 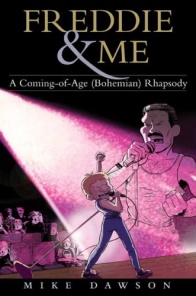 All of us have had that one band with which we identify, the band that was always there for us during good times and bad. For Mike Dawson it’s always been Queen and Freddie Mercury. Not unlike “Bohemian Rhapsody,” Freddie & Me takes readers on a rock-opera-like journey―from Mike’s childhood in the UK, through high school in New Jersey, and into the nineties, when grunge ruled the day and Queen was terminally uncool. As Mike works to navigate the trials and tribulations that accompany the road to adulthood (with Queen behind him every step of the way), he must grapple with the fears we all find ourselves facing: committing to one person for the rest of our lives, pursuing our dream job, coming to terms with our familial responsibilities, and even facing our own mortality. With humor, sensitivity, and some wonderfully imagined appearances by Freddie Mercury, Brian May, George Michael, and Andrew Ridgeley (among others), Freddie & Me is a touching reminder of how our favorite music is the soundtrack for so many of our most important memories and moments. And how one note can bring them all flooding back.

I am of two minds when I look back on something from my past. On one hand, I love revisiting memories or moments from my life, especially when they involve events, people, or places that no longer exist. I cherish certain memories from an almost archaeological point of view. As a songwriter, I sometimes will sit down with a pen and paper and try to mine every detail from a memory, and then find inspiration for a song in there. It is one of my favorite writing prompts I do.

But on the other hand, nostalgia is dangerous, and can prevent us from ever really moving on/forward in life. We all have that friend that we enjoy seeing, but after 15 minutes, it’s all “hey, remember that time when…” That’s not something to look forward to, and when I feel myself leaning too heavily into nostalgia, I worry that my whole life becomes that type of moment.

I think part of that is the reason that “Freddie and Me” has sat on my shelf for the better part of three years now. While the idea was appealing to me, the idea of someone simply recounting their fandom didn’t really get my juices flowing. Thankfully, I decided to pick it up last month, and was incredibly thankful that I did, because the book is not at all what I expected it to be.

More than anything else, the book is about Dawson tracking his path to adulthood, starting as a small child in England, moving to New Jersey, pursuing a career in art, meeting his wife, etc, and how a tether through all of that was his Queen fandom. And he wasn’t just a casual fan of Queen, it was one of his more defining characteristics as a young man. He was the type of fan that casual friends in high school would stop to say they were sorry when Freddie Mercury died.

And while I was never that kid for Queen, I was that kid for a number of artist over the course of my life: the Beatles, Aerosmith, Primus, Weezer, Pixies – when I fall in love with a band, I tend to fall hard. I saw so much of myself in teenage Dawson that it was sometimes alarming. It is almost hard for me to give a critical reading of this book, because so much of it felt so personally connected to me that I have a hard time separating my experience reading it from the text itself.

One of the things that surprised me the most in the book was how the story of him making the book bled into the work itself. He talks about showing pages to his family, and makes that a part of the story, long before he reaches that point in his own story, almost like an interlude. Eventually, cartooning becomes his ‘new’ Queen, and we see the two dovetail nicely, both in the text and metatextually.

My personal favorite part of the book has almost nothing to do with Queen, but is all about the power of memory. Dawson describes how certain moments in his life have been reduced to snapshots; when he thinks of certain events, the only memory he has is a single image that lives on. As a visual artist, he is able to reproduce these moments with some accuracy, which is something I am envious of, as I have a similar way of remembering events (Note: I also remember dreams this way). It isn’t quite a single image, but rather a few seconds that I recall with near-perfect clarity, while the other details are almost like the metadata within that video clip. It’s something I’ve never been able to articulate before, but Dawson’s description comes pretty damn close. It was invigorating to read that section.

Dawnson’s art style is an interesting fit to the subject matter. For a book about Queen, he doesn’t really draw the band all that frequently, and when he does, he is far more concerned about nailing the essence of the band (John Deacon’s posture while playing bass, Freddie Mercury’s ‘can’t take your eyes off him’ magnetism, Brian May’s hair) than he is about making a perfect photo-realistic take on the band. Remember, Dawson is drawing his memories more than telling a story, so it makes sense that everything would be slightly different than how it actually looked, though I don’t think he was intentionally obscuring details.

His style throughout the book is deceptively simple, telling his story in a more or less straightforward way, letting his stories unfold, relatively unadorned, throughout the book. He comments that he feels that comics are at their best when they are autobiographical, and that leads to his work feeling less like a comic that is intended to stun visually, and rather be one that wants to tell a personal story. It helps that his work is emotive and gushing forth with personality, so the straightforward layouts don’t feel rote.

However, when he begins to get into cartooning, you see certain passages take on a more fantastical approach. Again, this is the sprouting of his creative mind, and so when he talks about the comics he is drawing, the book takes on a more experimental tone. The double page spread that acts as the featured image for this story is a great example of that. Dawson is working on a project for school, a graphic telling of “Bohemian Rhapsody,” and this page represents the climax of that story. Instead of a suburban high school, we see the character dressed like Mercury, surrounded by flames, admonishing those judging him. The juxtaposition works well.

Dawson writes a lot about his family, and each member gets enough time that you get a true sense of who they are, but none more so than his sister, Sarah. Initially, their relationship is antagonistic – she loves Wham!, he loves Queen, and never the twain shall meet. But as the book goes on, their relationship grows, not in simple, sappy ways, but you begin to see their relationship inch closer and closer together. In fact, George Michael plays a relatively important role in the story, beyond just being a childhood obsession and a performer at the Freddie Mercury Tribute Concert. 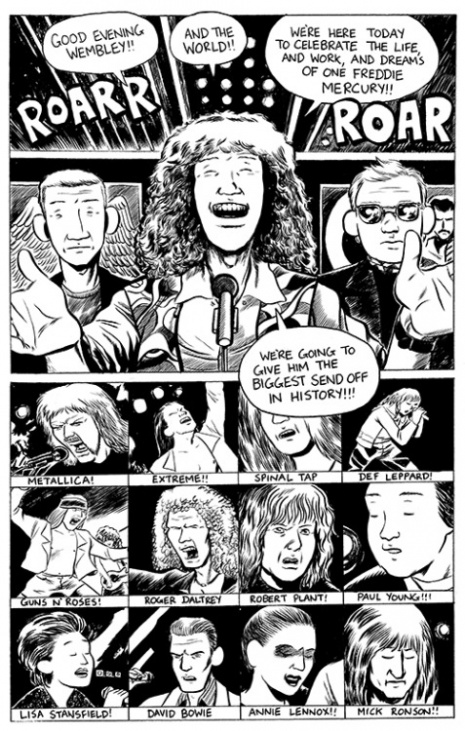 There are a number of moments in the book when Dawson imagines conversations involving Michael, whether it is the end of Wham!, or the aforementioned tribute concert, Michael keeps popping up, including a very touching appearance in the book’s epilogue. Michael, perhaps compared only to Mercury himself, comes off as a more grounded figure, despite being one of the biggest stars in the world. Perhaps this is just the product of the book being written by Mike and not Sarah; if she were writing it, perhaps he would be a larger than life personality, too.

Overall, the book presents a really fascinating look at family, music, memory, and the places that all three intersect. Dawson does a remarkable job of making his family and friends fully-fleshed out people, with imperfections and wonderful traits living side by side. He’s honest with himself, both his failures (his ‘metal’ band) and his successes (his eventual career), and the book overall feels like a really successful attempt to map out adolescence without bogging it down in the maudlin or the overtly sentimental.

And Queen, though a constant presence through marriage, death, intercontinental moves, never trumps Dawson’s own life as the primary focal point of this graphic memoir. And yet, there is a comfort in knowing that sometimes, when life spins out of control, we have tethers to grab onto. Some of those are friends and family, some of those are “Mustafa” or “Don’t Try Suicide.” And both are wonderful; thank goodness we have both.