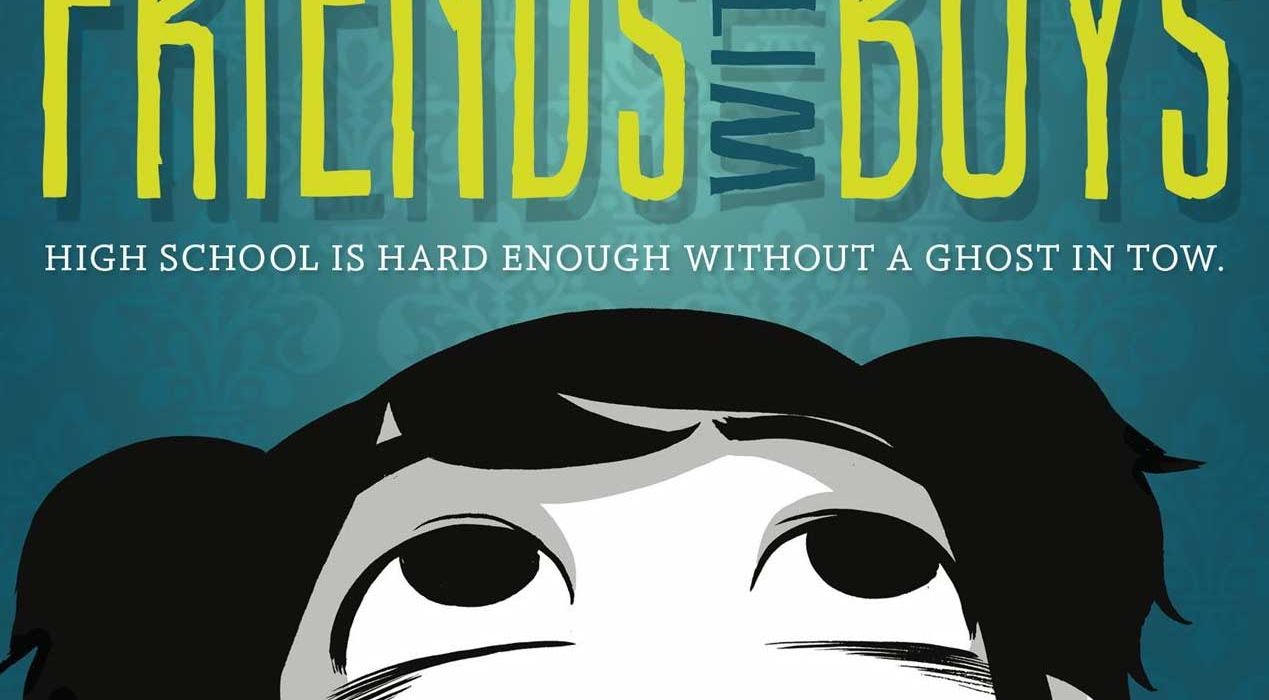 Faith Erin Hicks’s “Friends with Boys” continues to enchant years after its original release. The comic first appeared serialized online from mid 2011 to early 2012, before getting a book release from First Second. And personally, I think it stands among the very best books they’ve published. 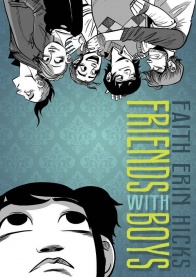 Maggie McKay hardly knows what to do with herself. After an idyllic childhood of homeschooling with her mother and rough-housing with her older brothers, it’s time for Maggie to face the outside world, all on her own. But that means facing high school first. And it also means solving the mystery of the melancholy ghost who has silently followed Maggie throughout her entire life. Maybe it even means making a new friend—one who isn’t one of her brothers.

I hold a special place in my heart (and on my bookshelf) for the books through which I discover a favorite writer or artist. In the case of “Friends with Boys” it led me to a creator that is both writer and artist: Faith Erin Hicks.

I’ve only read “Friends with Boys” as a book, and the experience had such an effect on me that it’s difficult to imagine it as it originally appeared, as a webcomic—I devoured the book when I first read it, so the idea of stretching that experience out over eight months is truly unthinkable.

Hicks strikes a delicate balance with this story, being both optimistic and melancholy, and frequently switching back and forth between the two. She always takes the time to make sure every emotion is felt, even if it isn’t precisely articulated. I can tell you the exact moment the I was hooked: on the second and third pages, as Maggie McKay stands in front of her mirror, ready for her first day of high school, and with a smile on her face says, ‘First day.’ 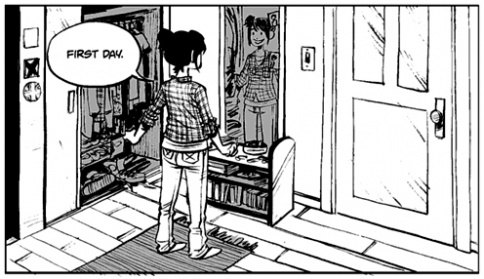 Then all that energy evaporates as a weight settles on her shoulders. She makes her way downstairs, passing pictures of her family on the walls. The first shows her family when Maggie was only a toddler, and everyone is smiling. The second shows a much more recent picture, and Maggie’s mother is conspicuously not smiling. 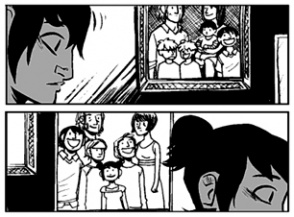 It’s also worth noting that all of this is setup with minimal dialog. Hicks’s visual storytelling is superb. Not too much further into the book, there’s a scene with the whole family at the breakfast table, and it’s busy and loud… and then one of Maggie’s brothers mentions their mother. On the page turn we look at the family at the table from a distance and we see what we didn’t see up close—there’s clearly an empty space at the table. 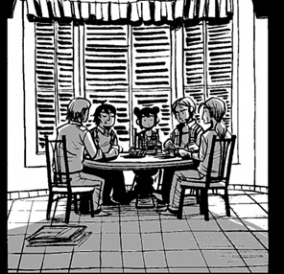 I love the way this was hidden in plain sight. I suppose we’ve all been trained by watching too many sitcoms not to notice the empty space at any table—the space through which the studio audience observes the actors. But when Hicks draws attention to the space at the McKay table, it’s so obvious, and suddenly you get that feeling that everyone at the table had felt the presence of that space from the beginning of the scene and were actively trying to push it from their minds.

Shortly after this sequence, Maggie heads off to school. Over the next several pages, we simply watch her put on her shoes and walk. We watch the way she crosses the road, skips over rocks, takes a shortcut through the graveyard.

I love this stuff. When you watch the way a character does the mundane things in their life, you get such a sense of who they are. Hayao Miyazaki does this in his films for Ghibli Studios; he slows down the plot and simply lets us watch the characters. In Spirited Away there’s a scene with Chihiro when she takes a train to Swamp Bottom. For the next three minutes, we simply observe Chihiro as she sits on the train, the loneliness and quiet desperation sinking in, but never enough break her determination. By lingering we really feel the depth of emotion in that scene. We’re forced to meditate on it.

And this is what Hicks does throughout her book. It’s not enough to simply say ‘this character is sad,’ so she gives us the page space to really feel it. My single favorite thing about this book is the pacing.

Boy, I’m making this sound really gloomy, aren’t I? Well, it’s not. Hicks is also gifted with an excellent sense of humor. This book always makes me laugh out loud at least once, and most of the time it’s because of one character (my favorite character): Lucy. Normally I’d put a picture of one of my favorite moments with her here, but she doesn’t actually show up in the book until page 48, and there are very few decent quality pictures of a definitive Lucy moment online.

Simply put, Lucy brims with enthusiasm, wears her heart on her sleeve, puts her foot in her mouth a lot, and is terrified of Alien (even if she may claim otherwise). Actually, on the topic of Alien, if you’ll indulge me going on a tangent, this book actually made me like the film more. Ellen Ripley is an awesome character, but through Maggie’s and Lucy’s eyes she’s even more so. She means so much to them, and by experiencing their reaction to her, it depended my own feelings about Ripley.

Even still, the moment was tempered by Alistair’s reaction… that Ripley looks good in her underwear. Alistair liked the movie just like Lucy and Maggie, but he didn’t have that same lightning-in-a-bottle experience they did, and he didn’t mean to, but his words dampened the whole mood of the scene. This is such a small moment in the book, but it’s very closely felt. And really the best part of this book is the cumulative effect of all these smaller moments. They’re what make the relationships between the characters live beyond the book’s 211 pages.

And this is why I return to the book so frequently. Reading about Maggie and Lucy is like visiting old friends.

OK, fair warning, I’m going to go ahead and spoil the ending now, so if you haven’t read the book yet, stop reading here.

The hook as disclosed on the inside cover is that Maggie is haunted by a ghost. The thing is, this isn’t really a ghost story. The real ghost Maggie is haunted by is the absence of her mother, and dealing with the inevitable changes of life going on and changing when Maggie just wants things to stay the way they were. 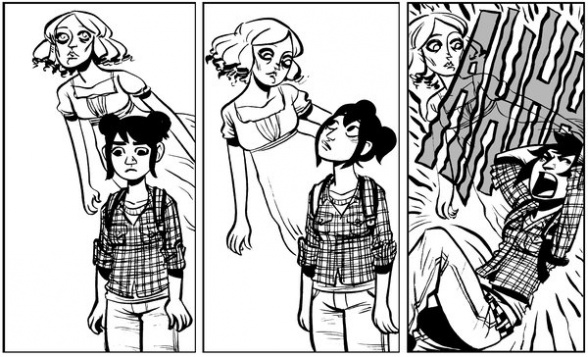 What I love about this ghost story is how utterly unresolved it is. Maggie can’t fix it, and at the end that melancholy ghost will continue to hang around. But there’s that little spark of optimism in the ending too, in that Maggie realizes her brothers are haunted by the same ghost. They are all dealing with their mother having left them, and while that’s sad, there’s something profoundly comforting in that they’re still there for each other.

Having the ghost act as a proxy for Maggie and her brothers’ emotional issues was an interesting way to deal with these themes without being weighed down by them. Through the ghost Hicks externalized something intangible. In the end, Maggie embraced the changes in her life and the new friends that came with it. And sure, it sounds corny to say it like that, but that’s the real power of this book: it never says this stuff, it just makes you feel it. There’s an honestness and an earnestness to it that’s irresistible.