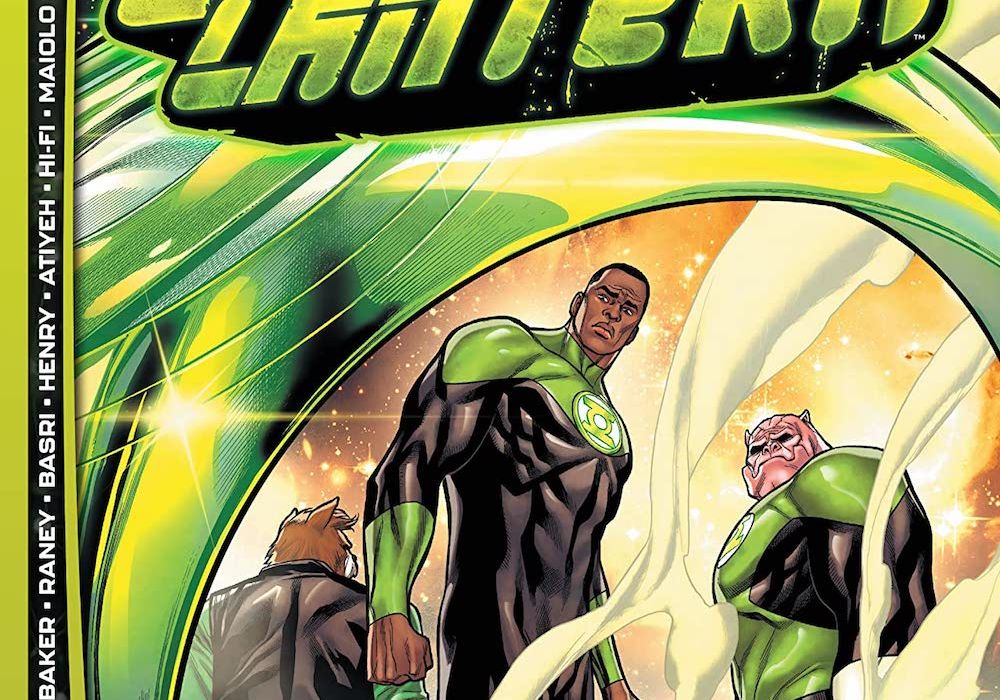 ‘Future State’ has been, as the name suggests, showing us what state the future of the DC universe is in. Well, it hasn’t exactly been a happy future in most of the books. In fact, in some places it’s just a few spider robots away from being ‘Future’s End’ 2.0. Maybe things will be better for the Green Lanterns?

Wait, did G’nort just tear a guy’s throat out with his teeth? Hoo-boy, here we go… 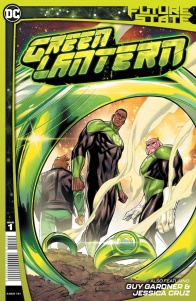 Assigned to map and contact new lifeforms past the 3,600 known sectors of space protected by the Green Lantern Corps, John Stewart and an elite team of Lanterns are trapped behind enemy lines and fighting for their lives when the Central Power Battery goes dark and leaves the entire corps defenseless. Meanwhile, across the cosmos, Green Lantern Jessica Cruz finds herself powerless and forced to battle the invading Yellow Lanterns of the Sinestro Corps, and Guy Gardner, trapped on a distant world, decides to reopen Warriors Bar.

“Future State: Green Lantern” drops us in to a future where the Green Lantern rings no longer function, but that doesn’t mean the Green Lantern Corps has given up. This issue shows us John Stewart and a handful of former Green Lanterns fighting to protect a planet against an invading alien force. Who are these aliens? Why are they invading? It doesn’t really matter, they mostly shout generic “Blood for the Blood God” style warcries as they attack in wave after wave of disposable bad guys.

Now, the comic does catch us up to speed quickly, even in the middle of battle. The communications between John and his team let us understand what they’re dealing with quickly enough and how they have no powers. Geoffrey Thorne knows how to balance the pacing between action and exposition, so readers aren’t lost in the middle of the battle.

Yet battle is basically all we get from this issue. They fight, more enemies come, they get overwhelmed, they keep fighting. Now, Tom Raney’s art style works well for the fight scenes – he manages to capture the chaos and claustrophobia of the characters getting overwhelmed well, and fits a lot of action into every panel. There’s intensity in every scene, and the changes to the character designs show us clearly how long they’ve been fighting and how well-equipped their unit isn’t.

Even G’nort’s redesign, in spite of how ridiculously it goes against everything we’ve seen from the character, turns him into a rabid hound-man who tears into his foes with tooth and claw.

Tom Raney’s art is gritty and detailed, as befitting the mood. Where it tends to fall short is in the character proportions and expressiveness. There are scenes where characters’ heads seem a little too large, or their arms a little too short. In other moments, a character is supposed to be shouting orders in a moment of intense panic, but her expression is more “slack-jawed blank stare” than “moment of terror.” There are some ups and downs to the artwork, but its strong points still come through.

It’s not a bad concept to see how the Green Lanterns can continue to operate without their rings, but if the answer is “they shoot and stab a lot of bad guys for 20 pages,” it’s not particularly interesting. Surely there are ways to show de-powered Lanterns using their wits, strategy, and non-construct-related skills to succeed, right?

Thankfully, that’s where the second story in “Future State: Green Lanterns” comes in. “The Taking of Sector 0123,” written by Ryan Cady and illustrated by Sami Basri, brings us back to the Lanterns’ base as the Sinestro Corps moves in to claim it. This story focuses on Jessica Cruz, and gives us a more thrilling story of one former Green Lantern’s struggle against the odds.

This section is exciting, giving us a balance between Jessica’s own internal monologue and looks at the Sinestro Corpsmen hunting her. We get to see exactly what tools she has at her disposal, and how she uses what she can to take down her ring-powered foes one by one. It’s engaging, but there’s also a sense of inevitability that leads to a conclusion that feels like both a victory and defeat at once.

Sami Basri’s art and Hi-Fi’s color work make this story the most visually impressive part of “Future State: Green Lantern.” Basri’s illustrations are clean and detailed, keeping the reader’s eyes focused on the most important part of each scene. With Hi-Fi’s color work, the visual aspects pop out of the page with bright, bold characters mixed with a darkened setting. The yellow light constructs we see the Sinestro Corps members use capture the personality of their wielders nicely, and they positively glow off the page.

Credit must also be given to the alien designs. While the Sinestro Corps members we see are not new characters, they’re good choices for this issue. One of them (Ugg-I) has teeth in place of eyes, and a giant eye in place of a mouth, which makes for a fittingly creepy look that Basri and Hi-Fi put to good use.

Finally, we see what Guy Gardner is up to during all of this. “Book of Guy,” written by Ernie Altbacker and illustrated by Clayton Henry, shows us what happens to Guy when he’s off-world as the Green Lantern rings go out of commission.

We don’t actually get to see what caused everything to shut down. There doesn’t appear to be an emergency that the Lanterns are called to address, so we see the mystery from Guy’s perspective. There is surprisingly little violence for a story about Guy Gardner, as it focuses more on his attempts to bring peace as he’s accidentally declared a prophet.

This is a story that leans more to the humorous side, with comedic bits like Guy’s struggle learning the alien language and the aliens who hang on to his every word taking his declarations about grape jelly to be gospel. At the same time, there’s a real sense of satisfaction as we see him grow into the role (as well as learn the language) and make actual progress towards peace.

Clayton Henry’s artwork is great for the close-up scenes, but tends to drop in detail when the characters are further away. So sometimes we get nicely shaded and expressive moments from Guy, other times his face is barely a mouth and dotted eyes. Of course, we can’t expect extreme detail in far-off pictures, and the art tends to be all-around solid more frequently than not. Another nice touch is how Guy’s character design changes over time, not just in how he grows older, but to reflect his changing attitude.

Other little touches, like the design of his new Warriors bar/temple, and how Guy’s holy robes include an image of clinking mugs, add a lot of character to the comic. The alien designs strike a nice balance between humanoid and non-human, maintaining expressiveness and large eyes to help us as readers connect with them.

Marcelo Maiolo’s color work also does wonders for this scene, giving us nice effects like the glow of the green ring constructs and the lighting from the alien sun. The colors are frequently subdued in this section, but they suit the atmosphere nicely.

“Future State: Green Lanterns” does not start off with the Green Lanterns in the best position. In fact, each one ends with an indication that things are about to get worse. This doesn’t make for a very inspiring future, but the three parts of the issue help us catch up with key Green Lanterns. While the core story is somewhat lacking, the issue makes up for it with the stories focusing on Jessica and Guy, and the artwork remains strong in each one.

Overall, “Future State: Green Lanterns” may not be the most memorable of Green Lantern stories, and in fact there is very little ring-slinging about. But if you want to see how the GLC is handling the events of “Future State,” you’ll at least want to give it a look (if just for the backup stories).

Final Verdict: 6.2 – “Future State” continues to show us yet another dark future, but there’s still some entertainment to be had in the Green Lantern stories. Unless you’re a G’nort fan.