There are some comics and intellectual properties forever linked to the creative team that forged them. “X-Statix” is one such series, but can the team of Milligan and the Allreds capture lightning again? Hint: they surely can! 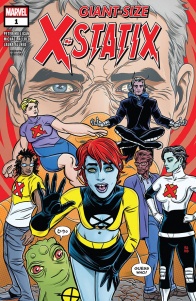 They’re back and more alive than ever for this special one-shot! But what new threat is so grave that only the most famous mutant celebrities can fight it? And who is the new U-Go-Girl? Only the original X-Statix creative team Peter Milligan, Michael Allred and Laura Allred know for sure!

“X-Satix” is a very peculiar mutant and Marvel series. Starting at first as a new iteration of “X-Force” when Joe Quesada (fresh on his EiC run) and Axel Alonso wanted to still a new voice to the team, moving away from the mutant militia angle. In come Peter Milligan, Mike Allred and Laura Allred, drastically changing the book’s mission statement to a deliberate satire on the pop culture of its time. With a name rebranding shortly after to “X-Statix,” that volume explored some of comic’s more absurd tropes (the back-to-life revolving door, among others), as well as the more ludicrous behaviours permeating cults of personality and media relevance.

It has been nearly 13 years since the last publication of a X-Statix series (the closest to it being the Dead-Girl mini with Doctor Strange back in 2006). This makes this new special all the more interesting, as it allows for a fresh re-examination of how media and comics changed during that time, which the creative team leverages to very good results.

Right off the bat, the artwork by Mike (linework) and Laura (colors) Allred is phenomenal as usual. “X-Statix” was known for its hyper-violence (and for not being shy to graphically flaunt it), and that trait is certainly honoured on this special. The more cartoony and brightly coloured style of the Allreds apparently clash with this more realistic approach to violence, but the manner that it is depicted actually reinforces it, rather than coming across as fake or ungrounded.

There is also a very intentional approach to page and panel design. There is no traditional grid to be found on “Giant-Size X-Statix” #1, with diagonals and ovals dominating the issue. Allred shifts between shapes to zoom in on the action and highlight specific objects or moments within the larger action. Facial expressions also follow the same vein of that hyper-violence: while still adhering to more exaggerated shapes, feelings are as obvious as complex for each of the team’s members, on either more intense or quieter moments. And let’s not forget the work of Nate Piekos on lettering, especially due to the migraine-inducing hieroglyphs that camera-man Doop uses to engage on conversation with his team members.

Back to Milligan’s exploration. There is a lot going on on this special, warranting its extra-sized (it stands at 36 pages) offering. Milligan does not shy away to hit the ground running, introducing brand new characters, following up on some of past X-Stqtix member’s legacies, and introducing brand new situations and villains. Sure, it does lose some of its substance when looked as a stand-alone one-shot (more on that towards the end of this review), but it feels so organic and deliberate that readers will probably go along for the ride.

The social satire is in full force, commenting on the current situation of reality-TV past media stars and how lacking their fandom is on today’s market, but it also expands to other forms of pop culture, be it the dwindling book publishing market, or the music and record album industry. Even more than that, “Giant-Size X-Statix” looks for ways to comment on the social changes that have transformed over the last decade-or-so, be it through the “Me Too” movement, the topics around plus-size modelling (and transforming and evolving beauty standards), and how racial and social tension remain at an all-times-high. Again, it reads at an intense pace, and it could feel a bit unwarranted at times (almost like a touch-and-done commentary), but it really paves the way for more to come.

For a bit more on the spoiler side… the very end of “Giant Size X-Statix” #1 reveals that a new series with these characters will launch next year, under the “X-Cellent” moniker (the same name of the villainous group introduced on this special). This surprise really alleviates the sensation that this one-shot did little beyond tease at some compelling angles and arguments, becoming more of an introductory menu of things to come. If only a few of these elements carry over, that will already be plentiful for a new irreverent series.

All in all, “Giant-Size X-Statix” does what a special for a long-dormant property should do: it reminds fans of why they loved the concept and characters, and bring readers unfamiliar to them up to speed. Beautifully crafted, with a clear passion from the creative team, this is one to watch.

Final Verdict: 8.0 – Fun, satirical, and timely, “Giant Size X-Statix” #1 brings back all the positive energy this series is known for, while setting the stage for more to come.