“Gideon Falls” is one of the best realised and executed comic in today’s market, pure and simple. From script to finished art, everything comes together beautifully, taking readers down the disturbing rabbit hole of its narrative. 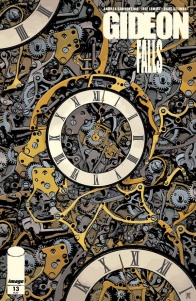 “STATIONS OF THE CROSS,” Part Two Father Burke’s hunt for The Laughing Man killer goes from the Old West to a steampunk version of Gideon Falls (complete with an otherworldly version of The Black Barn) where “The Bishop” is a new piece added to the cosmic chess board.

Since this series began, Jeff Lemire, Andrea Sorrentino, and the creative team have set out to deliver a horror story with such expert craft and attention, that it feels to readers they are discovering something, rather than reading it. That feeling is augmented on every page, by its inventive design, beautiful backgrounds, and haunting character’s facial expressions. With issue #13, “Gideon Falls” continues to push these boundaries, by mixing narrative genres and visual styles.

A lot of the success of “Gideon Falls” rests on the shoulders of Sorrentino and what seems to be an absolute free reign as to what the artist can do. It is not an exaggeration to say that Sorrentino is pushing how comics can be designed and laid out, in similar ways to what Eisner and Steranko did for their own generation. Pages – either double-spalhses, or more intimate panels – work like windows, pathways and vertigo-inducing sequences. And they do not rely on one specific tool or choice: at times, panels borders dissolve in the chimney smokes on ancient villages, on others they follow the rigidness of a totalitarian state-city.

Beyond page and panel design, Sorrentino also layers characters and backgrounds beautifully. The desperation observed on the faces of past victims of the Laughing Man, the sense of urgency on the looks of the series’s protagonist, the creepiness on the fixated look of the adversary. On this particular issue, “Gideon Falls” also travels to multiple dimensions, so backgrounds are detailed to provide a quick assessment of the nature of the place characters have traveled to, not to mention to set the tone of the corresponding story that usually happens in a place like that.

Dave Stewart is just as consistent on colors. Not only in terms of the quality of how the palette is applied, but especially on how it is used to reinforce the difference of each location and how close to a more frightening moment the narrative is approaching. Colours grow gradually darker and less vibrant as the Laughing Man nears.

Lemire, unsurprinsgly, continues to deliver on making the lore of “Gideon Falls” more and more compelling. If at first the story felt like a traditional horror story on a remote locale, more recent entries have expanded considerably the scope of what is going on. Now, the series feels almost like a sic-fi and horror mash-up, with overtones of fantasy. It obviously throws aside the trappings of any given genre and remains laser-focused on the feel of the book, and the importance of the characters motivations as a much stronger compass. “Gideon Falls” does remain, however, within the realm of the influence of horror master Stephen King: if at first it felt constrained to a Salem’s Lot aesthetics, it does now borrow from the magnum opus that is the Dark Tower series. With that said, leaning to such a valid master, and making it his own, is no small feat that does not reduce from the experience, but rather enhances it.

The plot on issue #13 is intentionally loose, pulling readers into a very fast-paced journey, making them as jaded and confused as the protagonists they are following. It is a very deliberate choice, leaving little room to discussion and meandering, forcing a common ground among the audience and the characters that make the overall product more engaging. Combined with a visual interpretation of these travels that is as unique as the story, “Gideon Falls” truly stand apart.

All in all, reading “Gideon Falls” is more like a visual experience than the standard comic fare. It pushes the boundaries of the stories and genres it wants to be based on, just as much as it pushes the limits of how pages and panel can be designed and presented. It is unafraid to abandon characters and plots for a while, just to return them to the spotlight for a stronger push. And it feels absolutely no need for exposition or explanation, trusting it’s reader’s intelligence and its own structure to tell everything it sets out to do.

Final Verdict: 9.2 – With such a well-aligned creative team, delivering some of their best work ever, “Gideon Falls” is a monthly joy. By trusting on its own quality and being unafraid of keep pushing the envelope, it delivers in a big way.

This April, Jeff Lemire and Tyler Crook will explore the weirdest corners of the “Black Hammer” universe in “Colonel Weird: Cosmagog.” The four-issue series will focus on the past, present, and future of “Black Hammer”‘s strangest hero, and tell readers what happened to Weird after the events of 2018’s “Black Hammer: Age of Doom” series.“Colonel […]

“Family Tree” #1 shows Jeff Lemire at the top of his game, unleashing a harrowing tale that in many ways feels familiar and highly relatable, yet proves to be unpredictable and wildly imaginative.Written by Jeff LemireIllustrated by Phil Hester andEric GapsturColored by Ryan CodyLettered by Steve WandsWhen an eight-year-old girl literally begins to transform into […]

There are a lot of comics out there, but some just stand out head and shoulders above the pack. With “Don’t Miss This” we want to spotlight those series we think need to be on your pull list. This week, Dark Horse Comics and DC Comics proudly present “Black Hammer/Justice League” #5, the finale to […]