Everyone says they want to be famous, but what actually happens when you do become famous, and at the expense of a mass murder? Teenager Kaydon Klay is about to find out. Will she be able to handle the pressure? The follow up to 2016’s “Glitterbomb” series starts a whole new story in the universe that is jump-on friendly for new readers, and the artwork really hammers home the question of: what price fame? 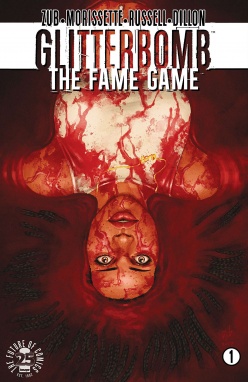 Sixteen-year-old Kaydon Klay wants to be famous (who doesn’t?) — but is about to find out that fame comes with a price. After her employer and friend, actress Farrah Durante, commits a nationally televised murder-suicide, Kaydon becomes the last person to see Farrah — and the person that everyone wants to speak to in order to make sense of what happened. From an agent who realizes he has the most powerful teenager in America on his payroll to the police who want to find the motive to the media who wants the most sensational lead on this story possible — Klay is in high demand, but still has to contend with parents, bullies, and algebra homework. It’s enough to make anyone lose control. Will Kayden fall prey to the same demons as her friend?

This new story from the”Glitterbomb” series focuses on a peripheral character in original protagonist Farrah Durante’s life, and is certainly jump-on friendly enough for new readers. A good debut in an existing universe will set up characters and plot easily enough for new readers to understand, but keep just enough of the familiar for the fans of the previous franchise. The choice of starting the story in the aftermath of tragedy works well for this reason; it’s an easy reference point for old and new readers. There’s an appropriate level of introduction for each character, with enough for you to understand the role they will play in Kaydon’s new life — her agent who already makes clear that he’s to be the most important person, her mother that just wants her baby girl safe, the cop who wants to get answers. As a new reader, I would have liked a little bit more backstory into Farrah — not a lot (she does have a whole other series devoted to her) but just enough for someone to understand what got us here. What demons led Farrah down the path of murder? How is her family reacting? Were there subtle clues that the reader may see that Kaydon may not have initially? All this is having an effect on this rather impressionable teen’s life, and we (the readers) know this will provide context for this plot. Of course, one can pick up on these things by reading the first arc (which I know I will be doing).  For the benefit of those who can’t or don’t want to read the original “Glitterbomb,” I do hope future issues of “The Fame Game” explore these questions from Kaydon’s perspective.

Morrisette-Phan’s art work on Kaydon illustrates her different facets beautifully; this is no cookie-cutter teenager. In a series of pages he is able to capture innocence and overwhelming fear through Kaydon’s wide eyes and slightly open mouth when meeting the media, a sly sense of purpose and realization of her newfound fame in a private moment with an Uber driver, frustration when talking to the police or dealing with school bullies, and the stress of it through a breakdown and tears in the girls’ bathroom. We don’t need words to understand the myriad of emotions in Kaydon’s head, it’s written all over her face. There’s subtle commentary in the artwork as well on the media as a single entity (instead of individual reporters); they’re drawn with very little detail and blend in to each other effortlessly. Detective Rahal looks every bit of a modern day take on Kojak (with more hair and less lollipops), and Mitch (Kaydon’s new agent) looks every bit the West Coast Dudebro in a fancy suit and slicked-back hair that never steps out of place.

Where this debut excels is in color and letters. Russell has a hand with making color the star of almost every scene. You can see the flashbulbs of photographers in the glow on Kaydon’s face when she first meets the media, flashes that also deliberately hide detail in the assorted media types looking to meet her (sending home the earlier point Morrisette-Phan makes in the drawing of the media as a collective rather than individuals), the fiery tones of torment in Detective Rahal’s PTSD of the event, the nondescript grey of Kaydon’s high school suggesting that it’s now the background place in her life. I also noticed a subtle choice of race with the high school kids – Kaydon and her friend Martina are women of color, whereas Conrad and the other bullies that tease them are white. I’m not sure if this is a deliberate decision to comment on the state of race relations in America 2017, but it did catch my eyes, and I am sure it caught the eyes of others. Will this race dynamic be explored in future issues? Marshall Dillon’s lettering continues artistic comment on media’s presence in our culture — the questions from reporters on Kaydon’s first meeting with them are light yellow circles (just like the flashbulbs) – and background dialogue from a TV renders in a light blue color (like the glow of the tv) in a nondescript shape, a graphic representation of a soundbyte. Dillon also chooses very creative panel layout, overlaying smaller panels on a larger full page panel to show plot movement and its aftermath.

I don’t often digest afterwords of comics I read, unless they have an angle that relates back to the story. It is fun to learn more about creators’ inspirations, but when you’ve seen one afterword like that, you’ve kind of seen them all. This is one of those rare comics where I found the afterword highly enlightening as it takes a dive into what a Hollywood agent’s job is. It’s fine context to help understand the story better, and I’ll certainly have a better understanding of Mitch the Agent as we explore his character.

Is fame all it’s really cracked up to be? “Glitterbomb: The Fame Game” may finally be able to answer that elusive question.

Final Verdict:  7.7 – A great debut for an existing franchise that keeps both new and existing readers intrigued, with strong art and letters to drive home deeper philosophical questions of the cost of fame.