The tale of a divine, foreign father and his boy is further expanded in Dark Horse Comics’s comic book prequel to Santa Monica Studios’s God of War. 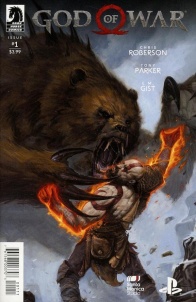 Kratos, God of War, has returned! His war on the gods of Olympus long past, Kratos builds a new life for himself in the remote Norse wilds. Seeking to put the rage that defined most of his life behind him, Kratos inadvertently sparks a feud with a mysterious cult of berserkers after attempting to save a stranger being mauled by a monstrous bear. But for the former Ghost of Sparta, no good deed goes unpunished.

• A brand-new story set in the world of Sony’s hit video game, God of War!

In terms of storytelling, the new God of War game released earlier in 2018 (technically the fourth numbered installment) was built with an eye toward not only evolving and adapting its eponymous god to a new era for returning fans of his earlier characterization, but also drawing in newcomers to the franchise at the same time with a story that does not require much, if any, foreknowledge. Chris Roberson follows this very concept himself in the writing of “God of War” #1, but applying a very similar approach to the games in general. Roberson’s writing does not require readers to be familiar with the source material of this tie-in comic, but provides some small bonuses for those who do know of either the games or Norse mythology itself.

Kratos’s conflict with his practically hard-coded rage is a major part of his character, especially in the 2018 video game, and Roberson pushes that conflict to the fore altogether in “God of War” #1. Despite the protagonist’s taciturn nature, Roberson uses his body language and the very particular words he does say to illustrate his internal struggles, from his disappointment with his son to his self-loathing.

Roberson gives a lot of room for people who are not familiar with the God of War franchise to latch on to the story of the Spartan god. Kratos’s problems with his son’s immaturity and lack of desire to help around the house, coupled with his battles against his very own divine temper, create a quiet, but not quite stoic, figure that is a simple enough characterization for a varied audience, but also complex enough to intrigue them as well. Even with a protagonist so far removed from his natural setting, both in time (by several hundred years) and in space (being in an entirely new culture), readers are able to sympathize with his struggles, including his failures, especially given his “fish out of water” approach to Midgard society.

Atreus, the aforementioned son (who is only named in the source material), provides some comedy and sadness both, showing the perspective of a young child who was born into the world of Norse culture as opposed to the warrior society of Sparta. While he is very emotional in his own way, showing open embarrassment, worry, curiosity, or depression in his posture or words, he acts as a deliberate foil to his father’s outward stoicism, albeit one who is completely aware of how disappointed the older man is in his lack of aid to their home.

Utilizing Old Norse runes, Roberson creates a language structure for the native people that can be very vaguely teased apart through close examination. Readers could possibly get a very basic understanding of a word or two of each sentence by a close watch of how the figures look similar to English letters, but not enough to truly understand, creating a kind of balance between Atreus’ multi-lingual nature and Kratos’ illiteracy in Old Norse.

Some of the more magical elements of the series also crop up, ranging from those from the 2018 game (trolls), to new ones. The ursine creatures in “God of War” #1, as seen on the cover, are not present in the games, but could possibly be inferred by those with enough knowledge of Scandinavian myths. However, Roberson leaves just enough mystery to lead readers forward into the next issue to figure things out.

Tony Parker’s artwork makes heavy use of perspective, especially with regards to Kratos himself. The most prominent use is the recurring “Kratos in the foreground, with a half-focus on the background he’s leaving behind” angle, which also extends to a wood axe he had chopped into a pile of firewood to be cut as an implication of he himself being there to watch the boy work. The other important note is the use of points with absolutely no background shown at all, as a way of demonstrating Kratos’s tunnel vision in combat, his utter focus under the control of his Spartan rage.

The figures in the story seem to come more into focus during battle. While they may sometimes be indistinct in relatively peaceful times between fights, Kratos and his enemies are drawn into a much higher level of definition in the middle of a fight, enabling Parker to draw an emphasis on Kratos’s absolutely brutal combat style, even without a single weapon to his name. Furthermore, the combat demonstrates the use of wild, crazed eyes on both Kratos and his foes, showing them to be, on some level, not so different from one another without needing a word.

Dan Jackson uses a varied color palette depending on the time period in which a scene is taking place. He uses a dimmer one for flashbacks or otherwise views of the far-off past to show that they are not important in the present, and much clearer, cleaner colors for the present day. Red is the most prominent, ranging from Kratos’s signature “Marked Warrior” tattoos and his bloody combat with a bear to a darker, slightly blurred red across snow for a wounded person. Some colors do not even fully meet the edges of the linework, showing a decreased focus of the narrative on those elements as Kratos himself stops caring about them.

Final Verdict: 8.0– Good for newcomers and perfect for returning fans, “God of War” is shaping up to be a treat.