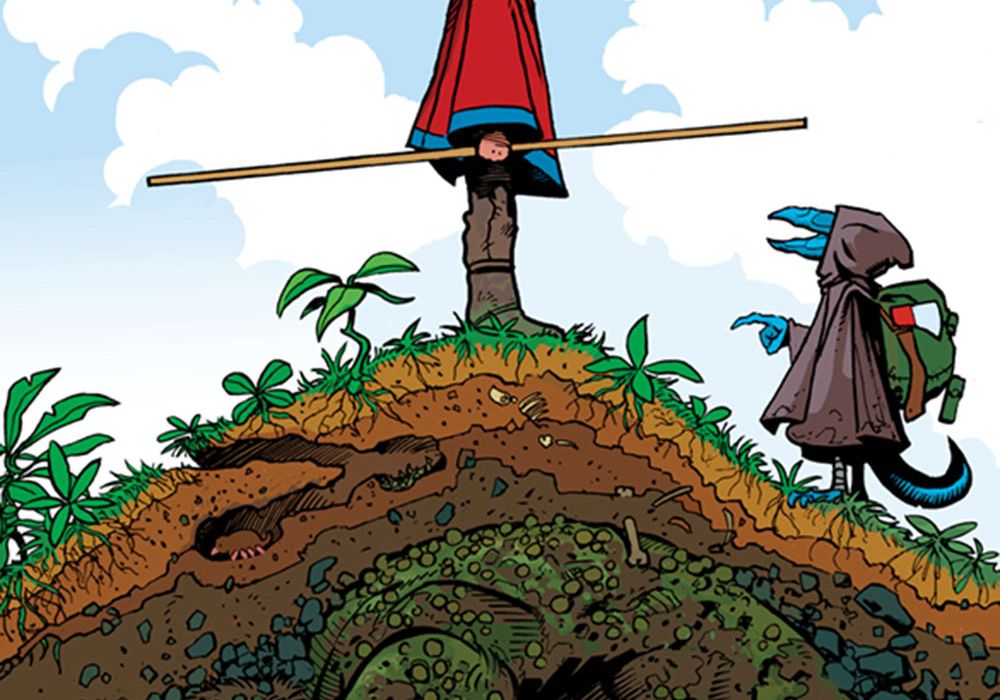 Ken Garing’s “Gogor” has a wholesome all-ages charm that grabs readers from the opening pages of its first issue with a chase across a lush landscape that very quickly presents a high fantasy-infused microverse. Our hero’s steed is a flying shrew while the monocled shock troops that pursue him do so atop red-eyed black insects. It’s a decidedly low tech affair complete with crude non-lethal-looking weapons and a megaphone stolen from the captain of the cheerleading squad. It’s the kind of series opening that so unabashedly owns its non-gritty aesthetic that it constantly surprises with its non-cloying good naturedness. 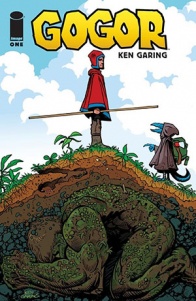 From KEN GARING, the writer/artist of the acclaimed series PLANETOID, comes an all-new ongoing series of wonderfully weird high fantasy! Deep underground, among the floating islands of Altara, the mystical Gogor sleeps. But trouble brews above ground as soldiers of the Domus impose their will across the land. Now, a young student named Armano must awaken Gogor and begin his quest to protect the culture of Altara.

“Gogor” is a radical 180 from the world presented in Garing’s previous and lauded creator-owned work, “Planetoid.” Here Garing not only puts aside harder-edged science fiction themes, but he also opts for a Fisher Price color palette. Emerald greens, fire engine reds, and azure blues abound. The linework is thick and confident. It’s simplified, but not overly so, the hallmark of a master draftsman and cartoonist. None of the panels feel overworked with non-essential details which is not to say that they are sparse. They’re anything but, and there’s a magisterial quality to the rendering of the floating landscapes of Altara that will fill readers with wonder. It truly is a beautiful book, eliciting pleasant visual surprises at every page turn from new settings to eclectic and excellently designed characters.

The pacing of the book is also superb, leading readers to follow the adventures of the cloaked hero to the book’s inevitable climax where readers come face to face with the titular creature from the book’s cover, a cross between an earthen Hulk and the pastoral cousin to the mossy Swamp Thing. The toadstool-pocked creature stands in stark contrast to the streamlined designs of the Domus, the invaders who have finally caught up with Armano (thanks to their yellow jacket mounts) and his companion Wexil, a toucan-beaked and literate blue lizard creature who befriends Armano so easily that a more cynical reader may question whether his actions are genuine. But again, Garing seems to enjoy (at least in this first issue) the unsullied storytelling that springs from characters without ulterior motives. There’s a clear demarcation between the good and bad guys so far with Gogor serving as the elemental, the Godzilla-like creature called into service from the depths to defend the landscape against even greater threats. Could his awakening be more than Armano or anyone else bargained for?

In just one of many refreshing storytelling decisions, Garing also refuses to provide any of the trappings of more modern fantasy stories. There are no maps or convoluted exposition. There’s simply a young and unassuming academic who has been thrust into a crusade against forces of oppression against his wishes. It’s a welcome tactic that recalls a kind of storytelling that leans into mythical archetypes and hero journeys, like the original Star Wars, before it was called Episode IV, or A New Hope, or had sequels, prequels, extended universes, and every other damn thing. It’s a what you see is what you get form of entertainment that is uncommon in our backstory-demanding world. None of this is to say that Garing isn’t planting literal and figurative seeds for more complex thematic elements, but based on this first issue, it would come as a surprise if the story waded into deep philosophical waters. And there’s something that’s more than okay about that, the simple joys of a well-told ripping yarn that rewards readers with twists and turns built from narrative details and visual clues. Take for example the poetic words that wake the Gogor from his slumber. The red butterfly and the choice of the water bottle. Dolni’s spherical abode and communal roommates. This first issue is awash with details that leave room for intriguing narrative threads. Of course, I could be wrong about all of this and there is some sinister stuff afoot. I guess we’ll just have to wait and see.

Speaking of wait and see, “Gogor” has been a long-gestating project for Garing, and by the looks of the world presented in this first issue, he has left himself plenty of room to explore his floating Altaran landscapes and its denizens for many issues to come. I hope he gets a chance to do so because it reads like a real labor of love. I fear that this is the type of book that will go criminally under-noticed and under-appreciated by many comic readers. It shouldn’t. There’s plenty here to enjoy for young and older readers alike.

Final Verdict: 8.5 – “Gogor” #1 is sequential storytelling at its finest. Don’t be fooled by its all-ages charms or overlook its sophisticated presentation.