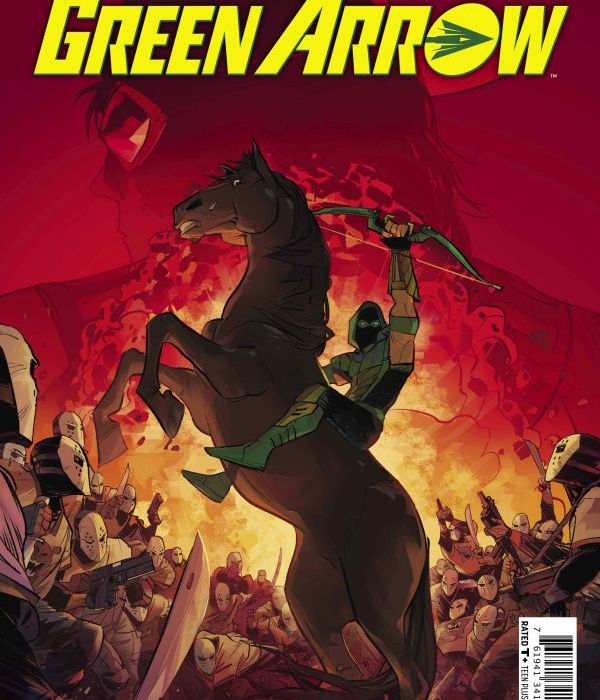 With this issue of “Green Arrow,” the creators shows two stories, side-by-side, that succinctly examine the relationship between Oliver Queen, the Green Arrow, and his former sidekick, Roy Harper, who has moved from his alias as Speedy to that of Arsenal. In doing so, he examines both characters and their failings, showing that no matter how broken they are, they have the ability to build themselves back up again, both individually and as a team. Percy examines each of their histories and how they developed as people, using the perspective of someone who remembers a member of the “Dysfunctional Duo” from their harsher times in the past (Roy and his adopted brother Bird, respectively) and one who knows of how they have developed into better people (Dinah Drake/Black Canary and Oliver, respectively). By showing the heroes, warts and all, but not downplaying their heroism either, Percy allows the reader to see how they have become better people, despite their flaws. 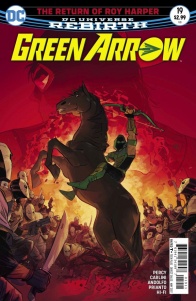 “REUNION” finale! Orphaned as an infant and raised on a Navajo reservation, the superhero Arsenal returns to his adopted home to defend it from a violent militia hired by…Queen Industries?! Oliver Queen’s company has been up to no good since his supposed death, but Green Arrow is on the scene to make things right. Unfortunately for Ollie, he’s the last person his former sidekick wants to see.

In all, Percy’s focus in this issue seems to be less on establishing Oliver Queen and Roy Harper as a team to work together full-time, and more concerned with enabling the two of them to work together at all without resentment and bickering. As Black Canary notes, “In-fighting amongst allies is how we lose,” and only by working together can they fight the threat of the Ninth Circle and Cyrus Broderick’s corruption of Queen Industries.

In spite of the serious and often tragic nature of much of the issue, it is not without humor. Flashbacks to a battle with Count Vertigo adds a comedic and far more whimsical element to the writing, with the ridiculously-costumed Count Vertigo and more lighthearted bickering over the complexity of the famous trick-arrow quiver.

The use of flashbacks helps to space out the different elements of the story, fitting between scenes in the present day to help it all flow better. On top of that, there are elements that run parallel between the disintegration and reintegration of the relationship between Green Arrow and Speedy/Arsenal. Talk of arrogance on the part of them both from Harper in the past parallels the note of their mutual recklessness from Queen in the present.

Eleonora Carlini and Mirka Andolfo do an excellent job of panel and page composition. The dynamic battle at the beginning of the issue is shown in its chaotic frenzy through the use of motion lines, with a particularly chaotic page being one in which Arsenal punches his former mentor. In that page, small snippets of their mutual history are splattered around the page on Green Arrow’s side, giving a quick overview of what they endured together while simultaneously not taking away from the hectic and altogether violent nature of the scene.

On another page, the composition shows another thought process in a calmer scene: Roy Harper’s recollection of the death of his Navajo adopted father to Bird. Rather than taking up space between scenes, this flashback works its way down one side of the page as the brothers talk on the other side of it. The way the flashback is shown, in single panels of Roy’s rescue as a child, to being trained in archery, to the death itself, readers can follow the brothers’ thought processes as they remember what they both assume to be Roy’s drunken crime.

Little touches in the scenes also help to guide readers to certain conclusions. The light glinting off of the arrows further shows both the moral goodness of their looser and acts in contrast to the shaded in shadows of the dirt and grime of the battle with the Wild Dog gang. When Black Canary brings up that Roy should repair his friendship with Oliver, his eyes are seen behind his goggles, adding a human component to relate to him as well as using those eyes to show his internal conflict over the idea of making amends.

Artwork on the flashback’s Count Vertigo goes a long way to showcase how alien and bizarre he is, exactly as the man likely wanted to be known. Arif Prianto and Hi-Fi’s use of the clashing colors, with the dark gray of the skin against the greens and yellows of the rest of his attire and body paint, adds a wide breadth of color to both show what he is like and give a spread of a variety of shades of green in a way rarely seen outside of a Swamp Thing comic. Furthermore, the picture-in-picture analysis of his injury during the skirmish is a brief analysis of how his powers actually work without needing to write a single word, in a way reminiscent of the work of Andrea Sorrentino on the comic during the New 52.

Final Verdict: 8.5 – Excellent case study of the fall and rise of the Oliver Queen-Roy Harper relationship.