‘Return to Haverhill’ concludes with an excellent view in on what could possibly come in the future, as well as developing upon the core themes of the series. 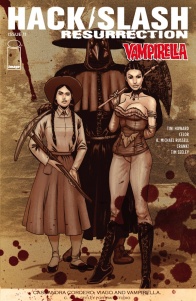 Girls just want to have functional interpersonal relationships. But girls like Cassie might have to settle for vampire slaying. One last team-up with Vampirella in this thrilling conclusion to Return to Haverhill!

Jumping off from the thrilling revelations of the previous issue, Tini Howard uses some atypical storytelling techniques to ease readers into the finale of ‘Return to Haverhill.’ Rather than jump right into Cassie Hack’s troubles with the two vampires she is facing, she instead decides to spend a little bit more time examining a piece of the early vampire-hunting history of her century-old ancestor on her mother’s side, Caraway Cordero. The flashback nightmare, while brief, shows how similar a young Caraway was to her descendent, down to her close friendship with a giant man, her enthusiasm to hunt monsters, and even some of her crasser, teasing vocabulary.

Howard makes excellent use of parallelism from one Cordero monster hunter to another. Dark hair, learning from experience with monsters to find out their weaknesses and brutally dispatch them, losing close friends to the hunt, and ending up alienating almost everyone in favor of focusing everything on fighting monster all amount to a tale that could apply just as easily to Caraway Cordero as Cassandra Hack. With how she is shown in the present day, an irritated hermit after losing her best friend to her hunts, the parallels to Ms. Hack’s voluntary situation at the beginning of “Resurrection” are too many to ignore, demonstrating how badly solitude could ultimately affect the 25-year-old Cassie. Furthermore, the parallels show that the Cordero story repeats itself, whether due to the alchemical solution in their bloodline or due to some other supernatural curse, or perhaps just dumb luck, with Howard’s writing leaving open the idea that maybe monster hunting runs in the Cordero bloodline on some level.

While that opening may make it seem as though the darkness has truly come into “Hack/Slash: Resurrection,” Howard spends the rest of the issue having as much fun as possible, utilizing Cassie and Vlad to show their ability to actually have fun together as close friends, with Cassie even joking around with others as she plays around in a potentially hostile environment, but a relatively peaceful time. Rather than have it move too far from her old ways, Howard merges those fun times with their tried-and-true “act as bait to draw in the target” strategy. The fun-loving attitude goes to show a key element that has been missing from Cassie’s life: an ability to actually accept others into her story, to see that they are willing to fight and capable of doing so. While the lone wolf tactic can work, and the Dysfunctional Duo operates rather well on their own in most cases, having others helps to keep the story relatively light, even when it seems darkest, including some downright hilarious uses of cryptid-hunting tricks taught by Caraway herself.

This levity is not to say that the story is in any way overly lighthearted. It is still a “Hack/Slash” tale, and as such has some very serious matters, mostly on the part of Caraway, as stated above. Howard uses a split narrative in the hunt itself to showcase how differently Caraway’s more careful yet brutal approach functions than Cassie and Vlad’s less cautious “fight when they get there” act works, giving an idea of how both of their tactics can work in their own ways.

Key to this issue is its theme: things don’t have to stay the same, and can evolve over time, rather than be an endless stream of retreads and resurrections of the past. Much like Cassie and Vlad have moved on with their lives, the cast of “Hack/Slash,” even the supporting cast from Haverhill, experience fundamental changes that Howard is sure to acknowledge, setting the stage for great things to come.

Celor’s artwork has improved over the course of “Hack/Slash: Resurrection,” with the conclusion of ‘Return to Haverhill’ showing that improvement in a variety of ways. Faces are more distinct, scenery also more heavily detailed. The most marked improvement is in the use of combat. Whereas earlier issues had movement too fast, too blurred to make out exactly what was happening and how to distinguish arm from weapon, such a difference is much easier to make out with a greater distinction between the two objects, and a heavier focus on the “before” and “after” of a strike, rather than showing us the moments in between.

Celor’s faces are especially well done here, with higher levels of definition on Cassie, Trish, and Caraway’s faces in particular. The emotions shared are therefore all the more impactful, with every smile, scowl, and smirk being almost truly real.

Perspective plays a part in Celor’s artwork as well. From the shocking image at the end of Caraway’s nightmare to a carnival strength test, views from below act in parallel and provoke very different feelings of horror and awe. At other times, a worm’s eye view can be a source of comedy, or a view from above a source of hope.

K. Michael Russell’s colors provide a plethora of different types of scenes. The brownish, almost sepia tones of the tavern in Caraway’s youth show a tone similar to a “Weird West” story of Old West vampire hunting, making the scenes feel as though they almost have a filter over them to appear even older than they are. The dark blues of the night, both in the past and the present, give a definite air of foreboding over entire nighttime scenes, as well as a disturbing calm that can be easily disrupted by the inclusion of foes or splashes of deep red blood. The shadows in Caraway’s modern day home, with the greens and aqua incorporated, have more variety, giving the impression of a different kind of darkness, a more personal one, to Caraway’s lifestyle.

Russell’s different coloring in shocking moments adds to the story in many ways, in particular during the climactic battle. A thrown human body is shown with a softer coloring in comparison to the vampire throwing said body, less distinct to give an impression of moving away. On the other hand, a killing blow in one surprising case leads to a negative coloration, blue on a shockingly assassinated foe in stark contrast against the spurt of red blood that erupts from the victim’s mouth.

The use of bright lights, of the glow of a flame or the sun itself, helps to show the nightlife (and night-unlife) in shining clarity, and also has the added benefit of further improving upon Celor’s better-defined artwork. Washes of orange and yellow dominate scenes with fire or other intense light sources, giving a realistic glare and brilliance to a variety of situations, even to the point of tinting the green leaves of trees outside, or to the intense burns of vampires hit with holy substances not unlike a live-action film. These same lights cast deep shadows, with the darkness of those shadows furthering the realism itself and giving a perspective to it all. In a sense, Russell’s use of light demonstrates a change in some of the tone of this story, at least for the time being. Rather than wallow in darkness, the tales of Cassie Hack and Vlad seem to be striving toward a light, one that can light the way through a sunrise at last alongside others once again.

Final Verdict: 8.5– Moving away from necessary information from previous trips to Haverhill and more toward a general, fun vampire hunting tale in a modern day Weird West setting, ‘Return to Haverhill’ closes with excellent work by Howard, Celor, and Russell.