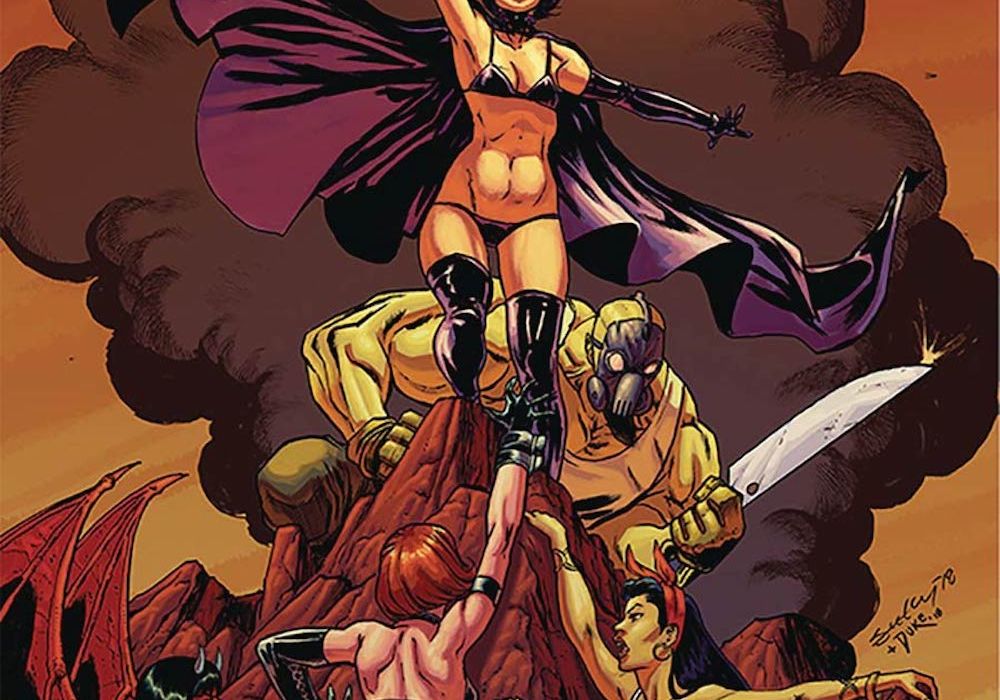 Supernatural conflict hits an apex in “Hack/Slash vs. Chaos!” #4. 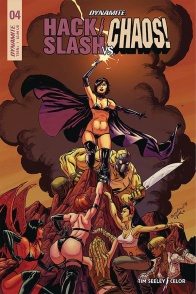 At the Nexus of All-Things, Cassie faces off against Evil Ernie… and her mother The Lunch Lady for control of the blade that could send off of the undead back to Hell!

One of Tim Seeley’s best focuses is his concentration on a variety of complex, intricate emotional bonds, whether between characters or between the readers and the story itself. With the apparent end of undeath nigh, he makes plenty of room for horror, warmth to the heart, awe, and more, while also merging development of interpersonal relationships with combat in a way that he actually had joked about in his “Nightwing” run several years prior.

With the return of Delilah “The Lunch Lady” Hack, Seeley has an opportunity to bring up one of the darkest parts of the Hack family history, not to mention Evil Ernie’s own somewhat similar past. Latching on to that connection, along with the general attempts to look deeper into the “why” and “how” of horror hunting, the writing strikes a chord with anyone who has followed these people, identifying exactly how they have grown and why they need to be careful. Even newcomers will likely be able to see the importance in the revelations brought up, as brief as they are, and feel for the tragedy that has befallen the characters, even if uncertain of their methods for dealing with said pain.

However, not all is overly somber or even tear jerking. Even the darkest of horrors, such as Cassie Hack’s crusade against the supernatural, are tinged with black comedy, from occasional enemies griping at each other to matter-of-fact commentary on how bizarre the situation is. Readers’ dramatic introduction to an ethereal dimension can be interrupted by such mundane commentary as a complaint about a lack of escalators, and the terrible actions brought about by the use of the Draugsplitter are also stopped by a mention of how “metal” the actions truly are for some (and not entirely without reason, either).

After the events of the previous issue, Seeley has an understandably lower number of characters to keep up with. Of course, this does end up causing him to lean relatively heavily on the “Hack/Slash” side of the crossover, which can be seen in two ways. On the downside, it results in the production of fewer openings for newcomers to see how the series both connect to one another and to other crossovers in which Seeley had a part in their occasionally combined universe. On the upside, it allows for a closer examination of the other themes of Cassandra Hack’s own series, most notably her moral ambiguity and her interactions with the supernatural. Furthermore, seeing as “Hack/Slash vs. Chaos!” #4 is the penultimate issue of the miniseries, it is not as if there are many people who would jump in at this late stage in the first place.

Celor’s skill with these series has grown significantly since he first came to “Hack/Slash: Resurrection” in 2017. On the one hand, his mastery of perspective is very important, showcasing various emotional beats, from horror to awe to a vast multitude of other options. The return of the Lunch Lady, along with Cassie’s reactions to that event and to her own (quite literally) diabolical actions, are all shown through the way in which the camera focuses.

However, equally important is the use of facial expressions, from confusion to shock to rage to disappointment or sadness and many more emotions besides. The variety of facial expressions are complemented by the sheer levels of body horror shown by the cast, especially by a certain divine figure, with mutilation of said face being all the more disturbing due to being so realistically shown.

None of this is to say the art is perfect, however. In pages with a vast multitude of characters, Celor isn’t quite as on top of things, leaving the most horrific figures in the “Hack/Slash” mythos seeming a bit too cute or smooth-faced in spite of their histories. Of course, none of this is too important, but the discrepancy is still relatively notable.

Dee Cunniffe’s colors make up for any remaining problems, and then some. On the one hand, we have a green wash in a psychic link between Evil Ernie and another character, which helps to both showcase the supernatural aspect of the meeting and provide an oddly calming experience when contrasted against the more varied palette of the regular world in which the cast resides. The possessing form of the Draugsplitter is shown in pitch black, off white, and ruby red, demonstrating the “fallen” aspect of the turn in many ways, and providing a significant contrast against the multi-colored vortex of the Nexus of All Things. A sword wreathed in divine fire is given a yellow so bright that it shines beyond the other beings in the miniseries, showcasing a very different kind of power from that of most of the supernatural entities in “Hack/Slash vs. Chaos!” as they have been seen to this point.

In all, while “Hack/Slash vs. Chaos!” #4 is not without its flaws, it still is a fun issue that leads very well into the conclusion of this crossover event.

Final Verdict: 8.5– Though perhaps not quite as friendly to newcomers for fairly obvious reasons, the penultimate issue of “Hack/Slash vs. Chaos!” has a lot to offer with a plethora of different emotional beats.