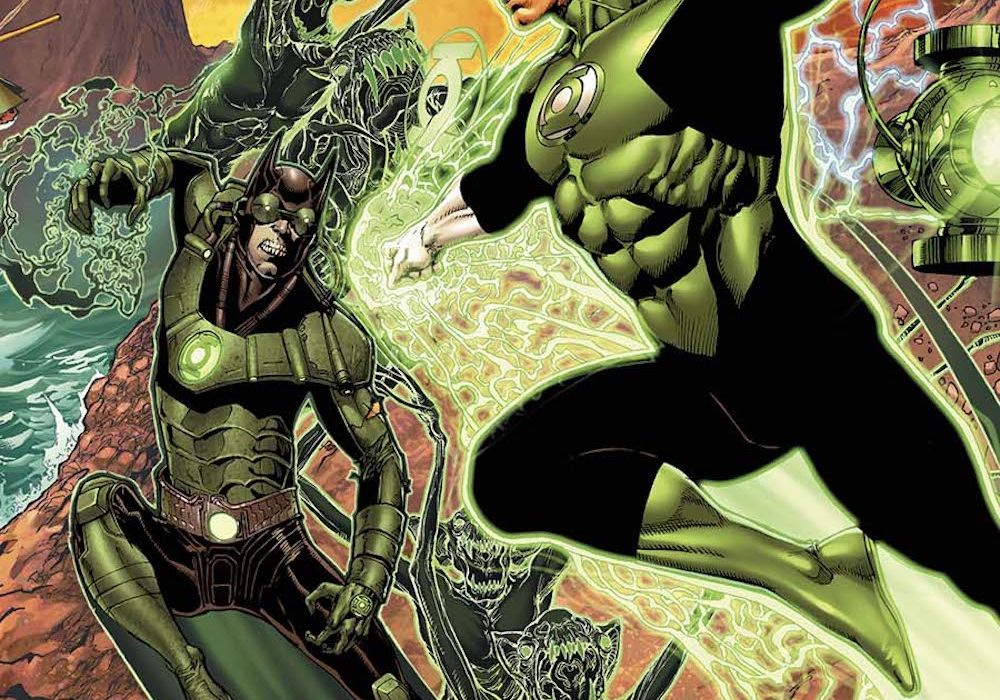 Even though it unfortunately has most of its action off screen, “Hal Jordan and the Green Lantern Corps” #32 still shows an interesting look at the fight between Hal and the Dawnbreaker. 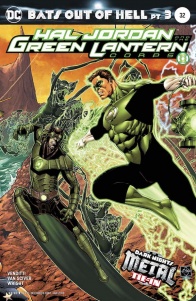 A METAL tie-in! “BATS OUT OF HELL” part three! The Dawnbreaker descends on Coast City, ready to suck its light away before moving on to the rest of our world. Backed up by the power of the Justice League, Hal Jordan stands ready to stop the perverted Lantern—until the Batman Who Laughs steps out of the shadows.

For the second part of the battle with the Dark Knights, Robert Venditti uses issue 32 of “Hal Jordan and the Green Lantern Corps” to focus on Hal Jordan’s struggles against the Dawnbreaker, Bruce Wayne of Earth -32.

First, befitting a tie-in that may not require others to have read previous works, Venditti delves into a relatively insignificant flashback in order to get new readers acquainted with Hal’s life and city. Venditti also gives a brief overview of what some of the Earth Lanterns are like, such as John Stewart’s architect experience, Guy Gardner’s bartending dreams, and Kyle Rayner’s life as an artist. These characters might have only minimal effect on the issue’s plot, but the brief attention to them does help to show that Hal Jordan is not alone as a Lantern, and that he has others who care about him and his city.

By drawing attention to the post-Sinestro Corps War Coast City, Venditti accentuates the idea that fighting against fear is in the city’s very nature, making the artificial darkness and the Dawnbreaker’s reign of terror over the city both more potent in the despair it brings even beyond a corps that is literally powered by fear itself. Aside from this despair, the flashback also calls to mind more hopeful times such as the reconstruction and modification of Coast City an unknown amount of time before, and thereby invokes increased anger at the Dark Knights, in particular the destructive, depressed, and self-centered Wilbur Whately-like Dawnbreaker for his annihilation of the lights of the city of the greatest Green Lantern, the City Without Fear.

The plot is relatively simple, just “continuing the fight against the Dark Knights.” Much like the previous issue of this mini-crossover, “Justice League” #32, there are snippets of information regarding some of the histories of the Dark Knights, in particular the Dawnbreaker. Unfortunately, Venditti’s decision to include some of the corpses of classic Green Lantern villains as having been fought by Hal Jordan as ones also encountered by Bruce Wayne of Earth-32, as well as the fact that he explicitly mentions the other human Green Lanterns of his universe, seems to fly in the face of the idea that he never even knew about the Green Lantern Corps until shortly before he killed them all, which was itself shortly before the destruction of his “minus world” in the Dark Multiverse.

The issue does show some of Hal’s own flaws as well. Venditti does concentrate on how his protagonist can be clever, such as when he uses a “strobe” blinking function on his ring to prevent it from having the light absorbed by the corrupted Lantern. On the other hand, he also can get a bit full of himself, such as the choice to stop using a strategy that was clearly working just because he wanted to make a point about how his light comes from within (or something). Why would he do this, if he were completely aware that the Dawnbreaker has the power to prevent his ring from working? It does serve its purpose, but it kind of cheapens both Hal and the Dawnbreaker by not allowing the latter to find some clever way to subvert the Green Lantern’s strategy, and even more blatant in how the actual defeat is not even shown on panel.

The use of a strobe function in the Green Lantern ring is a clever way to prevent light’s absorption, creating an avenue for the artwork of Ethan van Sciver and Liam Sharp to work hand-in-hand with the vibrant colors of Jason Wright to develop a blind fight, alternating panels having darkness or light. Furthermore, it enables readers to imagine about half of the battle, what constructs the Dawnbreaker made. Furthermore, the reader is left to imagine whatever else could have been in the Nightmare Batcave under Coast City.

The coloring and linework on the corrupted light constructs remains a figurative highlight (though clearly not a literal one). Using a dulled green, Jason Wright creates images of past antagonists while simultaneously showcasing their unnatural nature in comparison to the far brighter light of proper Green Lanterns of Earth 0. The humanoid constructs, such as Hector Hammond, Atrocitus, Parallax-Hal, and Sinestro are given a far darker shade than ones like Karshon the Shark or Dawnbreaker’s claw constructs, helping to make a humanoid face look more inhuman, but also helping a less human construct to be more easily identified.

The images near the end of the issue are especially nightmarish. First, Sciver, Sharp, and Wright give brief looks at the homes of the various kidnapped Justice League members and how they have each fallen to a specific Dark Knight. Then, the closing page of Cyborg being tortured by the Murder Machine and the Batman Who Laughs, with its blurred red lights and glowing brain matter, demonstrates how disturbed and evil the Dark Knights can truly be when left to their own devices.

On its own, “Hal Jordan and the Green Lantern Corps” #32 is a pretty good issue. While the story has some rather significant holes when taking into account “Batman: The Dawnbreaker” #1, the artwork helps to pick up the slack.

Final Verdict: 7.0– Though lacking in some story consistency, the artwork of “Hal Jordan and the Green Lantern Corps” #32 helps to keep it up to par with many of the other issues in the ‘Dark Nights: Metal’ event.