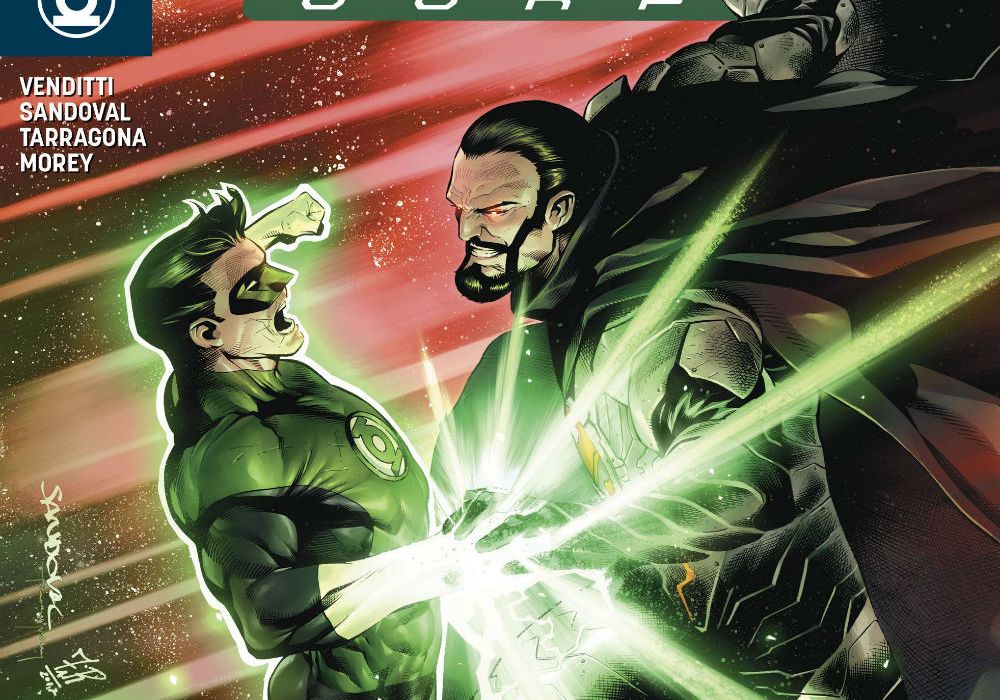 “Hal Jordan and the Green Lantern Corps” has been, since its Rebirth launch, a love letter to the four human Green Lanterns, as each arc progressed their individual struggles and battles. But will the current storyline, dealing with a confrontation with Zod and his House refresh the book from what is becoming a somewhat formulaic approach? Signs point to yes! 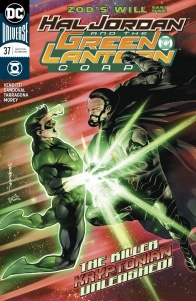 ‘Power of Zod’ part one! After a recent battle with Superman in Action Comics, General Zod recovers as he takes control of a small, undeveloped world. When Hal Jordan investigates, it sets the course for a confrontation between the Kryptonian warrior and the Corps’ bravest and brightest Lanterns.

The most refreshing aspects about issue #37 is how quickly and intensely the challenge of Zod is presented to readers. While past arcs of “Hal Jordan and the Green Lanterns” have taken their time on setting up the villains, motivations and danger, here those elements are put upfront, to great effect. There main reason why this works is that Zod and his House are well-known properties, even appearing on other DC books at this time. Venditti’s script recognises that and assumes readers have enough knowledge of their back-story and avoid unnecessary exposition, rather choosing to convey recent plot points and developments through the banter these characters exchange.

Before going too much into the plot and characterisation, praise should be given to colorist Tomeu Morey. Colors, lightning and shading are pitch-perfect, which is particularly critical in a book with Green Lanterns. On every occasion of power display, the pages feel electric, bursting at the seams. Color effects are also very well done in quieter moments: a scene depicting the proverbial calm before the storm illustrates a sun set and the overall atmosphere of a pacific planet, soon to be turned into a battleground.

Rafael Sandoval is no stranger to Green Lanterns either and it shows. Each main characters looks distinct and much can be learned about their attitude and way of thinking simply by how they carry themselves. On this issue, Hal and Kyle are paired together, while John and Guy have less screen time. Still, on those interactions, the contrast among them (Hal’s brashness to Kyle’s thoroughness, Guy’s bravado to John’s planning) are translated into facial expressions and body language. The same can be said about the cast of villains, with Zod being larger than life, while the Eradicator is depicted as a stoic, almost unshakable force. When the action takes centre stage, in a couple of splash pages, they really explode: the aggressiveness and surgical method that Zod and his allies attach is fierce and compelling.

Back to Venditti’s story and plot. This series as a whole has delivered on the space cop stakes and drama, but it has fallen as of late into a formulaic approach: heroes finds challenge, challenge escalates, heroes overcome it, showing how the power of friendship and toughness can prevail. And while that is not necessarily a bad thing, it does suffer from diminishing returns, as it robs any sense of real danger. Here, though, the formula is at least partially flipped, as there is strength and cohesion on the House of Zod, so that sense of family is not exclusive to the heroes. It does paint the challenge with new lights that will hopefully pan out over the subsequent issues of this arc.

The issue’s sub-plot, focused on John’s reactions to the return of the remaining Guardians to Oa works really well. John Stewart has been one of the most developed characters of this series as Corps leader, from his initial challenges on putting the group back together, through his peace agreement with the Yellow Corps and to the recent battle with the Controllers. It is only natural for a seasoned leader such as him to clash with returning authority figures; the seeds for future debates are certainly been planted and it will be interesting so see where their interaction is taken from here. Chances are that it will avoid the more classic “us versus them” approach and incorporate that both Guardians and Lanterns have contributing voices to the Corps leadership.

A smaller note on dialogue. It is clear that Venditti enjoys writing these characters and that translates into some truly funny and interesting word play. In one particular moment, the war-hungry members of the House of Zod debate why the Lanterns choose a ring (rather than a sword or a gun) as their primary weapon. In the mouth of a different villain that would come across as flat, but here it works. Also, the back and forth among the human heroes would have felt forced at places, but since the series already successfully established their strong bonds of fellowship, it only reinforces their characterisation, rather than deflecting from it.

Final Verdict: 7.5. – “Hal Jordan and the Green Lanters” #37 shows promise in changing the recent pacing choices of this series, which were becoming stale. The high standard seen on illustrations and colors are certainly a backbone of this issue, which delivers on action, challenges and internal disputes.