Though a good dose of lore, the ability for newcomers to the franchise may be the real “collateral damage” of this Halo miniseries. 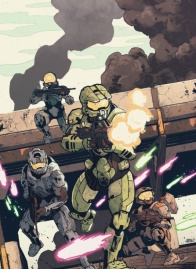 The Master Chief and Blue Team are deployed by the UNSC to Alpha Corvi II, a precarious human colony world, seeking to halt the Covenant’s efforts to uncover something hidden below the planet’s surface. The Spartan strike team quickly finds out that they will have to rely on each other and a small cadre of human rebels in order to survive and complete their mission.

As stories go in the Halo franchise, “Collateral Damage” fits into one of the common molds: that of an early mission for John-117 and his Blue Team friends. Alex Irvine sets the stage for his miniseries, providing some juicy lore and explanations for fans of the franchise to latch on to, in particular explanations regarding MJOLNIR armor suits following the tragic events of their early careers and other ones of prototypes for armor enhancements that would not go into production on a grander scale until decades later. Irvine definitely knows the lore of the franchise, jumping between different names of known SPARTAN-II super-soldiers and name-dropping groups like the Insurrection factions and one of their leaders.

Unfortunately, the fact that established fans can easily jump into the series does not really say much for newcomers or those who are more tangentially attached to the lore. Minimal attention is paid to the Insurrection’s antagonism, but the main problem is instead a lack of much concern about having any explanation for half of the existing fiction. What is the Insurrection? What is this “Watts” mentioned? Who is this “Nora” hologram? Who are the soldiers’ commanders? Who are the soldiers themselves?

None of this is really explained, with readers expected to have a grasp on the existing canon to know enough. While perhaps this is enough for seasoned Halo fans who look through many different parts of the fiction, those who do not know much, or even those who only play the games, are in danger of being hopelessly lost on many of the issues presented. Yes, an exposition dump would be out of place, but perhaps some sort of glossary in the back to give the most basic information would not go amiss, even a line or two on some of the concepts presented. While there is a dramatis personae section in the front, all it really tells is the names of each individual in the issue for sake of helping people distinguish individual’s appearances.

David Crosland’s thick, rough artwork helps to place the miniseries as an early story, metafictionally showing a “rough-around-the-edges” thought process regarding the Human-Covenant War’s beginnings. The Spartans and the Insurrection don’t know much about their enemies, so it makes a kind of sense for the whole conflict to be shown with a rougher pencil. Furthermore, the use of many different enemies in the battle sequences help to enhance the feeling of chaos with the aforementioned roughness.

On another side, Crosland’s art makes minimal use of facial expression in most cases. The stoic facades of the UNSC troops act as a nice counter against the more fearful and overall emotive wide eyes and shocked or angry expressions of the less disciplined insurgents.

Crosland’s use of paneling is rather inventive, especially when it comes to debriefing Blue Team. Using a combination of Yao’s eyes over the background, a general overview of the island where the fighting is taking place, and a close-up of the Covenant assault, he shows a variety of different levels of detail, almost looking as if a scene is zooming in on the conflict despite being a series of still images.

Leonard “Len” O’Grady’s colors are particularly vibrant. While a varied color palette is in no way strange for the Halo franchise, with its deliberate avoidance of dark and dreary colors except where absolutely needed, the different locales in “Halo: Collateral Damage” #1 alone allow for many different schemes. Dark grays and brilliant reds help make up a military procession, with lighter colors used by Doctor Catherine Halsey’s coat, contrasting against her dark brown hair and bright blue eyes.

O’Grady shows classic greens of MJOLNIR armor through a variety of shades depending upon the lighting around them, making them all the more lively in the process. Contrasted against that green and other MJOLNIR colors, the forest green of the island of the mission works well alongside teals, purples, oranges, and light blues of the Covenant troopers and their vehicles, emphasizing their alien nature while also allowing them to fit in well enough with the setting, invaders rather than altogether out-of-place.

The active camouflage unit allows O’Grady to make use of some interesting styles, with transparency and simple green-yellow filters playing a big part in its portrayal, alongside the use of silhouettes mixed in with more visible, fleshed out images of other people or scenery. Furthermore, O’Grady’s use of a sepia tone for flashbacks is a classic, always welcome for various kinds of media, and definitely at home here.

While “Halo: Collateral Damage” #1 has a dynamic story with some minor doses of humor peppered in, the art and colors are what really help the issue stand out in this starting point for the miniseries. Sadly, it seems that the true “collateral damage” of this Halo comic is the comprehension, and thus interest, of potential newcomers.

Final Verdict: 6.5– Although the artwork is well done and the colors are appropriate, “Halo: Collateral Damage” #1 is definitely written for established fans, leaving little room for people to join in on the franchise.