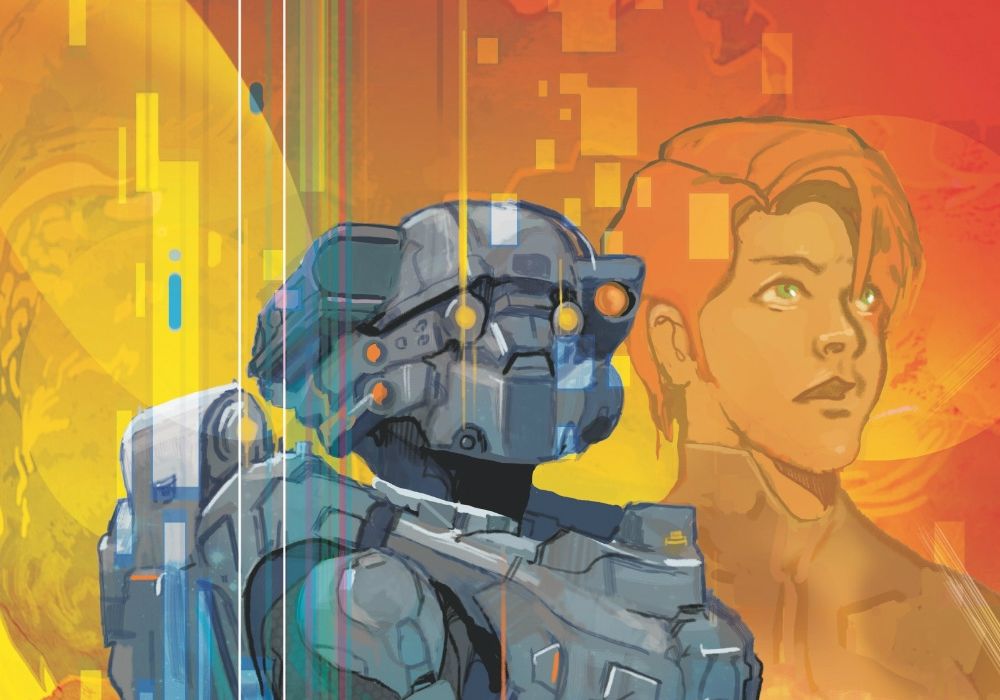 With a slow, steady pace, Anne Toole makes her mark on the Halo universe in “Halo: Lone Wolf” #1. 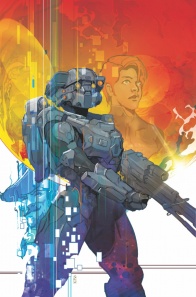 Sent on a covert mission without the rest of her team, Spartan Linda-058’s skills in infiltration and marksmanship are called upon to end the threat posed by a wanted scientist on a distant planet. With only an ONI AI at her side, Linda must fight through both the dregs of the Covenant and the hostility of a lost human settlement to stop the rogue scientist in his tracks.

Despite being better known for her work with video games such as Horizon Zero Dawn, Anne Toole is fully capable of adjusting her storytelling ability to the comic book medium with “Halo: Lone Wolf” #1. Her style requires very little in the way of prior information, allowing readers to jump right in and submerge themselves in the post-war landscape of the Halo franchise.

The majority of this debut issue focuses in on Linda-058’s character. Toole examines her somewhat playful attitude around her fellow Spartans in training when balanced against her expertise with her rifle even at relatively close range. Various moments over the course of “Halo: Lone Wolf” #1 showcase Linda’s humanity under her professional demeanor, from the aforementioned friendliness with her fellow Spartan “family” to thinking back on her childhood in comparison to the actions of a group of colonists in trouble. Do these actions, especially in the midst of conflict, betray her professionalism, or is her mission-based attitude overcoming her essential humanity? Toole seems able to go either way at this point, adding a level of complexity to the super soldier’s mission that may have been overlooked by some other writers.

The examination of Linda’s character works in contrast to her artificial intelligence aid, Athos. The holographic being acts as the John Watson to her Sherlock Holmes, asking why she is acting in one way or another over the course of the ONI-given mission, and provided with the information necessary to understand her actions, even if they may appear to be contrary to what is needed. By having Athos question many of Linda’s actions or inaction as part of the infiltration to lead up to the assassination attempt itself, the artificial intelligence provides the lens of someone new to the Halo franchise who may have thought it were more gung-ho, in contrast to how the Spartan herself is in many ways a surrogate for the veteran Halo fan, providing insight into the intricacies of the Spartan thought processes and instincts, as well as those of a seasoned sniper. For example, being wholly concentrated on the mission does not necessarily mean being entirely emotionless, nor is the inverse true. Furthermore, having experience in combat is not the same thing as wanting to kill every single possible enemy with little restraint.

Toole uses the sniper’s perspective to allow for another important element: patience and pacing, as shown in the dialogue itself from the opening page with the note that conflict “isn’t a race” and should be gone through “slow and steady” to achieve success. Rather than speeding through and using little more than bloodshed to tell the story, she uses the relatively slow pace of Linda’s advance to allow room to look at the side of the humans on the planet she is infiltrating in the first place, to see their side of things (albeit filtered through the protagonist’s point of view). This slower pace gives room for a slow build of tension as the humans are attacked not only by the alien Covenant remnant forces, but also by Linda herself, the drama of the piece expanded upon with readers wondering at each stage of the conflict whether or not Linda-058 is going to open fire on the humans to fulfill her intended goal, as Athos is aiding her in performing in the first place.

Kieran McKeown’s artwork helps to lift up Toole’s intriguing script even further. His lines are thin and intricate, working well with scenery and characters alike. On the subject of characters, every person, with or without face-obscuring helmets, feels “real,” the thin lines providing a lens to give detailed facial expressions or a variety of pieces of body language to give a look in on emotional depth regardless of how much of the people readers can actually see.  On the scenery, the details range from just as complex as the character models to unfocused and blurred into the background, much in the way a camera might focus on one part of a scene or another, or to use an imprecise image of a planet surface from space to give an impression of its sheer size and beauty.

Even more important is the use of perspective. The camera focus that McKeown utilizes in general differs greatly from scene to scene, from panel to panel. He can take a first person perspective from the point of view of a Spartan, a worm’s eye view to intentionally deceive readers a bird’s eye view to see a fuller view of the landscape of a battle, and more.  Even the paneling itself can be a source of tension, such as Linda’s slow aiming process being shown in several panels around a single, larger panel of her target’s speech.

Dan Jackson makes very good use of color in “Halo: Lone Wolf” #1, with different color palettes depending on the scenario. The mission itself has a pretty wide one, ranging from red grass to gray faces to brown, blue, yellow, and more depending on what is going on, along with the beauty of a changing sky across the night and day on Sephune III. On the other hand, the colors inside of the UNSC ships have a more muted blue, with the exception of Linda and her red hair and brown armor. In a sense, the colors show how she doesn’t fit in with the quasi-sterilized atmosphere of the briefing rooms, and is more at home in the training simulations or on the ground on the aforementioned planet.

Final Verdict: 8.0– A good look at the post-war Halo universe that is welcoming for newcomers and utilizes a more patient pacing, “Halo: Lone Wolf” #1 is a good jumping on point for the franchise’s comics.