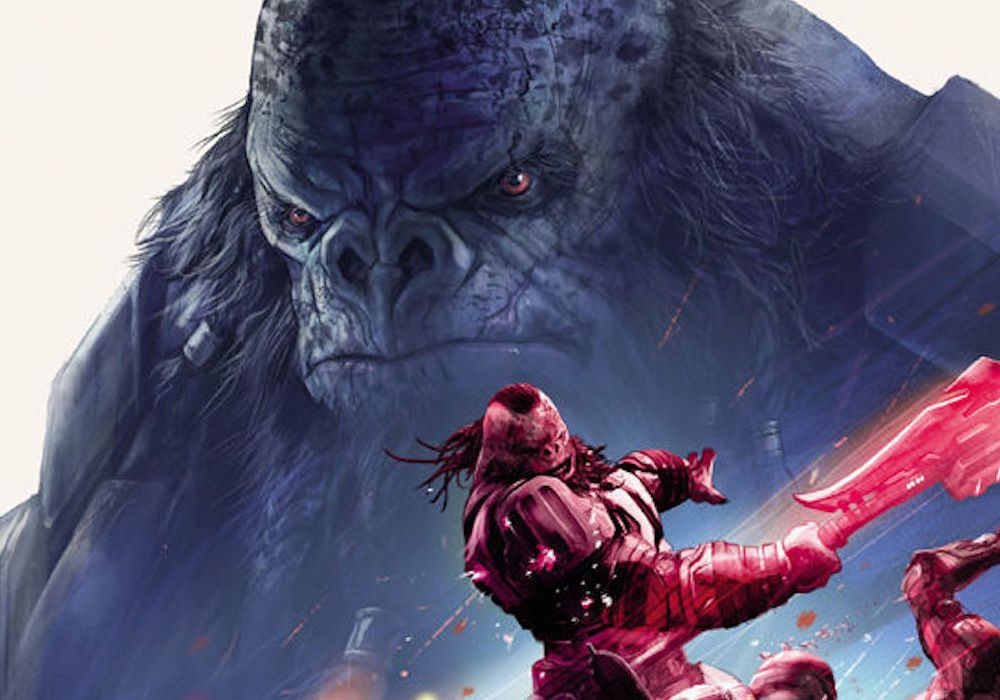 Though a heartwrenching story on its own, “Halo: Rise of Atriox” #1 does not give much new information on its eponymous antagonist. 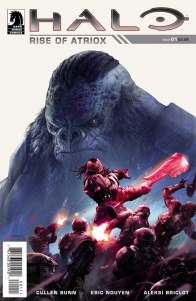 An anthology based on 2017’s Halo Wars 2, the real-time strategy video game from 343 Industries, which introduced a new ruthless villain, Atriox.

Atriox, the legendary Brute under the command of the alien collective known as the Covenant, leads a Brute assault against a UNSC military outpost. Wave after wave of Brutes are lost attacking the human outpost defended by a group of UNSC marines, the ruthless Atriox soldiers on. As his comrades fall, Atriox’s hatred for the Covenant grows.

*Ties in to new Halo Wars 2 video game for Xbox One. Released in February 2017.

Cullen Bunn’s writing on “Halo: Rise of Atriox” #1 has an interesting amalgamation between military science fiction and horror, creating one of the darker stories of the Halo franchise.

Using the lens of Sergeant Kress, Bunn presents a disturbing last stand. As numbers dwindle from roughly fifty-three toward zero, Bunn’s script shows the hopelessness of humanity’s attempt at survival. The UNSC forces are panicked, as is common of this kind of plot, but Kress’s forced stoicism and the reports of the artificial intelligence Beatrix give a different, more stable interpretation of the carnage.

Bunn says as much through dialogue as he does through its exclusion. By not showing most of the deaths on panel, Bunn’s script demonstrates the hopelessness of any attempt to keep order as well as the impersonal nature of some command structures. By not having higher command officers on the side of the UNSC answer or even comment within the issue itself, he reinforces both the isolation of the remaining troops and the coldness of the high command. By having Kress lie in the face of impossible odds, saying that there are higher numbers of human forces than there actually are, Bunn shows how hard keeping order is in the face of certain death, as well as Kress’ willingness to sacrifice honesty for stable leadership.

The interpretation of the Covenant is similarly very telling. Like many stories in Halo, the languages of the Covenant are not translated into a human one, instead shown through odd symbols with the exception of those near death. However, more important is the fact that even that form of dialogue is used extremely sparingly, only coming up once. Instead, the Brutes under Atriox kill nearly without a single word, giving the impression of a dangerous force that cannot be reasoned with and does not have an ounce of humanity.

As it is, this presentation of Atriox is rather bizarre, given he is the eponymous character of the miniseries. For an anthology presumably focused upon his rise to power, Bunn’s presentation in this first issue seems to focus on him as an unreasonable, unstoppable force of destruction, rather than expanding on his character in any way. Though the story in Part 1 of “Halo: Rise of Atriox” is disturbing, it doesn’t really provide any information that people aware of the character of Atriox do not already have, beyond his willingness to sacrifice as many troops as possible to achieve his goals (whatever they are).

Eric Nguyen’s pencils invoke a gritty realism that fits well with the war-torn backdrop of the story. Deep shadows mark various areas of the desert landscape and human base, showing the mortality of each of them. Even dirt and grime is portrayed well against the armor human bodies, showcasing how thoroughly broken the front line has become while also demonstrating the fact that humanity refuses to go out without a fight. The darkness also contrasts well with the ethereal glow of the unit’s artificial intelligence unit, Beatrix’s avatar having softer penciling than more physical combatants.

That isn’t to say that the artwork is presented perfectly. Nguyen’s use of outlines can be distracting against darker backgrounds, with a light outline in a dark shadow making individual people seem to be cut and pasted into the scene, especially in contrast to the more organic fire and light effects.

Jeremy Colwell and Lee Loughridge’s work on the colors of this first issue of “Rise of Atriox” helps to make the art where pencils may not have been enough. The grim coloration of the UNSC armor, its blacks, grays, browns, and greens, provides a good contrast to the surroundings and others in the story. Colwell and Loughridge use even darker colors for the Brutes under Atriox, to show their utter evil, their “Brute plasma rifles” shooting their customary red fire with a glow that could be easily misconstrued as high-tech hellfire. In direct contrast, Beatrix has a heavenly blue glow, much like the holotable from which she projects herself. Although this bright color is standard of UNSC smart artificial intelligence avatars, its vibrancy is nonetheless pronounced.

Colwell and Loughridge’s background coloration varies in its effectiveness. Darker areas such as the inside of the base have a good juxtaposition against the holograms, but as mentioned above, they do not work well with some of the outlining provided by Nguyen, sometimes to the point of distraction. On the other hand, the fights in the open air have a very good contrast of colors, allowing for easy viewing of the combat and a look at the hopelessness of that era’s humanity, not unlike the final mission of Halo: Reach.

The art makes good use of visual effects, with the glowing lights of fire and holographic interfaces making a good show of how they are ethereal and to a degree untouched by organic life.

In all, this first issue of “Halo: Rise of Atriox” provides a good story as a random fall of a human base to Brutes with a rather good visual presentation of that conflict, but does not really provide much in the way of new information about the character its name implies will be further explained.

Final Verdict: 7.0 – A gritty monster story told through the lens of a war, “Halo: Rise of Atriox” is an interesting introduction to the eponymous character, though with an odd perspective for an origin that does not provide much in the way of new information.