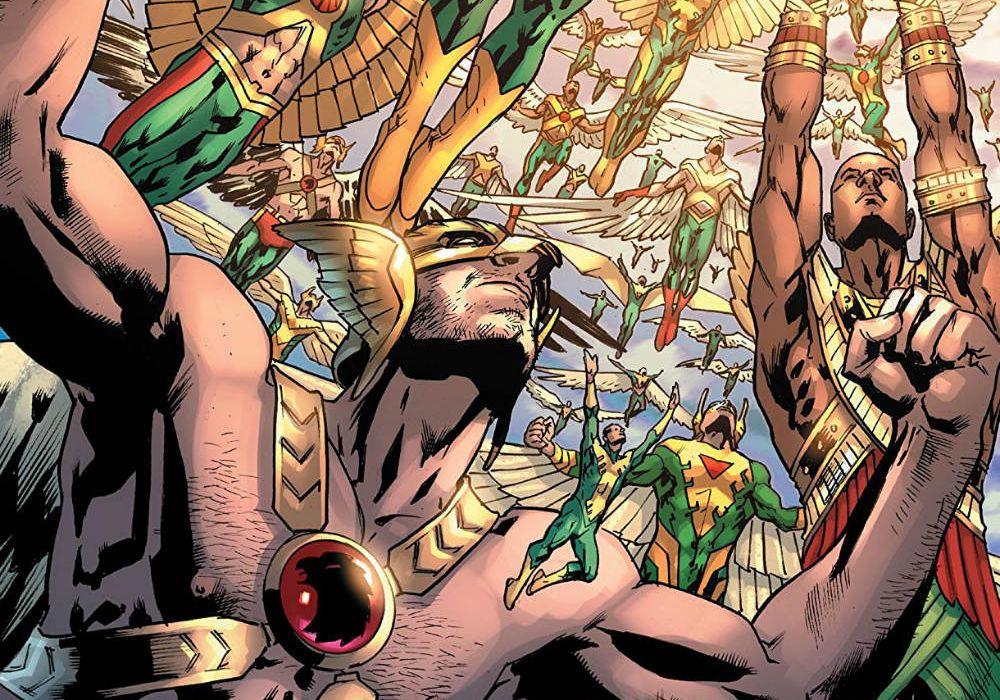 This is it. The end to the redefining arc of Hawkman by Venditti, Hitch and team manages to keep its top-notch quality consistently all the way down to the finishing line. This one is a keeper. 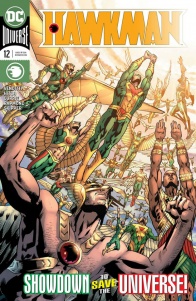 With the battlefield split, Carter and his past lives put together a last-ditch plan to stop the Deathbringers once and for all, but if it should fail, Earth will be doomed and the universe will fall into the hands of the Deathbringers forever!

There are some elements that speak to the core of what a super-hero comic book is. The hero’s journey. The larger-than life stakes. The ever-present and looming continuity overload. Through the last twelve issue, and most certainly on this closing one, Venditti, Hitch and team have embraced those elements to produce a character-defining arc, one that will be used for future generations as a way to introduce new readers to its mythology. It is a great feeling to see it wrap so effectively, while still opening doors for future stories and events.

First of all, in an age of delays, shifting contributors and volatile art quality, it is commendable to reflect that Hitch has not missed a single issue (or page, or panel), including all covers for this story. While it does not speak of the issue itself (or even the entire series), Hitch had not been known in the past for his timeliness, as fans of Marvel’s “Ultimates” can certainly attest to. Despite that, the artist managed to hit a balance between his detailed and realistic approach with pace and rhythm.

It is a curious result to watch, including with “Hawkman” #12. While the art surely remains detailed – some aspects of the London skyline and alien vessels are mind blowing – there is a clear restrain on adopting that approach to every single page or panel. It is almost as if Hitch becomes a marathon runner, fully in control of when to move faster and when to zoom in on the nuance. It could have easily translated into uneven pages and inconsistent character facial expressions, but it does not.

On this particular issue (and also on the one that before it), Hitch could play with a multitude of past incarnation of Hawkman, some of them drastically different, yet some sharing more similarities than contrast. On another high note, Hitch was able to keep them distinct, either due to a slightly different costume design, body posture or some other detail. It shows a level of planning around design that really played out into these later chapters of the book.

Skipper on colors certainly collaborated to keep that consistent tone throughout. While not as flashy as some of his peers, Skipper is excellent at using color for depth, and to tell different location and terrains apart, and utilises some digital techniques on pages towards the end as a spoiler-related even affects Carter Hall.

Venditti’s script and character’s grasp are just as strong. Since the beginning, the writer has chosen to adopt Hawkman’s often convoluted continuity as a strength rather than a crutch, making his past lives and conflicting experiences the crux of the story. With “Hawkman” #12 this investment reaches its ultimate pay-off, where the multiple life of Carter Hall literally come together to face their ultimate foe. In the process, readers get to witness heartfelt conversations about fate, destiny, and how to shape them, not to mention how one can learn to evolve and forgive past mistakes in the context of a larger good.

Towards the end, the arc does something that most current comics forget… it continues! Although this story is firmly done, it concludes with a new strong antagonist, a new mission statement, and a number of pathways that Carter Hall can explore. It is extremely refreshing to see a character so firmly based on core comic tropes (and, actually, the pulp stories of old) rekindling that aspect of continued serials that is overlooked by so many.

With its beautiful and consistent art, which knows when to ramp-up the scale and detail, but also to be more subdued to ensure timely delivery, combined with a plot, scrip, and dialogue that remains absolutely consistent from start to finish, “Hawkman” #12 comes full circle with its opening arc. It could easily be called Rebirth, in the same sense that “Green Lantern” was reintroduced over a decade ago, as it truly embraces some of the characters most difficult aspects, and transforms them into the banner of his return.

Final Verdict: 8.9 – Venditti and Hitch have mashed so well as a creative team that they disappear individually, the same way that the many lives of Carter Hall bring this story to its epic conclusion.